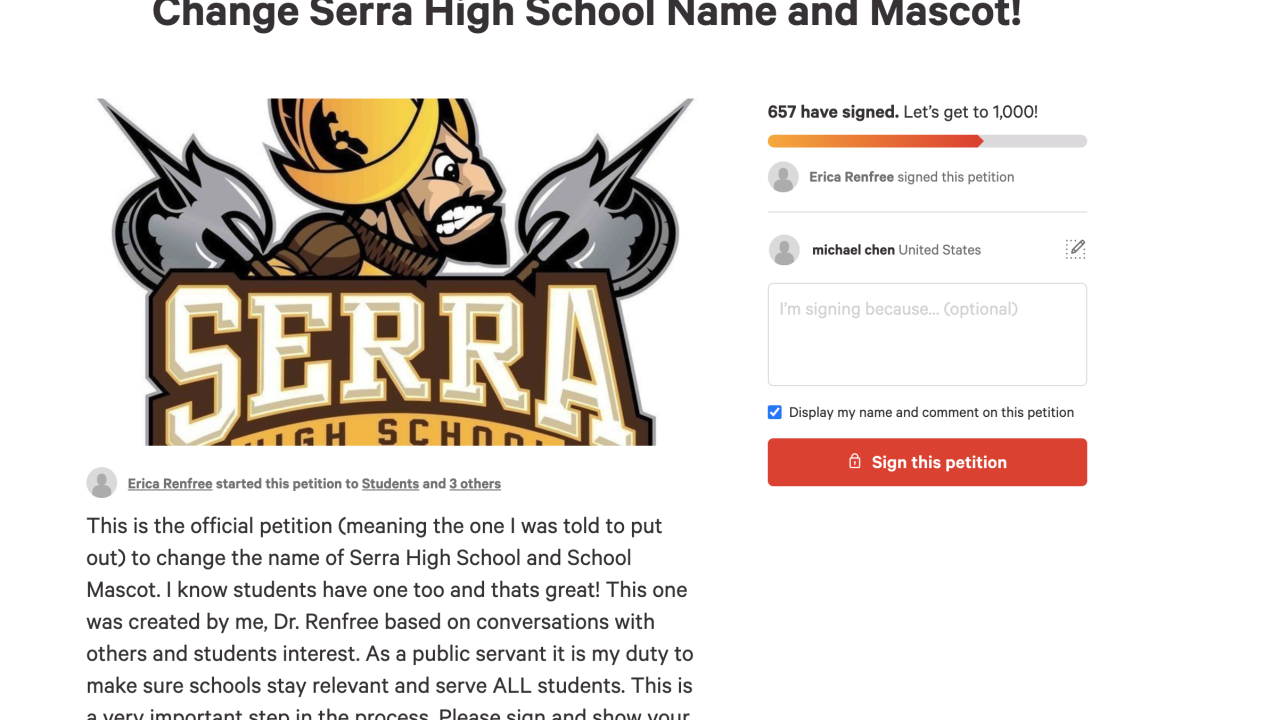 SAN DIEGO (KGTV) - Amid the national conversation on systemic racism, there is growing momentum for a campaign to change the name of a local high school and its mascot.

Recently, sisters Emma and Charlotte Taila described the time to act as "a now-or-never moment."

Emily is a recent graduate of Serra High School. Charlotte is an incoming junior. They started a Change.org petition drive, reviving an effort to change the school's mascot, a conquistador.

"[The mascot] represents Spanish colonialism and the brutal impact that it had on Native Americans," said Emma.

The numbers of signatures climbed quickly, and then, they got some surprise backing from school leadership.

"She liked the mascot change and wanted to go a step further and go for a rebranding," said Charlotte.

"She" is Serra High principal Erica Renfree. In an email to the school community, she proposed not just a mascot change, but a name change to Tierrasanta High School.

"With the establishment of missions, he participated in a lot of cultural erasure and violence again Native Americans," said Emma.

In the past week, protesters have toppled statues of Father Serra in San Francisco and Los Angeles.

In a statement, the California Catholic Conference of Bishops said "... the historical truth is that Serra repeatedly pressed the Spanish authorities for better treatment of Native American communities ..."

For some students, the other parts of his legacy demand a change.

"There are better options of leaders to honor with the name of our school that better represent our history and who we are as a school," said Emma.

10News reached to Mission San Diego de Alcala to see if they plan on removing their statues to protect them, and are waiting to hear back.

Virtual town halls are scheduled to discuss the proposed changes with staff, parents, and students. A San Diego Unified School District naming committee will review the submitted proposal. The full school board will have the final say on any changes.