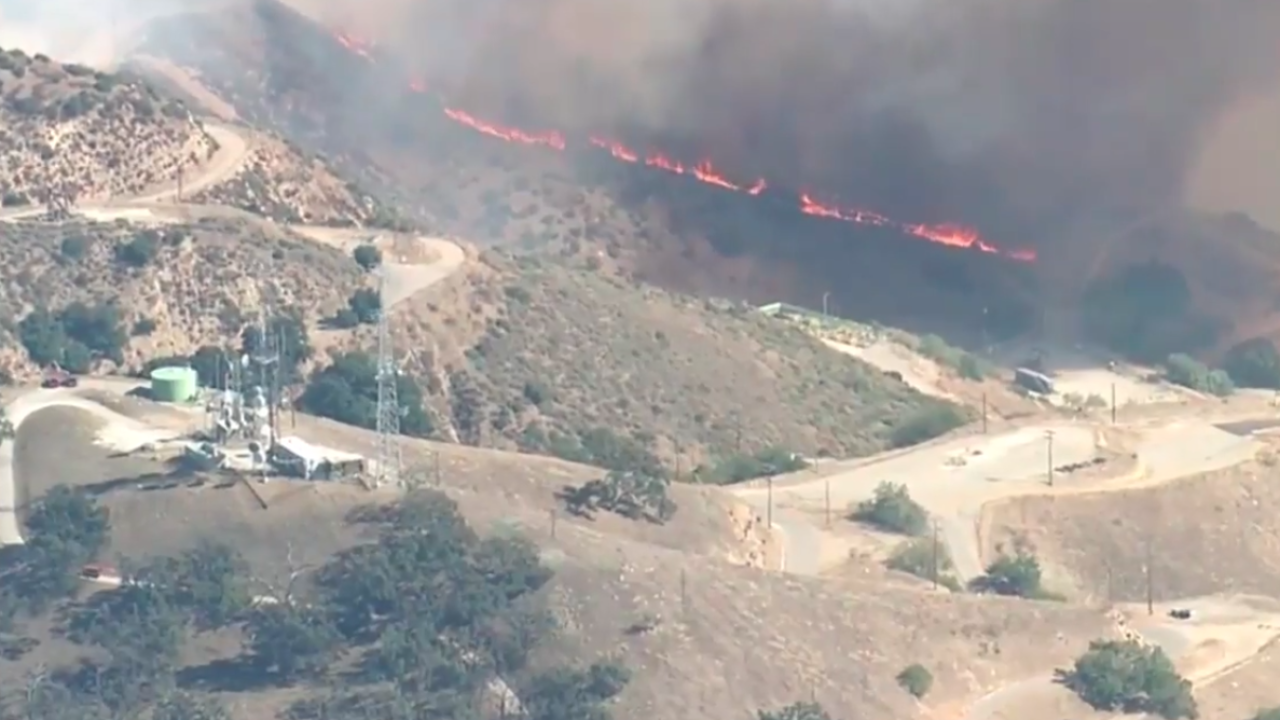 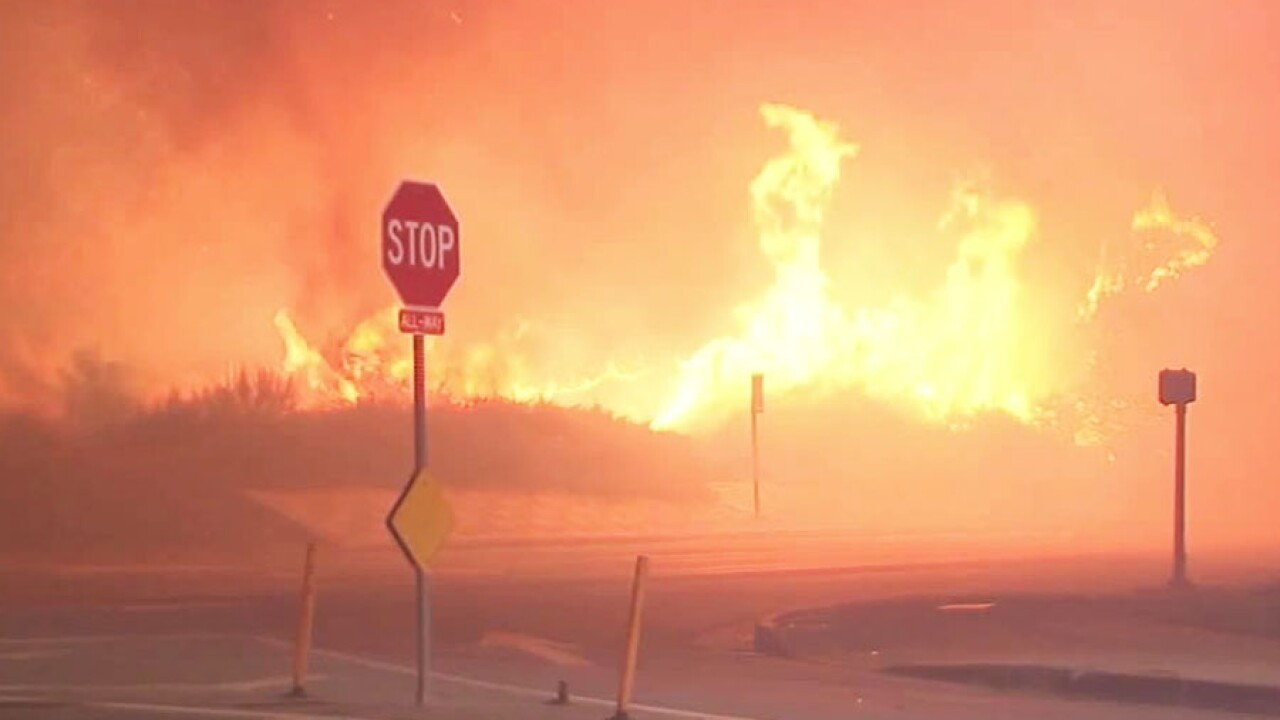 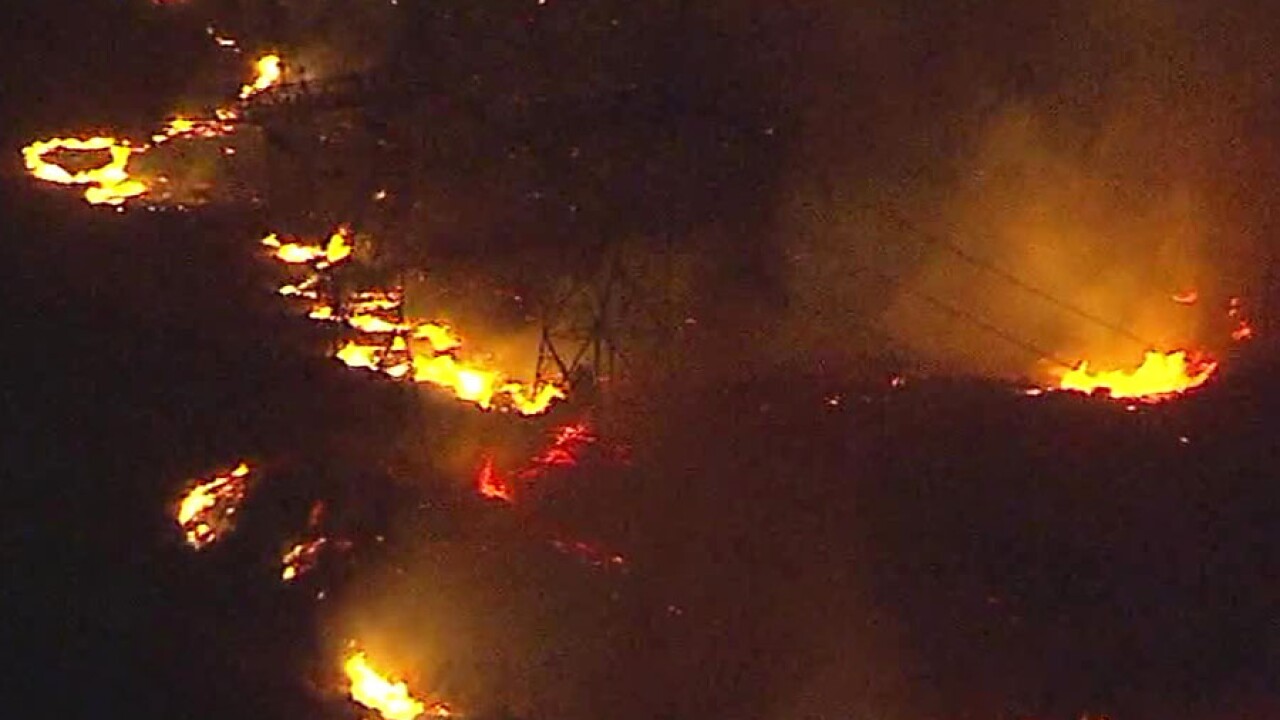 -- The Saddleridge fire has burned 7,542 acres and is 13 percent contained.

-- Saddleridge Fire has scorched more than 4,700 acres with no containment

-- One person, described as a man in his 50s, died Thursday night while speaking to firefighters, possibly while working to protect his home

-- Roughly 1,000 firefighters have been deployed to battle the flames

-- Eight water-dropping helicopters have been deployed, and fixed-wing air tankers were also being sent to the fire

-- At least 25 homes have been damaged/destroyed

According to the CHP, the following roadways are closed:

-- Southbound SR-14 shut down through Newhall Pass (at Newhall Avenue)

-- The Old Road at Calgrove Boulevard

SR-118 was reopened in both directions; northbound I-5 connector to eastbound SR-118 also reopened

People who are evacuated are reminded to have identification with them, along with their medicine, because they will not be allowed back into their neighborhoods until authorities deem it safe.

PORTER RANCH, Calif, (CNS) - A wind-driven brush fire that exploded across more than 4,700 acres overnight continued to rage in the northern San Fernando Valley Friday, forcing the evacuation of roughly 100,000 people and closure of multiple freeways and schools, while causing at least one death.

The blaze was reported just after 9 p.m. Thursday off the westbound Foothill (210) Freeway near Yarnell Street and Saddle Ridge Road in Sylmar and quickly spread due to wind-blown embers that jumped the Golden State (5) Freeway about 11:20 p.m., spreading the flames into Granada Hills and Porter Ranch, according to Margaret Stewart of the Los Angeles Fire Department.

As of 7:30 a.m., the fire had burned more than 4,700 acres with no containment, Los Angeles Fire Department Chief Ralph Terrazas said. Authorities said the blaze was moving at a pace of about 800 acres an hour, meaning the inferno was likely to explode in size amid red flag fire conditions that included gusting Santa Ana winds and single-digit humidity.

Terrazas said at least 25 homes had been damaged, if not destroyed. One person, described only as a man in his 50s, died of a heart attack Friday morning. Terrazas said the man was talking to firefighters when he went into cardiac arrest. Media reports indicated the man was trying to protect his home in Porter Ranch from the flames. Fire officials said the man was taken to a hospital, where he was pronounced dead.

An evacuation warning is issued when a mandatory evacuation is anticipated. Residents in this area should be prepared to evacuate immediately, Stewart said.

Mandatory evacuations were also issued for the Oakridge Estates community north of the Foothill Freeway in Sylmar.

That prompted authorities to open a fourth evacuation center at Northridge Recreation Center, 18300 Lemarsh St., but that center was filled by late morning. A fifth shelter was later added at Lanark Recreation Center, 21816 Lanark St. in Canoga Park.

Large animals can be taken to the Hansen Dam Recreation Area at 11770 Foothill Blvd. in Lake View Terrace, Pierce College at 6201 Winnetka Ave. in Woodland Hills or the West Valley Animal Shelter at 20655 Plummer St. in Chatsworth, Stewart said. Pierce College officials said they had received about 80 horses as of Friday morning.

About 330 juveniles and staff from the Barry J. Nidorf Juvenile Hall at 16350 Filbert St. in Sylmar were evacuated Friday morning, ABC7 reported. The Sylmar Juvenile Courthouse at the same location was also closed. Court officials said all cases on calendar Friday would be continued, except those with "statutory deadlines," which were being heard at the Eastlake Juvenile Courthouse, 1601 Eastlake Ave., Los Angeles.

Authorities urged residents to heed evacuation warnings for their own safety.

"When you're told to leave, we mean for you to leave," Los Angeles Police Department Chief Michel Moore said Friday morning. "It's for your safety, it will save your life. If you stay in those areas we cannot guarantee you that we'll be able to find you if you're overcome by flames."

Roughly 1,000 firefighters from LAFD, Los Angeles County Fire Department and Angeles National Forest were on the ground battling the flames and eight water-dropping helicopters were deployed. Fixed-wing air tankers were also being sent to the fire.

The Los Angeles Department of Water & Power reported overnight that about 2,500 customers had lost power in the Granada Hills and Sylmar areas. The utility noted that much of the power to Porter Ranch is provided through underground lines, but there had been damage to two overhead circuits and 16 power poles. As of about 8 a.m., DWP reported that 870 customers were without power.

The utility had cut power to some overhead power lines Thursday night to assist with the firefighting efforts. The placement of the power lines in the area added to the hazards facing helicopter pilots trying to drop water on the flames.

The LAPD issued a citywide tactical alert Thursday night in response to the fire. It allows the department to keep officers beyond the end of their shifts.

"(We) are working with LAFD to carry out any necessary evacuations," the LAPD tweeted. "If you live in the area of the 210 freeway and Yarnell (Street) in Sylmar, we urge you to be prepared & follow all public safety instructions."

Moore said that because of the tactical alert "we're stretched thin."

LAPD Mission Division officers were clearing traffic in Sylmar due to the fire.

"Please steer clear away from the area of westbound Foothill (Boulevard) to Roxford (Street)," the Mission Division tweeted. "Avoid the 210 freeway as well. Thank you."

The flames also created a traffic nightmare, with all freeways from the north into the Porter Ranch area blocked. Closures that had been implemented on the Ronald Reagan (118) Freeway were lifted by late morning. By about midday, closures were affecting:

-- eastbound 118 Freeway connector to the northbound 405 Freeway; and

The Los Angeles Unified School District canceled classes at virtually all campuses in the area, and all schools in the Castaic Unified and Newhall school districts were shuttered. Cal State Northridge was closed, along with Los Angeles Pierce College, Los Angeles Mission College and Los Angeles Valley College.

There was no immediate word on what sparked the blaze. Terrazas noted that city officials had been working with the Los Angeles Homeless Services Authority to clear homeless people out of fire-prone areas during the red-flag conditions that began Thursday, but he said he did not know if there were any encampments near the flashpoint of the blaze.