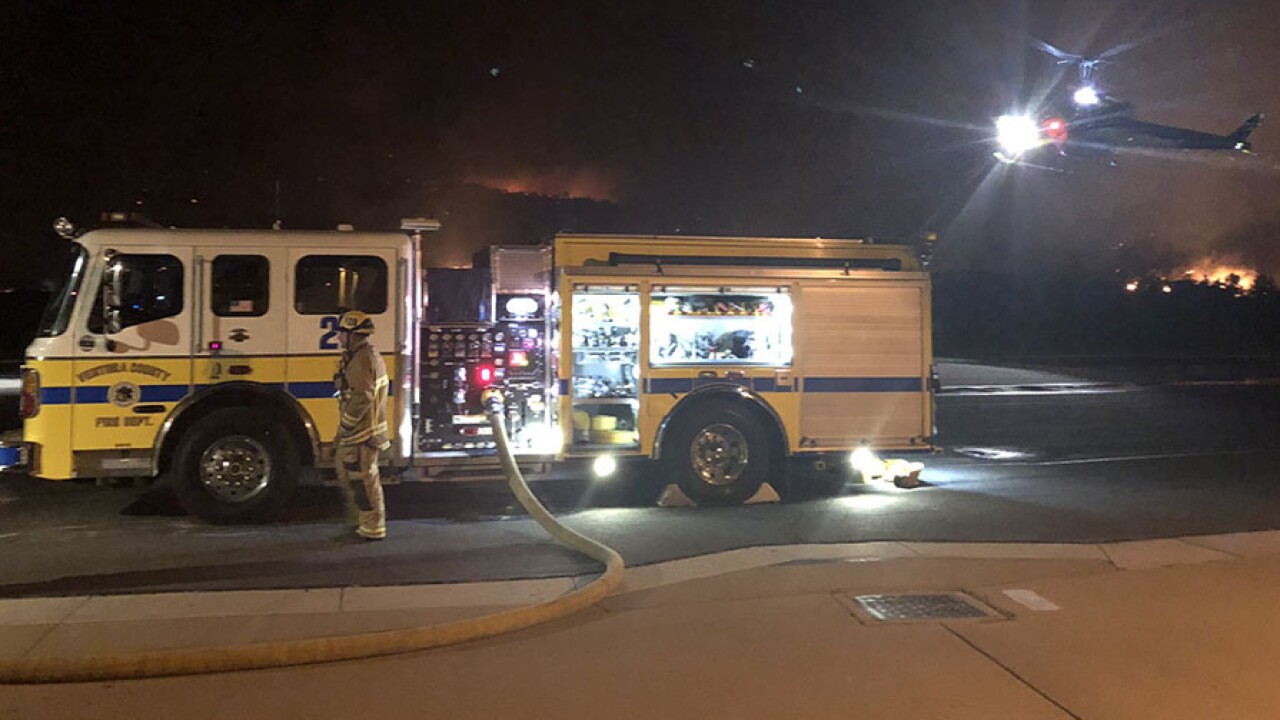 The blaze dubbed the Maria Fire erupted late Thursday northwest of Los Angeles during what had been expected to be the tail end of a siege of Santa Ana winds that fanned destructively across the region, but a tug-of-war developed between those offshore gusts and the return of some onshore flow from the ocean.

"It has been an uphill battle ever since," Ventura County Fire Chief Mark Lorenzen told a midday news conference. "We are finding that the winds are starting to change and that presents its own challenges all by itself."


The fire burned down the sides of a mountain bordered by agricultural land, the small city of Santa Paula and other communities as it grew to about 14 square miles (36 square kilometers). Airplanes tried to flank it with long drops of retardant while helicopters dropped loads of water.

Some 8,000 people were under evacuation orders and 2,300 structures were threatened, Sheriff Bill Ayub said.

Red Flag warnings for gusts and very low humidity levels had been expected to expire Friday evening but forecasters extended them to 6 p.m. Saturday for valleys and interior mountains of Ventura and Los Angeles counties, citing the withering conditions.

"As recent fire activity has shown, this remains a dangerous environment for fire growth, even with weaker winds than earlier this week," the National Weather Service wrote.

Elsewhere, the state was free of fire weather warnings and only a few hundred utility customers were awaiting restoration of power that was shut off to wide areas in an attempt to prevent blazes involving electrical equipment and strong winds.

In Northern California, more people were allowed to return to areas evacuated due to the huge Kincade Fire burning for days in the Sonoma County wine country.

The 121-square-mile (313-square-kilometer) fire was 67% contained, the California Department of Forestry and Fire Protection said.

The tally of destroyed homes reached 167 and there were 33 more damaged, Cal Fire said. Many other structures also burned.

But the Contra Costa County Fire Protection District pegged the utility's equipment as the cause of three smaller fires that cropped up Sunday in the San Francisco Bay Area suburbs of Martinez and Lafayette.

And while the cause of the Kincade Fire hasn't been determined, PG&E reported a problem with a transmission tower near the spot where the fire started.

Utility spokesperson Ari Vanrenen said Friday they are "cooperating with the investigations into the recent fires and will continue to respond to requests for documents and other information related to those investigations."

In Los Angeles, the last remaining evacuations were lifted in Brentwood, where a fire that erupted near The Getty Center arts complex roared into ridgetop and canyon neighborhoods and destroyed eight expensive homes.

In eastern Ventura County, the Ronald Reagan Presidential Library reopened to the public after being forced to shut down Wednesday as a wind-driven wildfire swirled around the hilltop facility.

Updated information on the Maria Fire can be found at vcemergency.com.