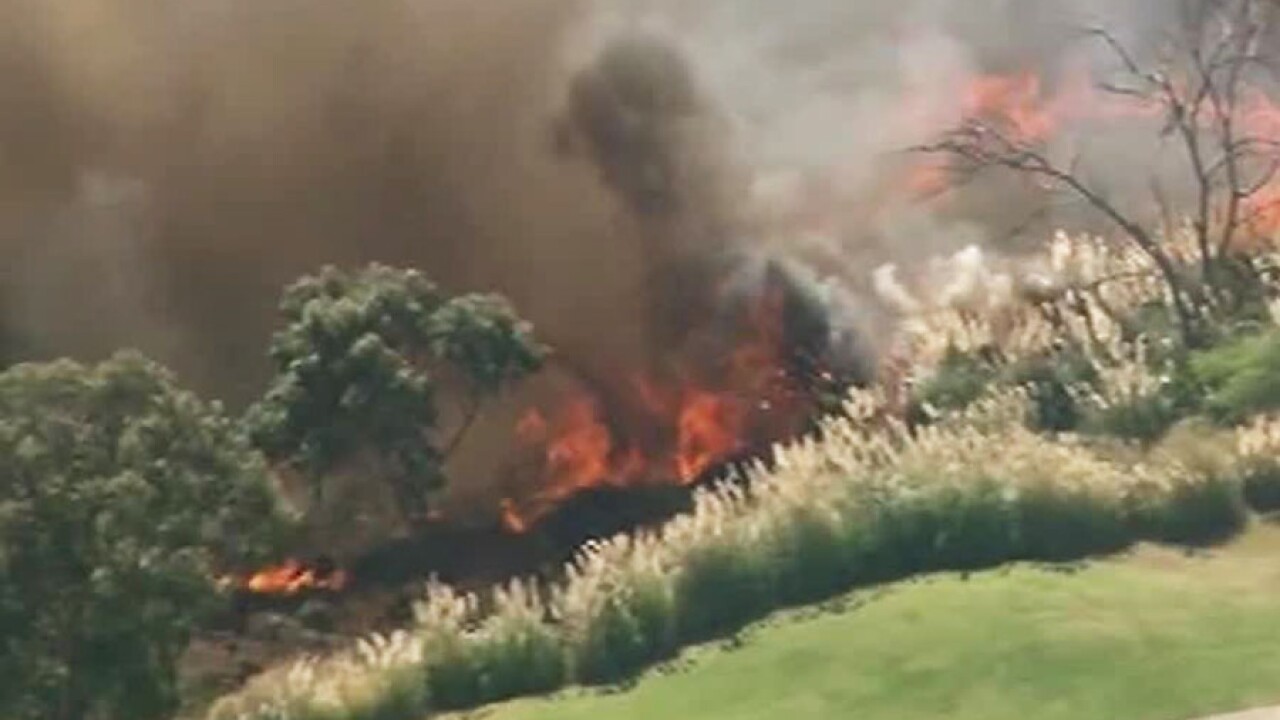 At 5 p.m., mandatory evacuation orders and warnings were lifted in all areas with the exception of an area bordered by Kenter Ave., Sunset Blvd., Mountain Gate Ave., and a section near Sepulveda Blvd. and the 405 freeway.

As of Wednesday evening, the fire was listed at 745 acres, with 27% containment.

But forecasters said the area could be blasted with winds ranging from 30 to 50 mph, along with occasional gusts of up to 70 mph.

``Adverse weather conditions will be the biggest challenge for firefighters,'' according to the Los Angeles Fire Department. ``In anticipation of the extreme Santa Ana wind event, the LAFD has recalled and staffed additional resources for any emergency that may arise over the next 24 hours. These resources will be strategically placed in key locations that have a history of being prone to wildfire.''

The National Weather Service issued what it deemed an ``extreme red flag warning,'' which went into effect at 11 p.m. Tuesday, amid predictions some mountain areas could be blasted with gusts of up to 80 mph. The warning covers the bulk of Los Angeles County and will remain in effect until 6 p.m. Thursday.

``The peak of the event is expected to be Wednesday when damaging wind gusts between 50 and 70 mph will be likely for the wind-prone areas of Los Angeles and Ventura counties, with isolated gusts to 80 mph in the mountains,'' according to the weather service.

``This Santa Ana wind event will likely be the strongest we have seen so far this season. These strong winds combined with a long duration of single- digit humidities and dry fuels will likely bring very critical fire weather conditions, making this an extreme red flag warning event.''

As of Wednesday, the Getty Fire, which broke out around 1:30 a.m. Monday morning alongside the San Diego (405) freeway near Getty Center Drive, had destroyed 12 homes and damaged five others. One firefighter sustained a minor injury. About 760 firefighters were battling the blaze.

Despite the attention focused on the Getty Fire, the Los Angeles Fire Department dispatched three strike teams to Ventura County Wednesday morning to help fight the Easy Fire that erupted in Simi Valley, forcing evacuations and threatening the Ronald Reagan Presidential Library and Museum. The agency also sent crews to help knock down a small brush fire in Calabasas.

Locally, however, attention was focused on the Getty Fire. LAFD Chief Ralph Terrazas noted Tuesday that it would take ``one ember, just one ember downwind, to start another brush fire.''

At the fire's height, evacuation orders were issued affecting 10,000 structures, both residential and commercial, in an area between the 405 Freeway and Temescal Canyon Road, from Sunset Boulevard north to Mulholland Drive. Evacuation orders were lifted Monday night for the Mountaingate community south of Mulholland.

Authorities confirmed Tuesday afternoon the Getty Fire was caused by gusting winds that severed a tree branch and blew it into a Department of Water and Power electrical line, causing sparks that fell onto the brush below.

Marty Adams, general manager of the Department of Water & Power, told reporters the agency had just completed a brush-clearing operation in the area in July, trimming 248 trees ``in excess of what the state requires.'' He noted that the branch in question came from a tree ``outside of our clearance zone'' but was carried by the wind into the power line.

Adams said the power line itself remained intact and is still delivering electricity to the area.

The San Diego Freeway, a southbound stretch of which was closed for much of the day Monday, was open through the Sepulveda Pass, but exit ramps between the Ventura (101) Freeway in Sherman Oaks to Sunset Boulevard were blocked.

The Getty Center museum was not believed to be in immediate danger from the flames. Officials there said Getty Center and the Getty Villa in Pacific Palisades would be closed through Friday to ensure fire crews had adequate access to the area to fight the flames.