The Getty and Kincade fires have destroyed homes.

LOS ANGELES (CNS) - Driven by gusting winds and dry terrain, a brush fire swept through canyons and hillsides on the western side of the Sepulveda Pass Monday, destroying at least eight homes, forcing evacuations of thousands of residents and closing part of the heavily traveled San Diego (405) Freeway.

There were no immediate reports of any injuries. As of Monday afternoon, roughly 1,100 firefighters were assigned to the blaze, assisted by water-dropping aircraft.

Dubbed the Getty Fire, the blaze was reported shortly after 1:30 a.m. by a witness who called the California Highway Patrol and reported seeing flames on a hillside close to the 405 Freeway near Getty Center Drive, along with a possible power line on fire, according to the CHP. 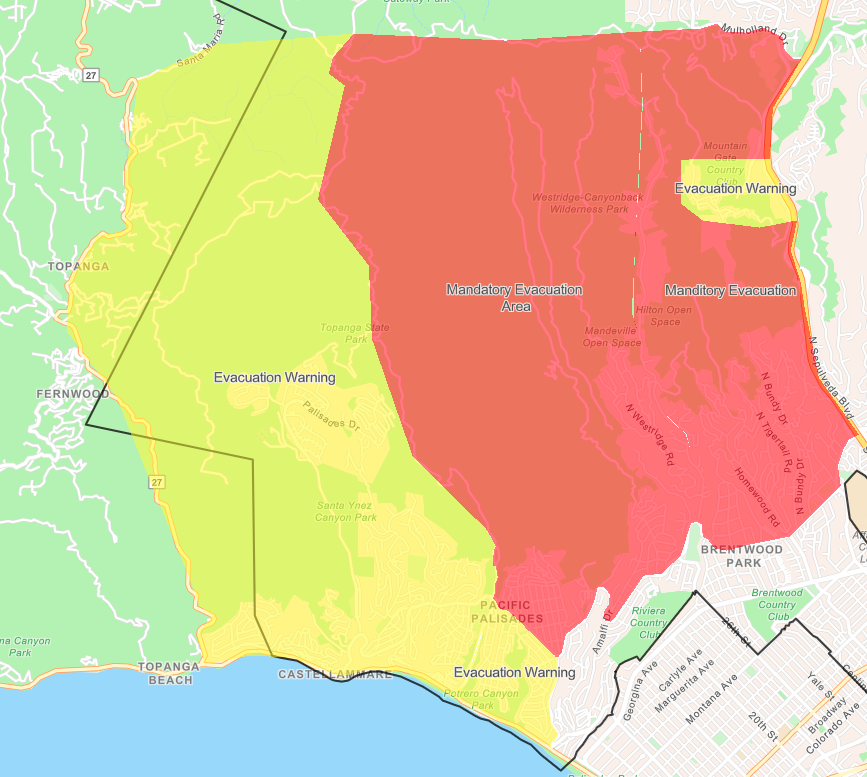 Initially reported at about three or four acres, the blaze quickly fed on dry brush to expand to about 40 acres. By 8 a.m., the flames had chewed through an estimated 500 acres, threatening some of the Southland's ritziest neighborhoods. The fire grew to 618 acres by midday.

By late afternoon, the fire was just 5 percent contained.

The flames burned amid red flag fire conditions. According to the National Weather Service, winds were expected to gust between 35 and 50 mph.

Authorities said eight structures were believed to have been destroyed, and at least six others damaged.

An area south of Sunset to Pacific Coast Highway was briefly ordered evacuated, but those orders were downgraded to an evacuation warning by midday.

Residents in the area between Temescal Canyon Road and Topanga Canyon, from Sunset to Mulholland, were also told to be prepared to evacuate if necessary.

Late Monday afternoon, evacuation orders were lifted for the Mountaingate community just south of Mulholland Drive, but Los Angeles Mayor Eric Garcetti said all other evacuees should anticipate being out of their homes for at least two days. He said authorities don't want to lift evacuations prematurely, only to order people back out if winds kick up again overnight or Tuesday afternoon.

The LAFD also ordered students to evacuate from Mount Saint Mary's University at 12001 Chalon Road. Evacuations were also ordered for 200 people in a care facility next door.

According to the fire department, the Palisades and Westwood centers will remain open overnight, but the others will close at 8 p.m.

The Getty Center museum was not believed to be in danger from the flames. Officials there said Getty Center and the Getty Villa in Pacific Palisades would be closed Tuesday to ensure fire crews had adequate access to the area to fight the flames.

The CHP urged motorists to avoid the 405 Freeway, the southbound side of which was closed at about 8 a.m. between the Ventura (101) Freeway in Sherman Oaks to Sunset Boulevard. That stretch was reopened Monday evening, but all of the exit ramps will remain blocked.

There was no immediate word on what sparked the blaze, although Garcetti said that while the cause remains under investigation, the fire was not the result of a homeless encampment or any activity by homeless people in the area.

``We do know that ... there was no homeless encampment and so that has been, again, ruled out. That's not what started this,'' Garcetti said.

The mayor said investigators were ``making good progress'' in determining the cause.

Around mid-morning, LAFD arson investigators were spotted with Department of Water and Power crews inspecting a power pole along Sepulveda Boulevard in the general area where the blaze started. LAFD Chief Ralph Terrazas confirmed that crews have identified the fire's point of origin just off the 405 Freeway near Sepulveda Boulevard.

Garcetti said arson investigators did find a downed power pole in the area, but they determined it had burned at its base, but the attached lines were intact, ``so they have absolutely no evidence on that line that that was the cause.''

Authorities drove through neighborhood streets early Monday with flashing lights ordering residents to leave. Among those evacuated was Lakers star LeBron James, who said on Twitter: ``Had to emergency evacuate my house and I've been driving around with my family trying to get rooms. No luck so far!'' He later tweeted that he had found accommodations.

Actor and former Gov. Arnold Schwarzenegger also wrote on Twitter that he was evacuated at around 3:30 a.m. Due to the fire, Monday night's Hollywood red-carpet premiere of his latest movie, ``Terminator: Dark Fate,'' was canceled.

My best wishes as well to the first responders⛑ right now doing what they do best! 🙏🏾💪🏾

Man these LA 🔥 aren’t no joke. Had to emergency evacuate my house and I’ve been driving around with my family trying to get rooms. No luck so far! 🤦🏾‍♂️

We evacuated safely at 3:30 this morning. If you are in an evacuation zone, don’t screw around. Get out. Right now I am grateful for the best firefighters in the world, the true action heroes who charge into the danger to protect their fellow Californians. #GettyFire

In Sacramento, Gov. Gavin Newsom announced that the state has secured a Fire Management Assistance Grant from the Federal Emergency Management Agency to help ensure the availability of resources to fight the Getty Fire.

``California is grateful for the ongoing support as we battle fires up and down the state in extremely severe weather conditions," said Newsom.

``I thank our heroic emergency responders and volunteers for their tireless, life-saving work to safeguard communities across the state."

The Fire Management Assistance Grant will assist local, state and tribal agencies responding to the fire to apply for 75 percent reimbursement of their eligible fire suppression costs.

Newsom has declared a statewide emergency due to the dangerous weather conditions, which have resulted in fires and evacuations across the state. The governor has also secured Fire Management Assistance Grants to help ensure the availability of resources to fight the Kincade and Tick fires, for which he previously declared a state of emergency in Sonoma and Los Angeles counties.

After a short reprieve overnight and part of Tuesday, another red flag warning will take effect at 11 p.m. Tuesday and remain in effect until 6 p.m. Thursday for much of Los Angeles County, with forecasters saying those anticipated winds could be even more severe than those gusting Monday.

``The peak of the event is expected to be Wednesday when damaging wind gusts between 50 and 70 mph will be likely for the wind prone areas of Los Angeles and Ventura counties, with isolated gusts to 80 mph in the mountains,'' according to the NWS. ``This Santa Ana wind event will likely be the strongest we have seen so far this season. These strong winds combined with a long duration of single-digit humidities and dry fuels will likely bring very critical fire weather conditions, making this an extreme red flag warning event.''