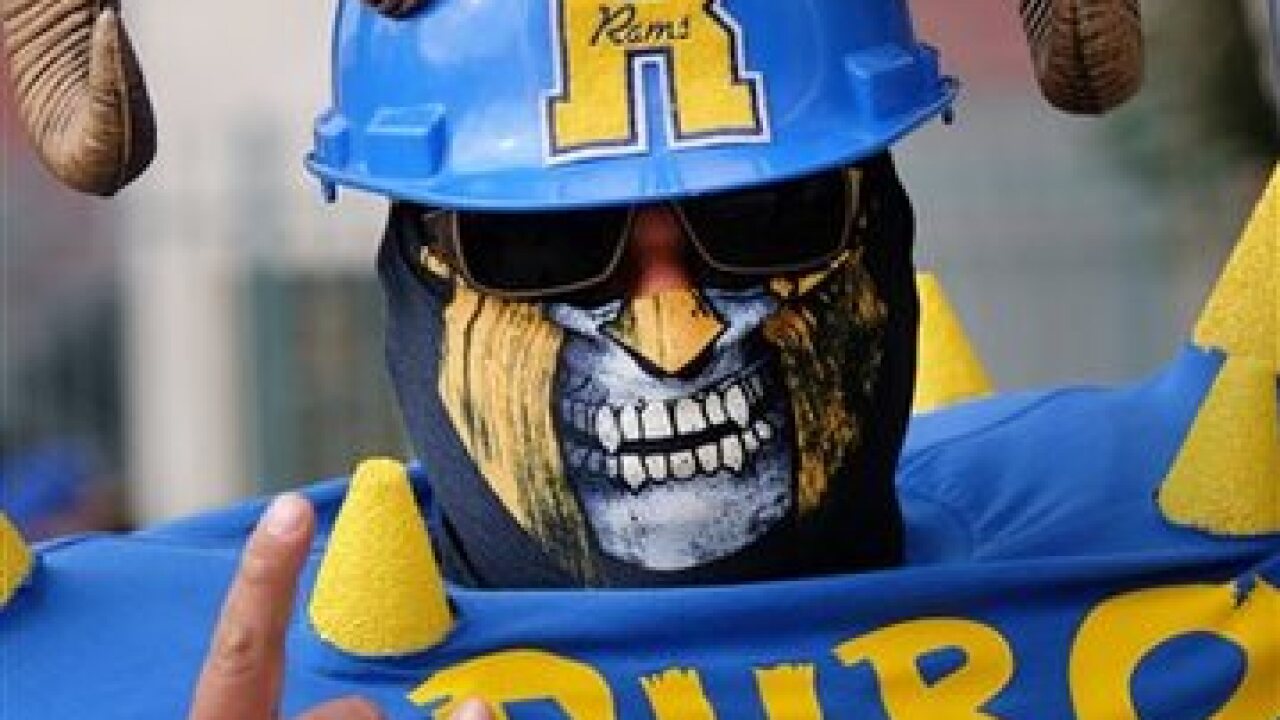 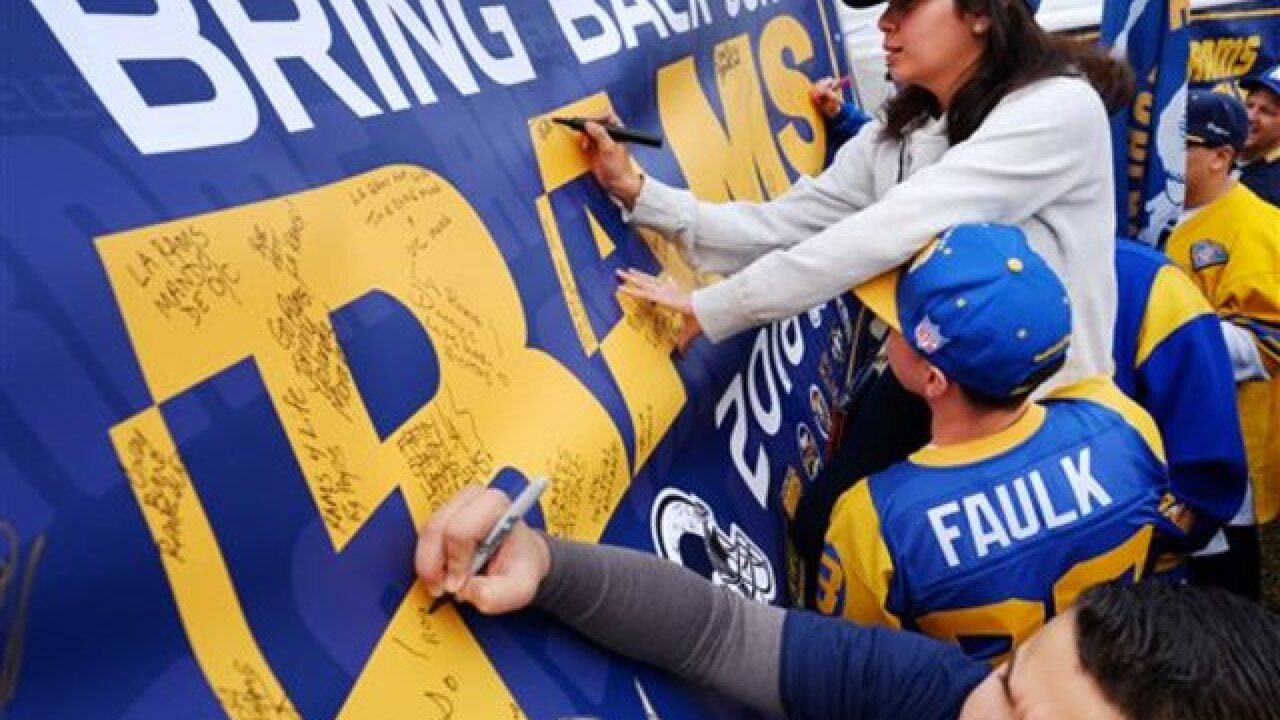 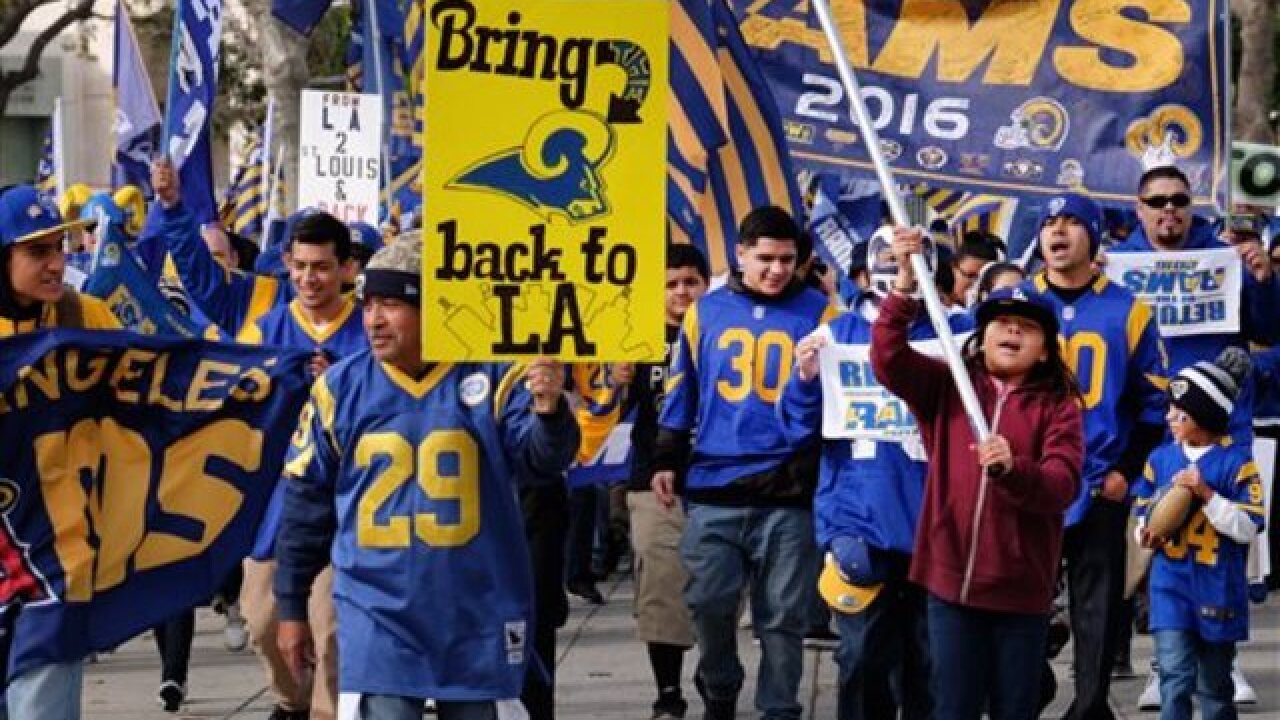 10News Sports Director Ben Higgins will be in Houston for the NFL meetings -- look for his live updates online and live reports in our newscasts, starting at 11 p.m. tonight. TV LISTINGS

LOS ANGELES -- The NFL has never been closer to ending its 21-year absence from the city that staged the first Super Bowl and supported several teams in several leagues through several decades of professional football.
Those teams all once played at the Los Angeles Memorial Coliseum, which could see the sport back on its 93-year-old field in August.
Several hundred Rams fans — and a few Raiders and Chargers fans, too — gathered outside the venerable stadium last weekend under slate-gray skies that made for perfect football weather. They threw a pigskin, chanted slogans and looked forward to relief from a two-decade drought.
"We really can't believe it's almost time for this to end," lifelong Rams fan Ray Ochoa said. "It's time. We just want football."
The NFL's owners are expected to decide this week whether any combination of the Rams, Chargers and Raiders will be allowed to move to Los Angeles, finally filling the gaping hole in the sports landscape of the nation's second-largest media market.
But mere days before the meetings in Houston could end a two-decade discussion, nobody is certain what course the owners will choose.
Virtually any combinations of those three teams and two stadium proposals are still possibilities. There are ardent backers for both the Rams' plan for a Hollywood Park stadium and the Chargers' hopes to build a Carson arena to share with the Raiders.
All three teams have history and fan support in the city, and the franchises are eager to capitalize on the theoretically boundless wealth and attention to be found under Hollywood's bright lights.
The owners will consider financial rewards and personal friendships when they make their decision among the three contenders, but it's unclear whether the ability to capture the heart of those L.A. fans will play any role.
If those owners saw the gathering at the Coliseum, they would know the Rams never lost the fan base they abandoned when the late Georgia Frontiere moved her team to St. Louis after the 1994 season, leaving behind 49 years of steadfast support.
"There are many fans who have been waiting and loyal, and they still follow the Rams in St. Louis," said Randy Troy, a longtime fan aligned with the Bring Back the Los Angeles Rams supporters' group.
"Other fans like me follow college football and don't care about the NFL," Troy added. "But when I have the Los Angeles Rams, I care again. There are so many football fans in Los Angeles. The NFL is No. 1. What do you think will happen when the L.A. Rams return here? It's going to blow up."
There's no definite way to tell which team has the most fan support in Los Angeles, but the two that moved after the 1994 season both have strong cases. Most observers think the Chargers are in third place in the race for L.A. fans' hearts and minds even though they're technically the only team born here: Barron Hilton's AFL team played its inaugural season at the Coliseum before relocating to San Diego.
The Rams rather hilariously cited a Twitter poll conducted by an ESPN.com writer as proof of their predominance while arguing for relocation, but their colors still show up regularly at local sporting events.
Anybody who visits a local airport on the morning of a Raiders home game in Oakland will see hundreds of black-clad faithful piling onto one-hour flights to the Bay Area. The outlaw franchise has strong support in every corner of California, which also makes them the least likely to be hurt by missing out on a Los Angeles move.
In truth, fan support for pro football teams is just as spread-out and variegated as the five-county greater Los Angeles area.
Nearly every NFL franchise has support among the roughly 19 million people who have had no home team to cheer for two decades. The Southland is stacked with bars and fan clubs dedicated to multiple franchises — for instance, the Steelers fans at Hollywood's Blue Palms Brewhouse, or the Bills fans who pack Busby's West in Santa Monica.
And it's clear what a Los Angeles move could mean to the brands of the Rams and Chargers, who both have almost no national following. In the most recent Harris poll asking Americans to name their favorite NFL team, the Chargers and Rams tied for 30th place among the 32 franchises.
The Chargers claim they draw 25 percent of their fan base from the Los Angeles area, although San Diegans laugh and wonder about their math. They clearly have a strong core of fan support in Orange County and the Inland Empire, while most football-loving Angelenos also are familiar with Philip Rivers, Antonio Gates and their mates through the Chargers' weekly presence on L.A. television broadcasts, since they're considered the area's de facto home team by the networks.
"But if you tried to do this rally for the Chargers, a dozen people may show up," Troy said at the Coliseum. "The Rams have thousands. The Raiders could be viable in L.A. as well."
Associated Press 2016