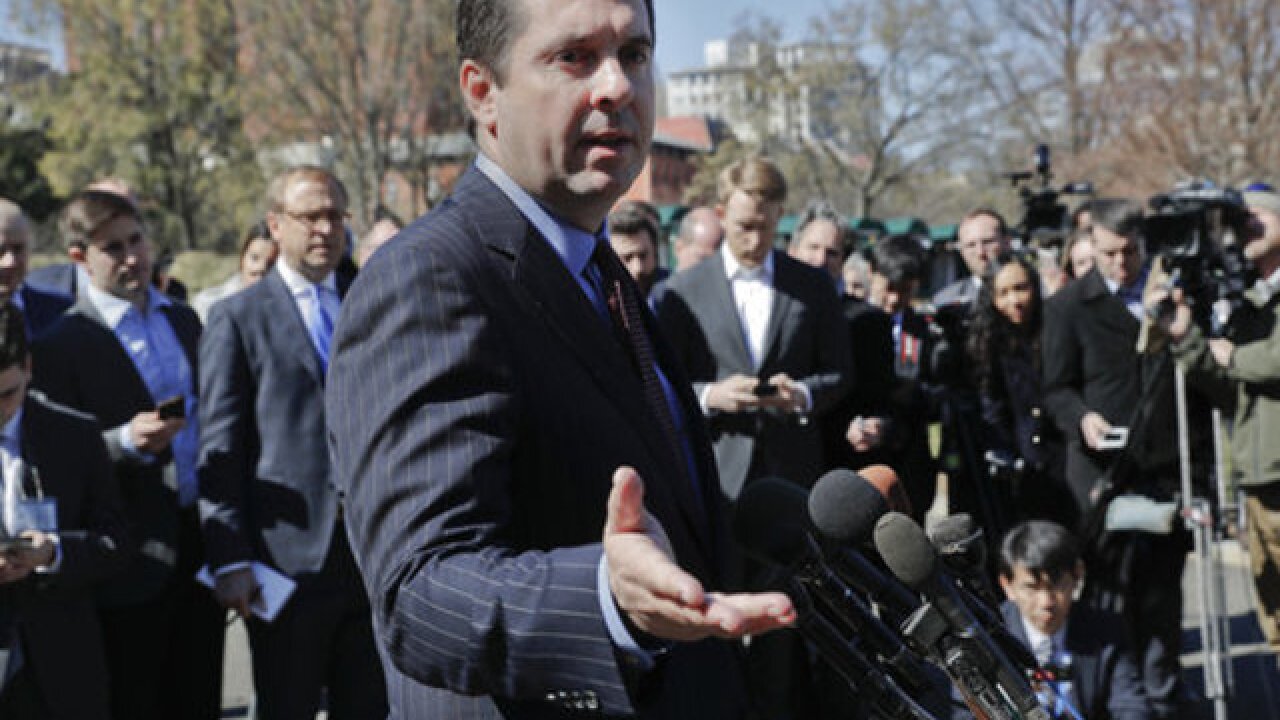 The meeting occurred before Nunes disclosed at a news conference that U.S. spy agencies may have inadvertently captured Trump and his associates in routine targeting of foreigners' communications.

"Chairman Nunes met with his source at the White House grounds in order to have proximity to a secure location where he could view the information provided by the source," Nunes spokesman Jack Langer said.

Previously, Nunes, R-Calif., would not say where he met his secret source. He has still not revealed who it might be.

Nunes' connection to the White House has raised concerns that his committee's investigation is not a bipartisan, independent probe. He was a member of Trump's presidential transition team, as well.

The Senate intelligence committee is also conducting an investigation into Russia's interference in the election and possible ties with the Trump campaign.

On Monday, the White House confirmed that Trump's son-in-law, Jared Kushner, has volunteered to be interviewed by the Senate committee about arranging meetings with the Russian ambassador and other officials. Kushner is the fourth Trump associate to offer to be interviewed by the congressional committees looking into the murky Russia ties. Trump's former campaign chairman, Paul Manafort, Trump adviser Carter Page and Trump associate Roger Stone last week volunteered to speak as well.

Manafort, Page and Stone's announcements last week that they would be interviewed came amid Nunes' disclosures about the new intelligence he had seen.

The White House was asked repeatedly last week about whether it was the source of Nunes' information.

"I don't know why he was coming up to brief the president on something that we gave him," Spicer told reporters, adding: "It doesn't really seem to make a ton of sense."

Nunes' office said the information provided to the chairman came from "executive branch documents that have not been provided to Congress."

The House intelligence committee has a facility where classified information can be viewed and discussed, but Nunes' spokesman said the circumstances required that Nunes go to the White House grounds.

"Because of classification rules, the source could not simply put the documents in a backpack and walk them over to the House Intelligence Committee space," Langer said. "The White House grounds was the best location to safeguard the proper chain of custody and classification of these documents, so the chairman could view them in a legal way."

The bizarre disclosure about the intelligence reports brought criticism from Democrats, especially those who sit on his committee and are working with him on an investigation into Russia's interference in the 2016 election. That investigation is also looking into possible ties between Trump associates and the Kremlin. Nunes said the intelligence reports were not related to Russia.

"The chairman is extremely concerned by the possible improper unmasking of names of U.S. citizens, and he began looking into this issue even before President Trump tweeted his assertion that Trump Tower had been wiretapped," Langer said.

The top Democrat on the House intelligence committee, Rep. Adam Schiff of California, said Nunes' meeting with his source appeared to have been "a dead-of-night excursion."

On Sunday, Schiff said on CBS' "Face the Nation," ''I think the chairman has to make a decision whether to act as a surrogate of the White House — as he did during the campaign and the transition — or to lead an independent and credible investigation."

Nunes' office did not immediately say what time the chairman met his source on White House grounds.