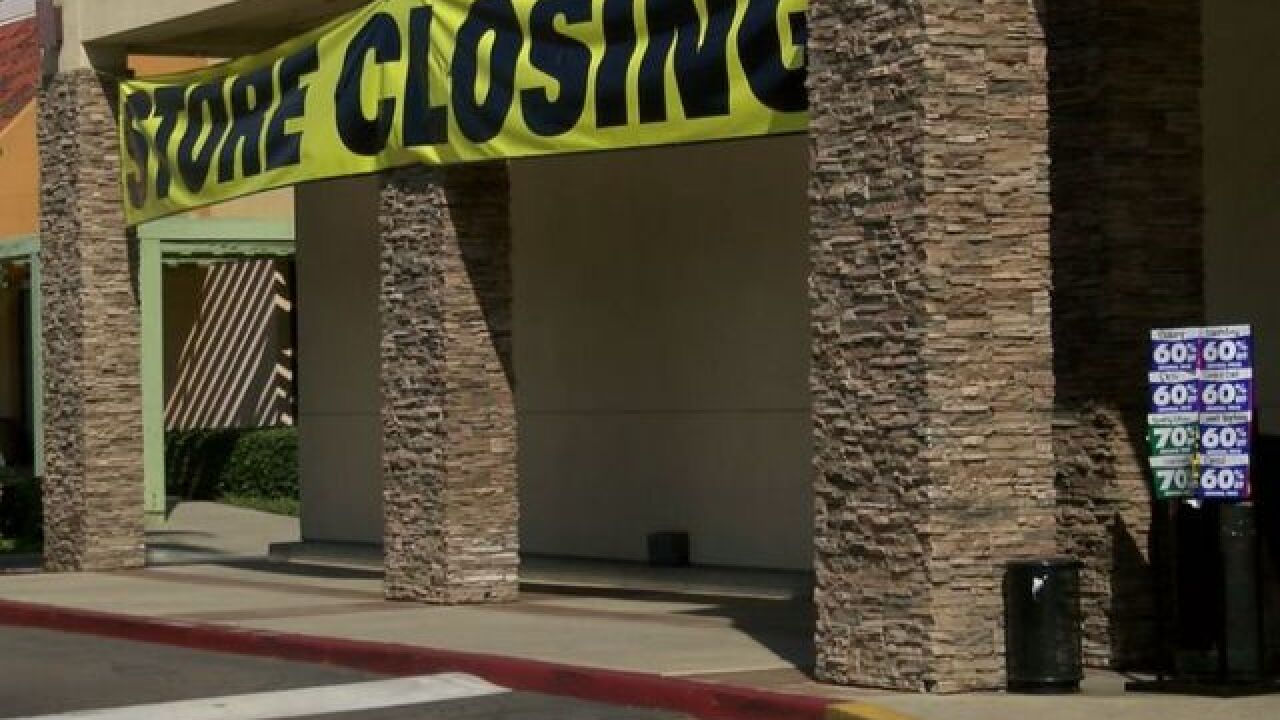 SAN DIEGO -- Haggen -- the embattled grocery chain that is closing up shop in California, Nevada and Arizona -- announced Friday that layoffs would begin just before Thanksgiving.

More than 3,400 Haggen employees across the board will be laid off between Nov. 24 and Dec. 8. LAYOFF NOTICE (pdf)

By my best calculations, about 970 San Diego employees will be laid off from #haggen by Dec. 8.

All may not be lost, however -- late Friday the Federal Trade Commission approved an agreement that would allow Albertsons and Safeway, Inc. to rehire Haggen employees. The FTC issued the following news release outlining its decision:

The Federal Trade Commission has approved an application by Albertsons to modify its contract with Haggen Holdings, LLC, under an order that required Albertsons to sell supermarkets in Arizona, California, Nevada, Oregon, and Washington to Haggen.

The order settled charges that Albertsons’ acquisition of Safeway Inc. was likely to lessen supermarket competition in 130 local markets. As part of a contract negotiated between Albertsons and Haggen, the parties agreed to certain restrictions on Albertsons’ ability, after the divestiture, to solicit and hire employees of stores Albertsons had transferred to Haggen.

In light of Haggen’s announced store closings and pending bankruptcy, the parties now seek to modify that contract. According to the application, the modification will allow Albertsons to re-hire former employees without incurring “the risk of being accused of violating” its contract with Haggen.

The Commission has approved this application on an expedited basis (and waived the 30-day public comment period) to help employees of the divested stores more quickly find alternative employment.

"We are pleased the FTC has approved our application, enabling us to rehire former Albertsons, Vons and Pavilions employees who may otherwise have lost their jobs or been economically disadvantaged as a result of Haggen's recently announced store closures. We will continue to work cooperatively with the unions representing these employees, and look forward to welcoming many of them back into the Albertsons, Vons and Pavilions family."

The company has 83 stores in California, including the following in San Diego County:

How are the closures impacting local communities?
10News Reporter Joe Little spent time in Chula Vista on Friday and learned that it's taking a huge hit on residents there.  Two of the stores are located on the city’s east side, right off Interstate 805.

“So this entire community is not going to have a good grocery store to go to,” said Chula Vista City Councilman John McCann, who added that the two stores combined probably service about 20,000 residents.
Councilman McCann said he planned to work with the city manager to contact other franchises to take over the vacant spots.
“When you have no grocery store in your community, you have to look at all the options,” he said.
McCann listed Ralph’s, Whole Foods, Trader Joe’s, and even Wal-Mart as possible replacement options.
The shelves at Haggen on Telegraph Canyon Road was stripped bare Thursday by shoppers taking advantage of store closing sales.

Are you celebrating the end of #Haggen or bitter? Thousands of @thinkchulavista are pretty bitter. @10News at 6. pic.twitter.com/nXym1QMhux

Haggen has engaged Sagent Advisors to market for sale some locations in the five states it operates and to explore market interest for various store locations, company officials said.

John Clougher, CEO of Haggen Pacific Northwest, said, "Haggen plans to continue to build its brand in partnership with its dedicated corporate support and store teams. Haggen has a long record of success in the Pacific Northwest and these identified stores will have the best prospect for ongoing excellence. Although this has been a difficult process and experience, we will remain concentrated in the Pacific Northwest where we began, focusing on fresh Northwest products and continuing our support and involvement in the communities we serve."

Haggen grew from an 18-store regional grocer to a 164-store chain through the purchase of Albertsons locations in December. The company sued Albertsons claiming it did not fulfill terms of the purchase agreement.

Editorial note: A previous version of this story stated that over 3,000 Haggen employees in California would be laid off. The number actually reflects the number of layoffs for the entire Haggen operations in several states.