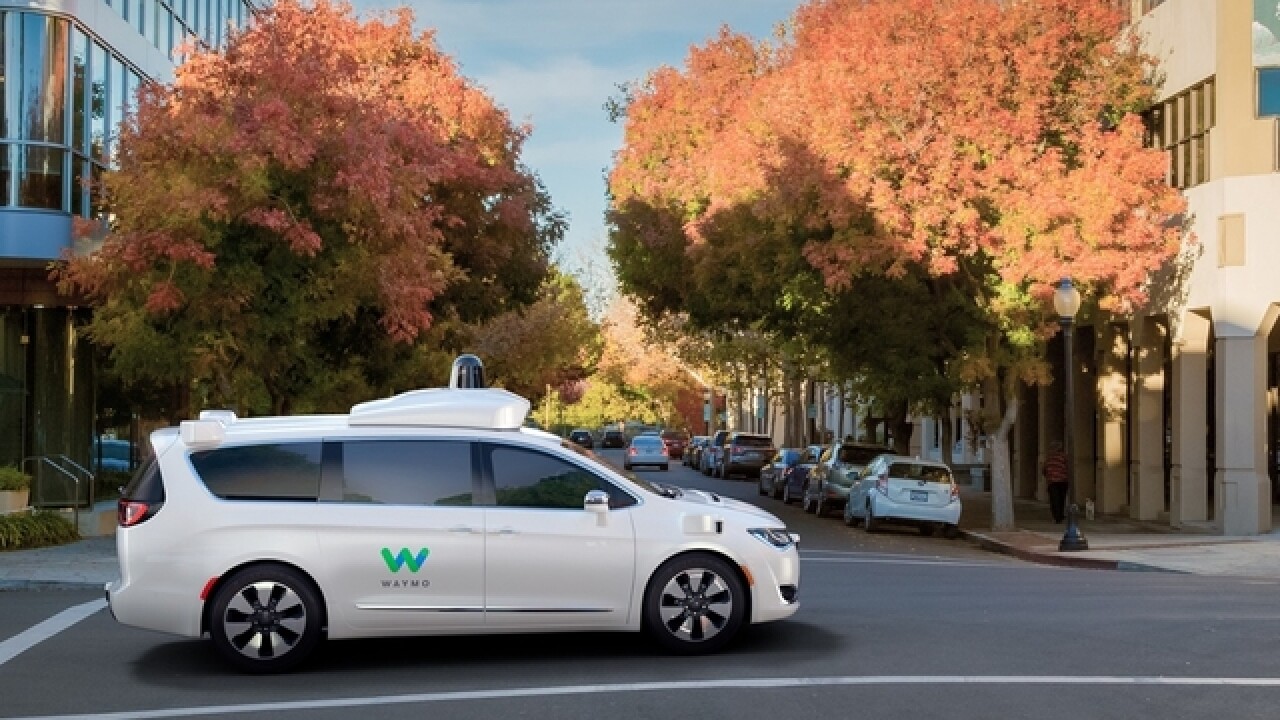 SAN FRANCISCO (AP) — The robotic car company created by Google is poised to attempt a major technological leap in California, where its vehicles will hit the roads without a human on hand to take control in emergencies.

The  regulatory approval  announced Tuesday allows Waymo's driverless cars to cruise through California at speeds up to 65 miles per hour.

The self-driving cars have traveled millions of miles on the state's roads since Waymo began as a secretive project within Google nearly a decade ago. But a backup driver had been required to be behind the wheel until new regulations in April set the stage for the transition to true autonomy.

RELATED: 2018 could be a pivotal year for driverless cars

Waymo is the first among dozens of companies testing self-driving cars in California to persuade state regulators its technology is safe enough to permit them on the roads without a safety driver in them. An engineer still must monitor the fully autonomous cars from a remote location and be able to steer and stop the vehicles if something goes wrong.

California, however, won't be the first state to have Waymo's fully autonomous cars on its streets. Waymo has been giving rides to a group of volunteer passengers in Arizona in driverless cars since last year. It has pledged to deploy its fleet of fully autonomous vans in Arizona in a ride-hailing service open to all comers in the Phoenix area by the end of this year.

But California has a much larger population and far more congestion than Arizona, making it even more challenging place for robotic cars to get around.

Waymo is moving into its next phase in California cautiously. To start, the fully autonomous cars will only give rides to Waymo's employees and confine their routes to roads in its home town of Mountain View, California, and four neighboring Silicon Valley cities — Sunnyvale, Los Altos, Los Altos Hills, and Palo Alto.

If all goes well, Waymo will then seek volunteers who want to be transported in fully autonomous vehicles, similar to  its early rider program in Arizona  . That then could lead to a ride-hailing service like the one Waymo envisions in Arizona.

But Waymo's critics are not convinced there is enough evidence that the fully autonomous cars can be trusted to be driving through neighborhoods without humans behind the wheel.

"This will allow Waymo to test its robotic cars using people as human guinea pigs," said John Simpson, privacy and technology project director for Consumer Watchdog, a group that has repeatedly raised doubts about the safety of self-driving cars.

Those concerns escalated  in March after fatal collision involving a self-driving car  being tested by the leading ride-hailing service, Uber. In that incident, an Uber self-driving car with a human safety driver struck and killed a pedestrian crossing a darkened street in a Phoenix suburb.

Waymo's cars with safety drivers have been involved in dozens of accidents in California, but those have mostly been minor fender benders at low speeds.

All told, Waymo says its self-driving cars have collectively logged more than 10 million miles in 25 cities in a handful of states while in autonomous mode, although most of those trips have occurred with safety drivers.

Waymo contends its robotic vehicles will save lives because so many crashes are caused by human motorists who are intoxicated, distracted or just bad drivers.

"If a Waymo vehicle comes across a situation it doesn't understand, it does what any good driver would do: comes to a safe stop until it does understand how to proceed," the company said Tuesday.