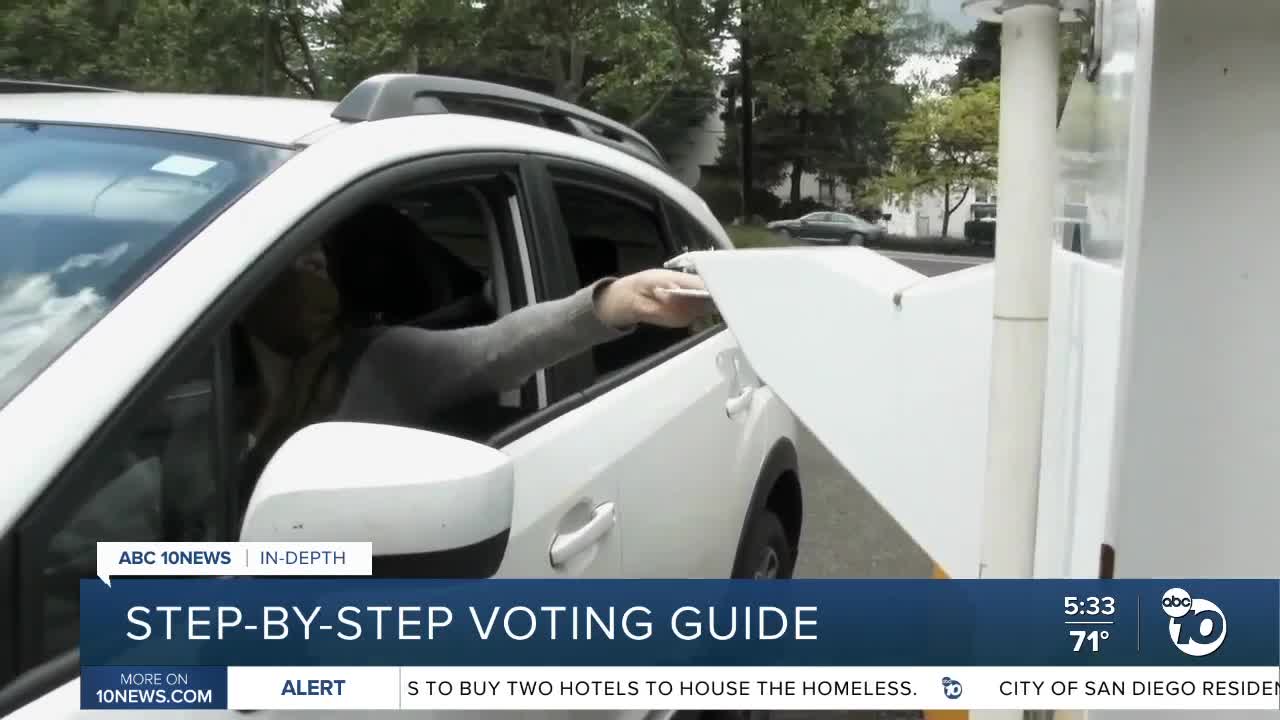 In the March primary election, election officials in California had to disqualify 102,428 mail-in ballots, or about 1.5 percent. Here's how to make sure your vote gets counted. SAN DIEGO (KGTV) — In the March primary election, election officials in California had to disqualify 102,428 mail-in ballots, or about 1.5 percent.

So how do you ensure your vote gets counted?

The very first step is to make sure you are registered to vote. Voters in San Diego County can do so at sdvote.com. Californians in other counties should visit vote.ca.gov.

The deadline to register is October 19.

The second thing you want to do is make a plan for how you will vote, either by mail or in-person.

“Our recommendation, particularly with the pandemic, is to vote by mail in this upcoming election,” said San Diego County Registrar of Voters Michael Vu.

Because of the pandemic, election officials are sending mail-in ballots to every active, registered voter in California for the first time in state history. As long as you’re registered by October 19, you’ll get one, Vu said.

When you’re making your selections, “clearly mark that ballot, similar to when you’re going to a polling place with an ink pen. Black or blue is preferred,” Vu said.

Once filled out, seal the ballot in the pre-paid return envelope and sign the back. Seriously. Don’t forget.

Missing or mismatched signatures, meaning the signature on the ballot doesn’t match the one on file, are the second most common reason mail ballots get disqualified.

The number one reason is that they’re sent back too late. Ballots must be postmarked on or before Election Day, November 3.

“Fill it out at your leisure. But send it back with plenty of time just to make sure that it's postmarked on or before Election Day in order to count,” said California Secretary of State Alex Padilla.

If mail ballots aren’t your thing, you can still vote in-person at the polls. Every polling location will open up to three days early, on October 31.

Voters can also cast an in-person ballot at the San Diego County Registrar of Voters office as of October 5. The office is open from 8 a.m. until 5 p.m. Monday through Friday.

“If you choose to vote in person. Don't wait for the last day. Go the very first day that voting locations are open,” Secretary Padilla said.

If you’re going to the polls in person, make sure to double check the location. Your assigned polling place has probably changed from previous elections.

In San Diego County, they’ve gone from 1,548 locations last cycle to just 235, but election workers are bringing in larger venues, like Viejas Arena and the Convention Center.

“They’re strategically located. No less than 2,000 square feet in the majority of these locations to allow for physical distancing,” Vu said.

Vu said by shrinking the number of polling locations, they’re able to have the polls open for four days rather than one, which he hopes will help spread out voters and mitigate the risk of the virus.

For the first time statewide, you can sign up to track your ballot through a new tool called Where’s My Ballot? The system will send text alerts and emails when your ballot is mailed, when election officials receive it, when it’s been counted, and if there are any issues with your ballot that can be corrected, such as a missing signature.

“Do a little bit of homework, know the process. Decide how you're going to vote and do it early,” Padilla said.

A record 72 percent of California ballots were cast by mail in the March primary, so election officials are used to the process. But they’re still urging voters to have patience for a long count. Registrar Vu said he plans to take the full 30 days to certify the results.