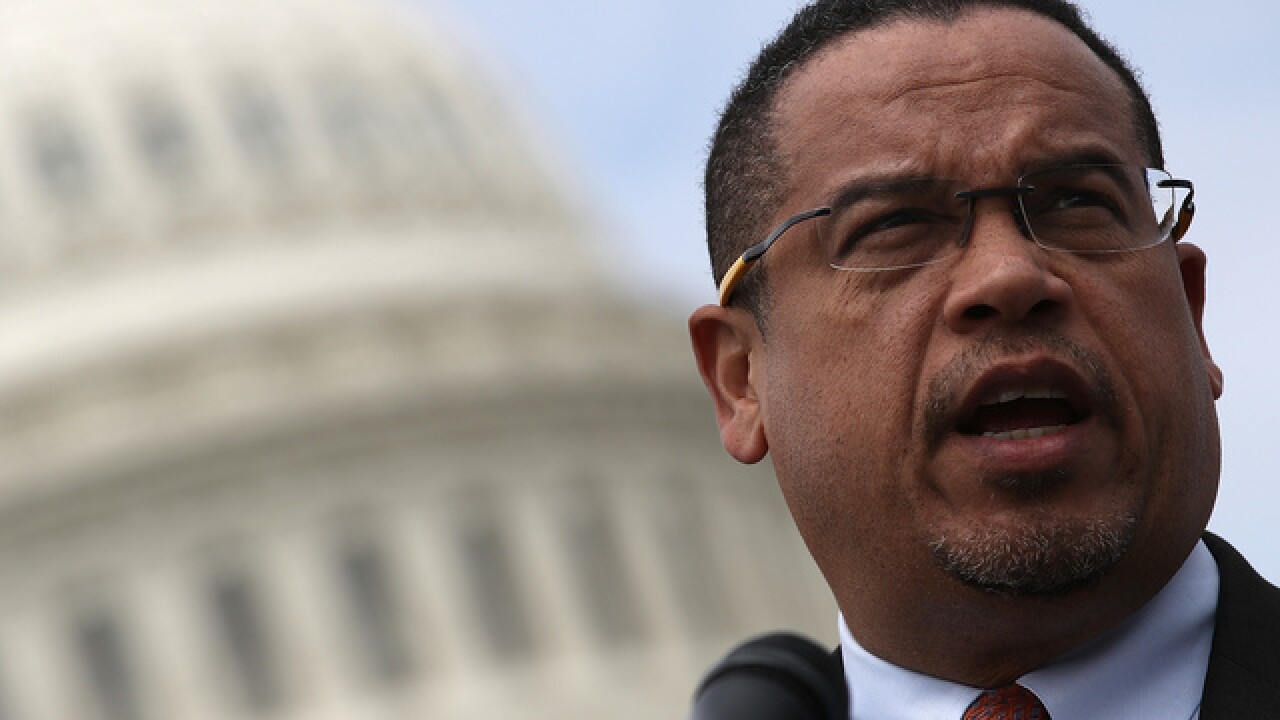 Image copyright 2018 Getty Images. All rights reserved. This material may not be published, broadcast, rewritten, or redistributed.
Win McNamee
<p>WASHINGTON, DC - MARCH 21: Rep. Keith Ellison (D-MN) waits to speak during a press conference outside the U.S. Capitol in opposition to the involvement of U.S. military forces in Syria March 21, 2017 in Washington, DC. U.S. members of Congress voiced their concern about "escalating U.S. involvement in the Syrian Civil WarÓ during the event. (Photo by Win McNamee/Getty Images)</p>

The seal of silence was broken by Senator Mazie Hirono on CNN’s State of the Union. “As far as Keith Ellison, these allegations need to be investigated and appropriate action taken,” Hirono said.

That answer came after Hirono was asked whether or not “concern about Kavanaugh and Professor Ford be more credible if Democrats were also condemning similar charges against Democrats in their midst, including Congressman Ellison?”

Allegations surfaced in August when the son of Ellison’s ex-girlfriend said the congressman abused his mother throughout the course of the relationship.

Austin Monahan says he found a video on his mother’s computer showing that Allison forcefully tried to drag his mother out of bed while screaming profanity.

Ellison has since denied the allegations.

(ABC) -- The federal government is set to conduct the first-ever test of a nationwide system to send emergency alerts to almost all cellphones in the country on October 3.

The "Presidential Alert" system uses the same wireless alerts smartphone users receive on AMBER alerts or severe weather warnings but allows the president, or another authorized official, to send simultaneous warnings to almost every smartphone in the country at the same time.

FEMA officials said that, unlike AMBER alerts or weather warnings that are sent to people in a specific area, the "Presidential Alert" would be triggered if the president, or another authorized official, decides there is "public peril" that merits a national notification.

(CNN) -- Former New York City Mayor Michael Bloomberg said in an interview that aired Sunday on CNN's "Fareed Zakaria GPS" he might move to run for president after the midterm elections this year.

"Right now I'm only focused on the midterms," Bloomberg said. "I believe that the Republicans have not done what they should have done in terms of providing some counterbalance to the executive branch."

He went on to add, "Afterwards, you take a look at it."