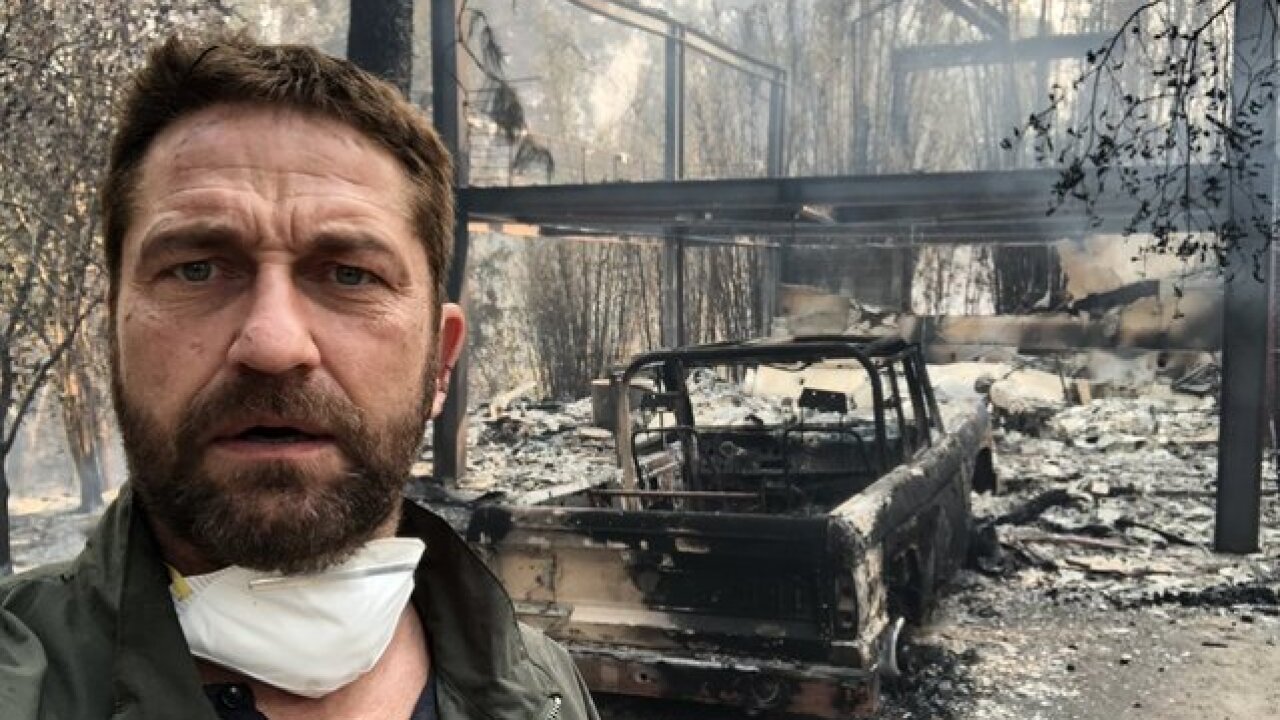 Copyright 2018 Scripps Media, Inc. All rights reserved. This material may not be published, broadcast, rewritten, or redistributed.
Gerard Butler

MALIBU (CNS) -The Woolsey Fire that has burned more than 85,500 acres in Los Angeles and Ventura counties has claimed the homes of several celebrities, along with the historic Paramount Ranch, where countless movies and television shows have been filmed since 1927.

The ranch -- which served as a location for shows such as ``MASH,'' ``Dr. Quinn, Medicine Woman,'' and most recently, HBO's ``Westworld'' -- was destroyed save for a chapel, according to the National Park Service, which operates the site.

The Peter Strauss Ranch, a regional park in the Santa Monica Mountains National Recreation Area, burned down, leaving only a few walls and a chimney. Johnny Cash and Willie Nelson were among the celebrities to perform at the ranch.

The mansion used for ABC's ``The Bachelor'' escaped total destruction, but the fire did burn the lower house. No one was at the location at the time with the current cast filming abroad, network officials said.

According to The Hollywood Reporter, at least a couple of drug- treatment centers, including Seasons and Creative Care, have lost buildings.

As officials warned residents not to return to evacuation zones and winds picked up Sunday, actor Gerard Butler issued the following tweet, which included a photo of him in front of a house that had been completely destroyed by fire.

``Returned to my house in Malibu after evacuating. Heartbreaking time across California,'' Butler wrote. ``Inspired as ever by the courage, spirit and sacrifice of firefighters.''

Oscar-winning director Guillermo del Toro tweeted that he drove back to his house on Friday to ``retrieve my notebooks and a small suitcase with 2 photos, 5 books and few small things.''

Camille Grammer's house was lost to the blaze despite firefighters' efforts. The former Real Housewives of Beverly Hills cast member and ex-wife of Kelsey Grammer posted a photo of the house with its roof in flames on Instagram and thanked firefighters.

``Sadly my house couldn't be saved,'' Grammer wrote. ``The courageous firefighters were able to save my cars and personal items recovered from my home. I thanked the fire captain and his team of firemen for all of their hard work.''

According to US Weekly, singer Robin Thicke also lost his Malibu home. People Magazine reported musician Liam Payne's home was also in danger. ``My heart goes out to everyone caught in the fires please stay safe and don't take unnecessary risks,'' he tweeted.`` I think I'm about to lose my house and
its memories. Even worse, tragically people have died.''

The homes of ``Dr. Strange'' director Scott Derrickson, Fox Sports' Eric Wynalda and model April Love Geary were destroyed by the fire.    ``We lost our home, but we are all safe and that's the important
thing,'' Derrickson tweeted Friday.

Actress Shannen Doherty also mourned the loss of her house, where she got married in 2011.

``It's the place I felt my dad with me. It's gone. Fire has taken it away,'' Doherty posted to Instagram. ``I'm devastated by all that's happening. My heart is ripped apart.''

Caitlyn Jenner's hilltop home was also reported to be in danger, with TMZ reporting that the house had burned down. Later reports said the house was still standing and Jenner said on her last post to Instagram, ``Don't know if the house made it or not. It's still up in the air.''

Milano was one of many celebrities who have tweeted, saying ``Horses are finally safe. My children are safe. My home is in jeopardy but... everything with a heartbeat is safe. Thank you all for your concern.''

Lady Gaga tweeted, ``I am thinking so deeply for everyone who is suffering today from these abominable fires & grieving the loss of their homes or loved ones. I'm sitting here with many of you wondering if my home will burst into flames. All we can do is pray together & for each other. God Bless
You.''

Cher, who has had a home in Malibu since 1972, said some of her friend's homes had been destroyed and worried about what would be left standing when the fire ended.

``I'm worried about my house but there is nothing I can do,'' the iconic singer posted to Twitter. ``I can't bear the thought of there being no Malibu.''

Kardashian said she had just gotten home to Calabasas when she was told she had an hour to pack up and evacuate Friday night. She posted video of the fire as she drove out of the area, posting to Instagram, ``Pray for Calabasas.''

Kardashian later posted that the fire had stopped short of her hillside home and said she and her family planned to donate to the California Fire Foundation.

Actor Will Smith's left even before his home was part of the mandatory evacuation area, tweeting: ``I don't like it, so we're gonna go.''

Actor Martin Sheen and his wife, Janet were said to be safe after their son, actor Charlie Sheen, tweeted on Friday that he couldn't locate them. A local news crew later found the elder Sheen on the beach where many local evacuees had gathered.

Celebrity giraffe Stanley, who lives at a Malibu winery popular for its ``safari'' tours, was reported safe. Rumors that the giraffe, whose Instagram account has more than 46,000 followers and whose fans include Kourtney and Khloe Kardashian, had been left behind spurred a thread of angry comments on social media. However, Malibu Wines' management team posted a picture of Stanley safe Friday night, telling worried fans that ``animal trainers are onsite right now feeding, providing water, repairing enclosures.''