Brussels prosecutors search for 'man in the hat' 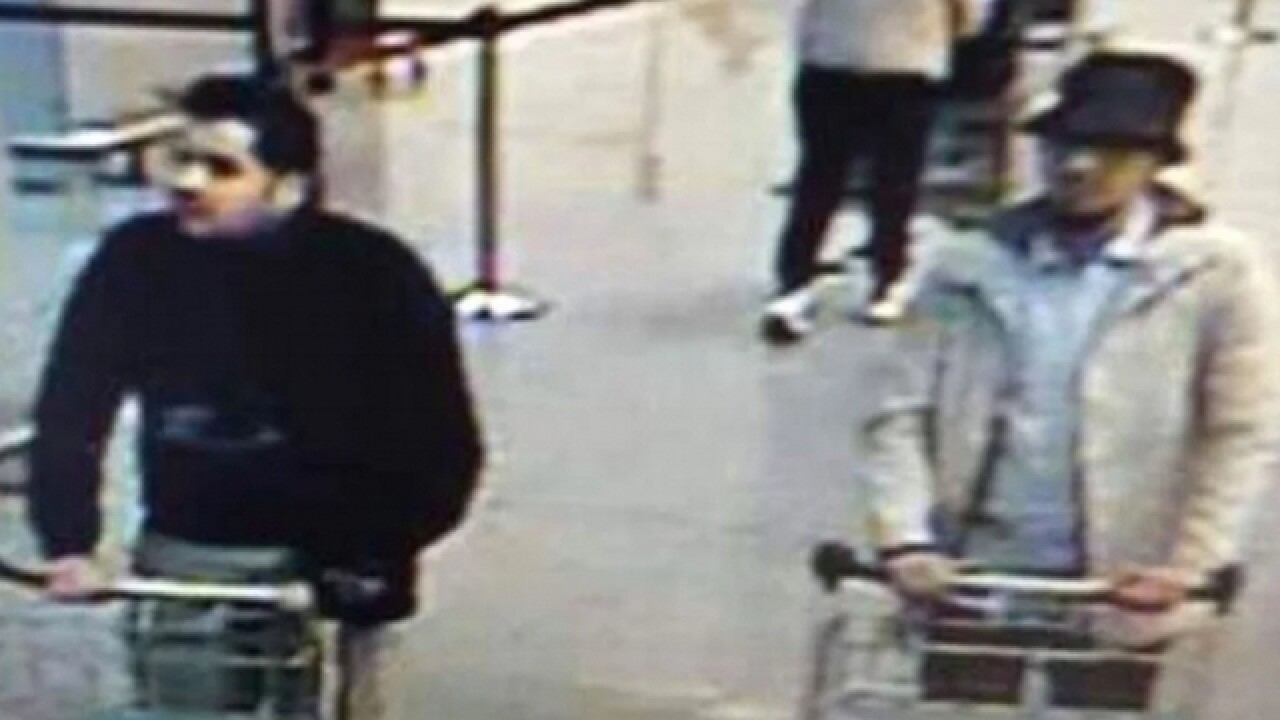 BRUSSELS (AP) — Belgian prosecutors launched a public appeal Thursday seeking any information on "the man in a hat" seen before the Brussels Airport suicide bombings that killed 16 people.

Belgian Federal Prosecutor Eric Van der Sypt said authorities were especially interested in any people who might have filmed or photographed him.

The suspect was seen at the airport with two suicide bombers before they died in the March 22 attacks. A subsequent explosion at Brussels' Maelbeek subway station killed another 16 people the same morning.

Photos released by prosecutors showed the man, who was wearing a dark hat, leaving the airport on foot, walking to the nearby town of Zaventem and then into Brussels, where all traces of him were reportedly lost.

The suspect also wore a white jacket but discarded it at some point, prosecutors said.

The appeal for public assistance more than two weeks after the suicide bombings indicates that investigators are at a standstill. Three bombers, two at the airport and one in the subway, also died in the attacks, which wounded 270 people and were claimed by Islamic State extremists.

According to a video reconstitution of the suspect's itinerary presented to reporters, the man left the Brussels Airport terminal at 7:58 a.m. before the two other men he was with there detonated suitcases laden with explosives. He passed by a Sheraton hotel and a rental car parking lot, walked through the town of Zaventem, discarded his jacket, and was seen on video footage at Meiser Square in northeastern Brussels at 9:42 a.m.

Belgian authorities hope that they or someone finds the discarded jacket, saying it could yield precious clues. Federal Prosecutor Thierry Werts also said many people who were around the hotel when the suspect walked by may now be overseas, and asked for their assistance as well.

Prosecutors asked "people who might have filmed or taken a photograph of the suspect or think they can provide extra information" to call a special telephone number or to email authorities.

Belgian media had earlier identified a Brussels resident arrested on terror charges as the missing man in the hat. But prosecutors never officially confirmed the reports, and a judge ordered the man's release.

Also Thursday, the lawyer for Paris attacks suspect Salah Abdeslam said it will take some weeks before his client can be extradited from Belgium to France.

Lawyer Sven Mary spoke after a legal hearing on the Belgian-born French citizen's continuing detention in Belgium. He said the existing "Belgian arrest warrant must be lifted for (Abdeslam's) transfer" to France, in accordance with the extradition request.

Mary said before Belgian authorities let Abdeslam leave they want to question the 26-year-old about another case — a deadly police raid in the Forest neighborhood of Brussels days before his arrest.

Abdeslam fled to Belgium after the deadly Nov. 13 attacks on Paris and was arrested March 18 after four months on the run. Since then he has been in a prison in the Belgian city of Bruges.

He faces preliminary terrorism charges in France for the Paris attacks, which killed 130 people, left hundreds wounded and were also claimed by the Islamic State group.