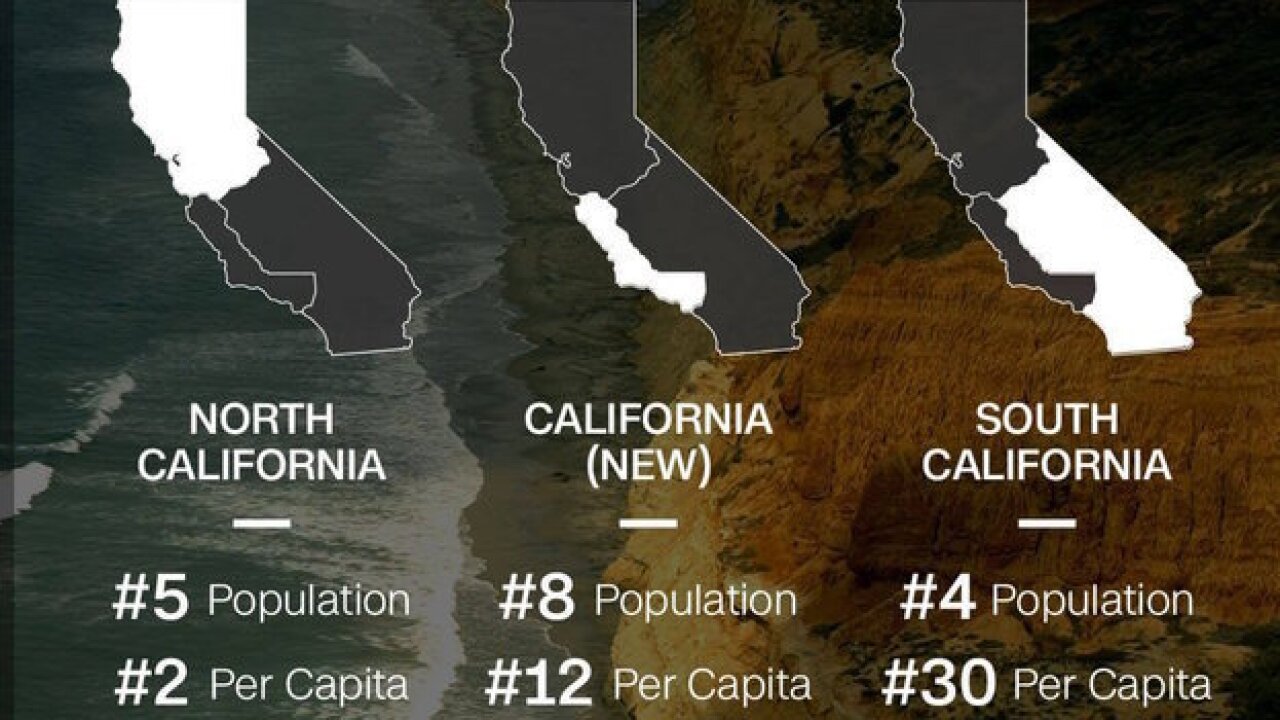 Copyright 2018 Scripps Media, Inc. All rights reserved. This material may not be published, broadcast, rewritten, or redistributed.
Getty Images
<p>A local venture capitalist's proposal to break up California, "CAL 3," gained nearly double the necessary signatures to get it on the ballot in November, which will allow state voters to decide on the partition.</p>

SACRAMENTO, Calif. (AP) — The billionaire behind a measure to split California in three said he's giving up on the effort to reimagine the nation's most populous state after the state Supreme Court knocked it off the November ballot.

"The political environment for radical change is right now," venture capitalist Tim Draper wrote in a letter to the court dated Aug. 2 and made public by his opponents Thursday. "The removal of Proposition 9 from the November ballot has effectively put an end to this movement."

The court struck Draper's measure in July in response to a lawsuit but didn't rule on the merits of the case, allowing Draper the opportunity to fight to put it on future ballots. He's not moving forward with the case.

Draper spent more than $1.7 million to qualify his initiative for the ballot, which requires gathering hundreds of thousands of signatures.

It's not his first effort to break up California — his plan to split the state into six didn't qualify for past ballots. He's argued California has become ungovernable due to its size and diversity, politically and geographically.

The latest plan would have divided California into three pieces. One would comprise the Bay Area, Silicon Valley, Sacramento and the rest of Northern California; the second would be a strip of land from Los Angeles to Monterey; and the third would include San Diego, the Central Valley and Orange County.

The Planning and Conservation League sued to keep Draper's initiative off the ballot, arguing that such a massive change to the state's governance couldn't be done through a ballot initiative.

"At the end of the day, this was a billionaire's massive and illegal use of the initiative process, and the court was correct in stopping this folly," Carlyle Hall, an attorney who worked on the suit with the environmental group.

Draper, meanwhile, said he had "no idea" if his initiative would have passed or if Congress would have given the necessary approval for the split but that the ballot measure would have spurred debate over government failings.

"I wanted to let the voters debate, discuss and think about a different way forward — essentially a reboot. And, I wanted the political class to hear and witness the frustration of California's voters with decades of inaction and decay," he wrote. "I believed there was significant benefit to our democracy in that."