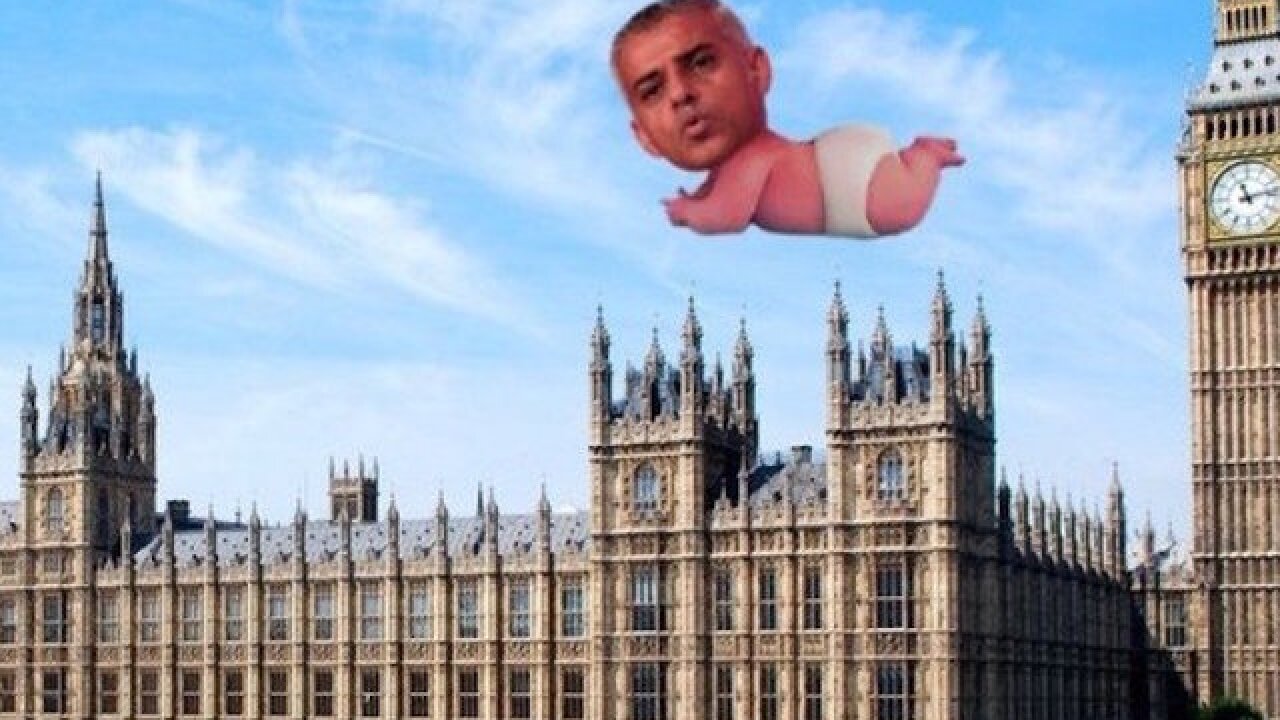 © 2018 Cable News Network, Inc.
Crowdfunder/Giant Sadiq Khan
<p>A giant blimp of London Mayor Sadiq Khan will be seen in the UK capital's skies this weekend after protesters were given permission to fly the crowdfunded balloon in Westminster.</p>

A giant blimp of London Mayor Sadiq Khan will be seen in the UK capital's skies this weekend after protesters were given permission to fly the crowdfunded balloon in Westminster.

Protest organizer Yanny Bruere, who describes himself as a British free speech advocate, said he had set up the crowdfunding campaign in response to London authorities' decision to allow a "Trump Baby" blimp to be flown during last month's visit to Britain by US President Donald Trump.

He said the Parliament Square event on Saturday morning "marks the fightback for free speech in our country."

Bruere, who has set up a "Make London Safe Again" group on Facebook, accuses Khan of doing too little to prevent violent crime in London.

The Crowdfunder page posted by Bruere said: "In light of the Donald Trump 'Baby Trump' ballon being allowed to fly over London during his visit to the U.K., let's get a 'baby Khan' one and see if FREE SPEECH applies to all and whether or not Mr Khan and the London assembly will also approve this.

"Under Sadiq Khan, we have seen crime sky rocket to unprecedented levels. People in London don't feel safe and they aren't safe... Khan Out."

Bruere added that any surplus money raised would "be used for a continuing campaign to remove Sadiq Khan from office and also for defending free speech."

London has seen a spike in knife crime over the past three years but the capital's Metropolitan Police Service insists it is still a safe city. Khan published a new knife crime strategy in June and promised to do everything possible to drive knife crime from London. The mayor has also called for the government to halt planned funding cuts to the Met Police.

The blimp's swimwear is a reference to a controversial weight-loss advertisement banned from the Transport for London network by Khan in 2016 that depicted a woman in a yellow bikini with the slogan "Are you beach body ready?"

A spokesperson for Khan said: "The City Hall 'city operations' team has spoken with the organizers of this balloon and given permission for them to use Parliament Square Garden.

"As always, City Hall has been working in very close coordination with the Metropolitan Police and other key agencies to ensure this protest is able to be carried out in a safe and secure way."

The request to fly the "Trump Baby" blimp in July was approved by city authorities and the mayor after more than 10,000 people signed a petition.

Khan, who was outspoken in his opposition to Trump's visit, criticized the US President over his tweets following the terror attacks in London last year.