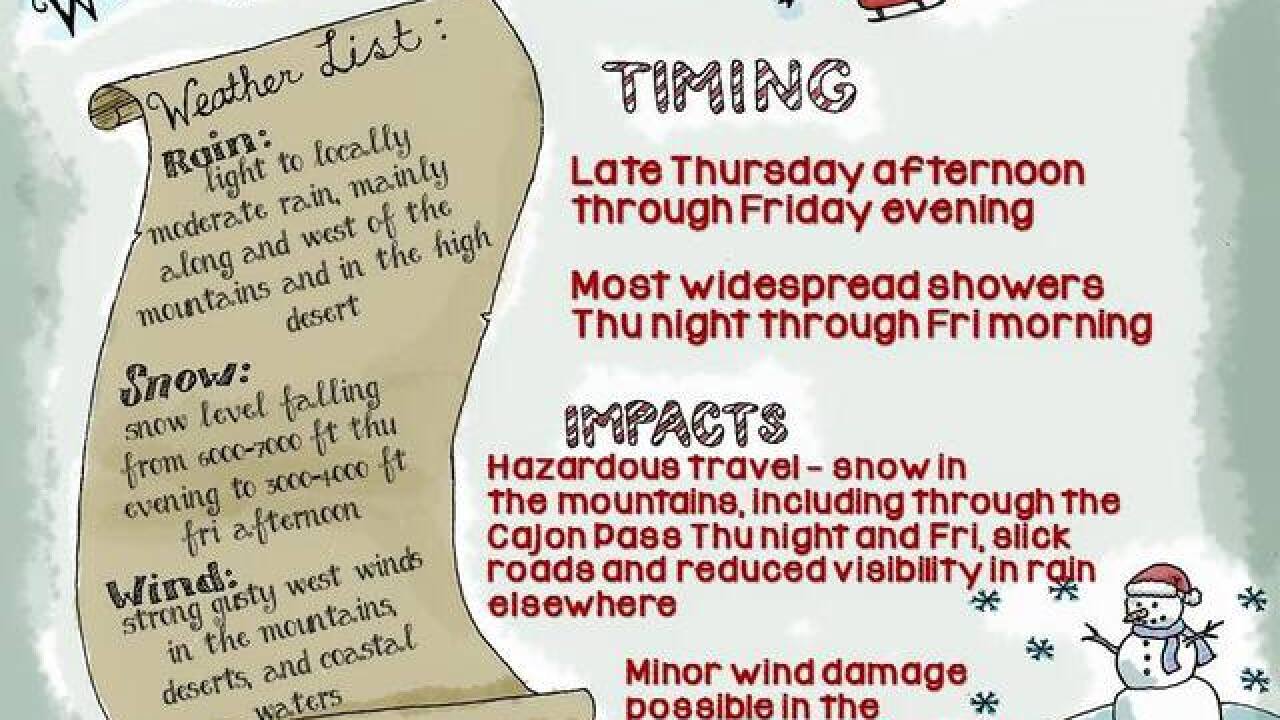 SAN DIEGO -- Rain, gusty winds and high tides hit parts of San Diego County Tuesday morning as a result of the first of two storm systems expected before Christmas.
Winds of 25 to 35 mph are expected in the mountains and deserts, along with gusts of about 55 mph and isolated gusts of up to 75 mph in some areas, until a National Weather Service wind advisory expires at 10 a.m. Wednesday.
Forecasters said the strong winds may lead to hazardous driving conditions, especially for motorists in high-profile vehicles. Visibility on some desert roadways may also be reduced due to blowing dust.
More rain is also expected in San Diego County. Over a 24-hour period ending at 9:30 a.m., automated gauges in the mountains recorded more than two inches of rain on Palomar Mountain and on Birch Hill; 1.42 inches in Pine Hills; 1.27 inches in Julian; 1.25 inches on Volcan Mountain; 1.12 inches at Lake Cuyamaca; 1.09 inches on Mount Laguna.
Lesser amounts were recorded in the valleys and along the coast, with Alpine and Oceanside topping the lists at .85 and .80 of an inch, respectively.
Forecasters said the heaviest precipitation today through early Wednesday would fall along the western slopes of the Riverside and San Diego County mountains. Up to 2 inches of rain could fall in some areas, although significant snow accumulations are not expected in areas lower than 7,000 feet.
At the coast, very high tides each morning through Christmas may lead to minor flooding in low-lying streets and parking lots nearby, according to the weather service. A coastal flood advisory will expire at 10 a.m. Friday.
The second storm system is expected Thursday night into Friday morning, and more gusty wind, cooler weather, light rain and light mountain snow will be possible, according to the NWS.
City News Service Modified 2015