A California Assemblymember Thursday requested a state audit to review how that City of San Diego responded to a recent Hepatitis A outbreak.

SAN DIEGO (KGTV) – A California Assemblymember Thursday requested a state audit to review how that City and County of San Diego responded to a recent hepatitis A outbreak.

In a letter to the Joint Legislative Audit Committee, Assemblymember Todd Gloria asks that the committee “determine whether both the County and City identified, contained, and treated the recent Hepatitis A virus (HAV) outbreak in accordance with statutory requirements and recommended procedures.”

“We owe it to the 20 people who died and the more than 500 who contracted Hepatitis A to learn exactly what went wrong and what could have been done better,” said Assemblymember Todd Gloria. “It is my hope this audit will help us better understand how the City and County managed the Hepatitis A outbreak and ultimately make certain our region is sufficiently prepared to handle any future public health crisis that may arise.”

According to the letter, the hepatitis A outbreak started in March of 2017. In September of 2017, county health officials declared a public health emergency.

The county ended the public health emergency declaration in January of 2018.

Assemblymember Gloria’s request for an audit will be heard by the committee on May 16.

A spokesperson for San Diego Mayor Kevin Faulconer responded with the following statement on the request for an audit:

“We welcome a thorough, third-party review of the City and County’s actions to determine what worked and what didn’t so something like this never happens again. We’re confident the audit will show the City took aggressive steps, from sanitation efforts to the largest expansion of homeless services in city history, to tackle this unprecedented public health crisis.”

How the outbreak started

San Diego’s hepatitis A outbreak started with the homeless and drug-using population, according to the county.

By September of 2017, the virus had sickened more than 400 people and killed 16 in San Diego County.

By mid-September nearly 50 people with no ties to homeless or drug users had been sickened with hepatitis A, according the San Diego County Public Health Department.

At that point, crews began power-washing sidewalks with a bleach solution in East Village downtown. 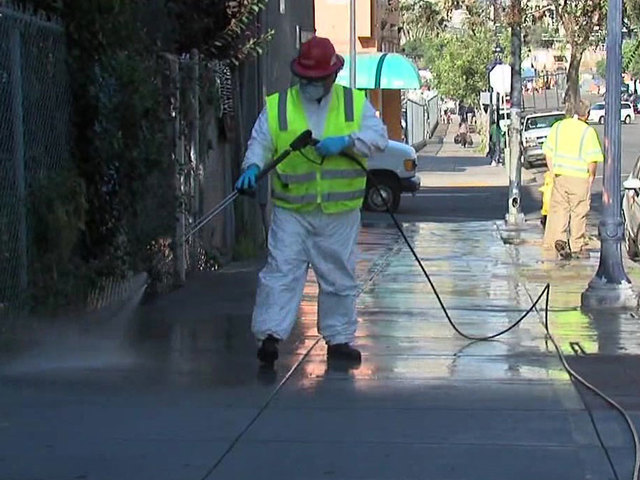 Looking at the bigger picture

The county says that so far, 588 cases have been reported while 403 people were hospitalized and 20 people died.

Due to the outbreak, the hepatitis A vaccine has been recommended for people who are homeless, illicit drug users, staff at homeless service providers and substance use treatment agencies.

The map below shows the number of hepatitis A cases by zip code in San Diego County: 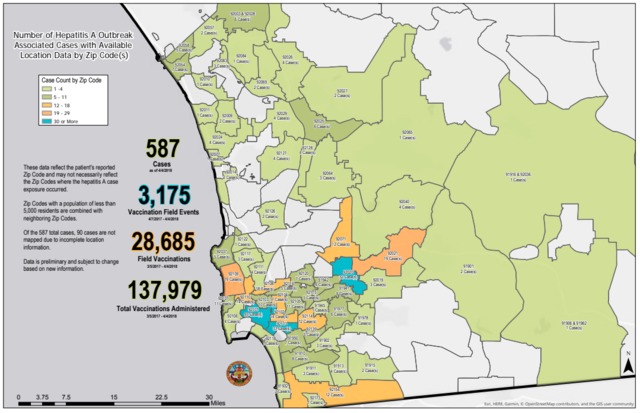