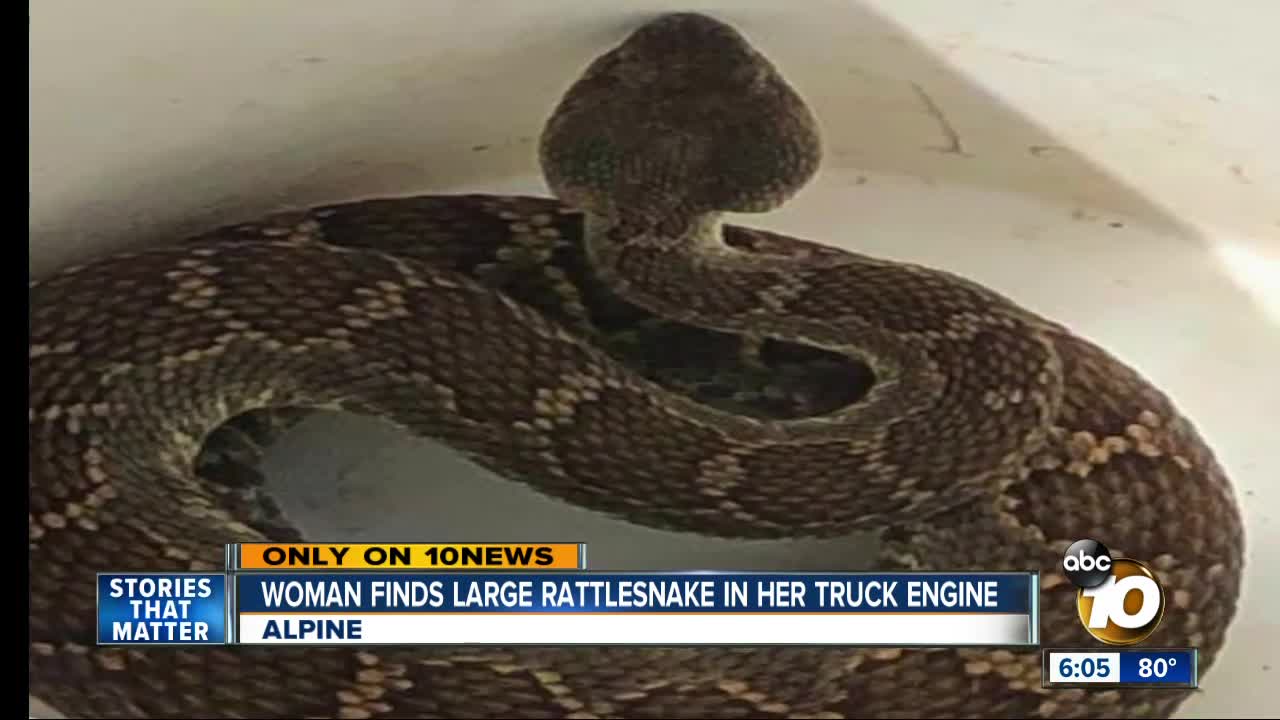 An East County woman is recounting the "breathless" moment after she looked in her truck engine and saw a very large rattlesnake. 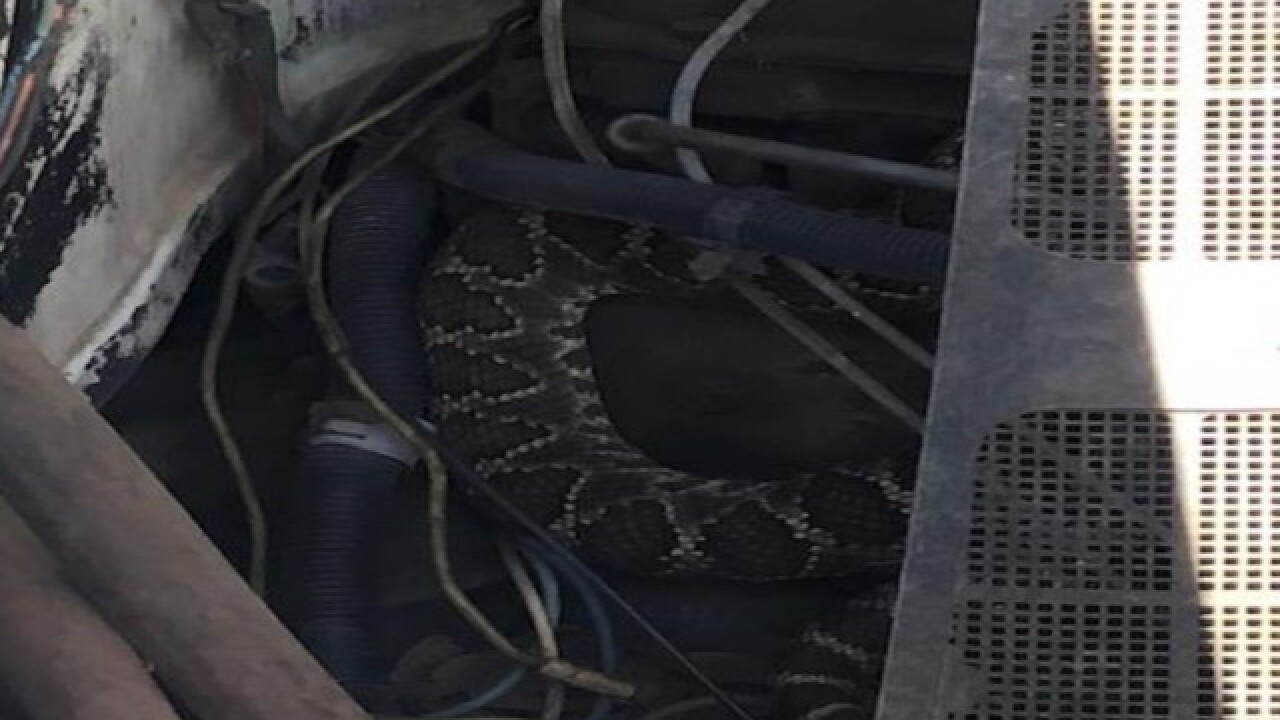 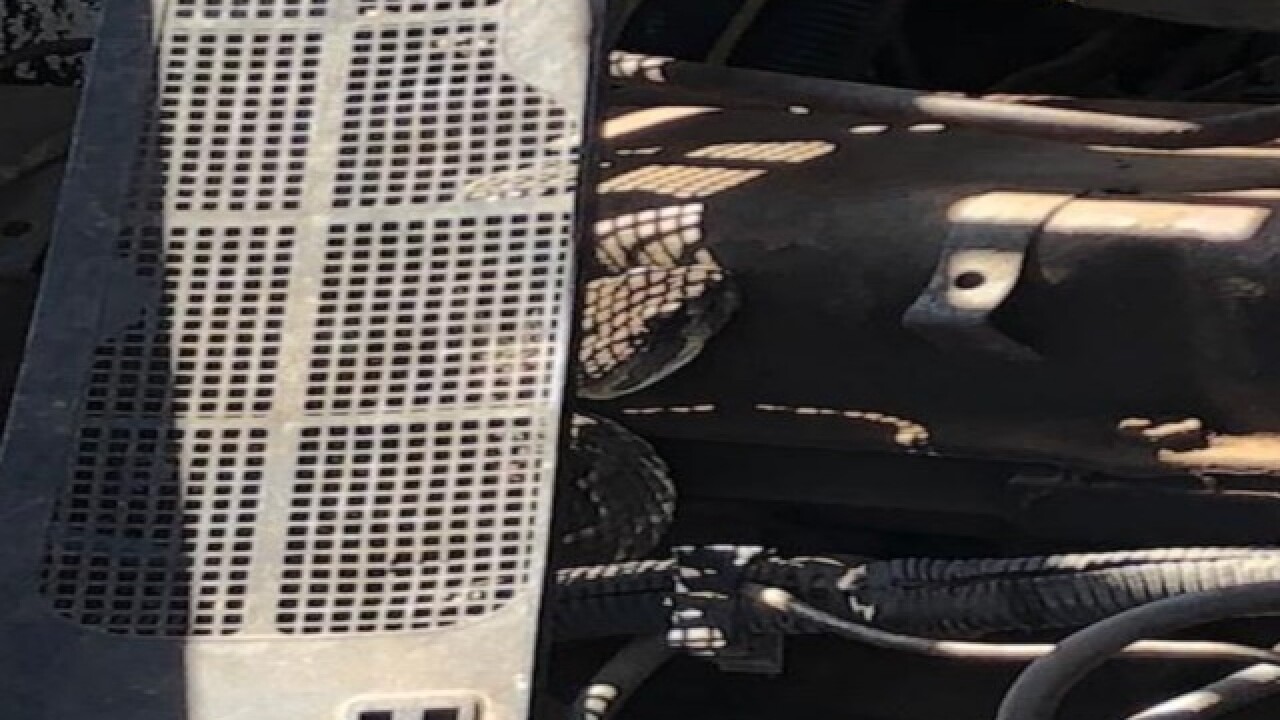 ALPINE, Calif (KGTV) - An East County woman is recounting the "breathless" moment after she looked in her truck engine and saw a very large rattlesnake.

In the backyard of a home along Foss Road sits a 1978 Chevy half-ton truck, Jules Piatek's first-ever vehicle.

"I love my truck. I tell my kids if I die, just bury me in my truck," said Piatek.

She's not alone when it comes to loving the truck.  Last week, just past 10 a.m., she stood in her yard and saw it.

"Glanced to my left and just caught a glimpse of the snake in my engine," said Piatek.

When Piatek took a closer look, she saw it's head and then the rest of it, coiled up near the starter.

"Oh, hell no! I don't want that snake anywhere near me. He was way too big and way too fat," said Piatek.

RELATED:  What to do in the event of a rattlesnake bite

"When you see it, you really start to panic. Holy crap, what is it going to do?" said Piatek.

What Piatek did manage to do was take a few photos, before calling up professional snake wrangler Tom Minga. He arrived and used snake tongs to remove it from the engine.

"It was shady, just in there just hanging out," said Minga.

Minga says it was a Southern Pacific, the most common local rattlesnake and about 4-feet long. It's hardly the first oversized rattler of the season. Minga just caught another one a few homes down.

A few days ago, 10News reported on the discovery of a 6-foot-long Red Diamond rattler that surprised a woman and her little dog in a Santee backyard.

Minga says the giant sizes mean despite the lack of rain this winter, food remains aplenty and the snakes should continue to be an active snake season. He added that he will relocate the rattlesnake somewhere in the backcountry.