A sports complex is housing thousands of migrants. It's at least 3 times above its capacity 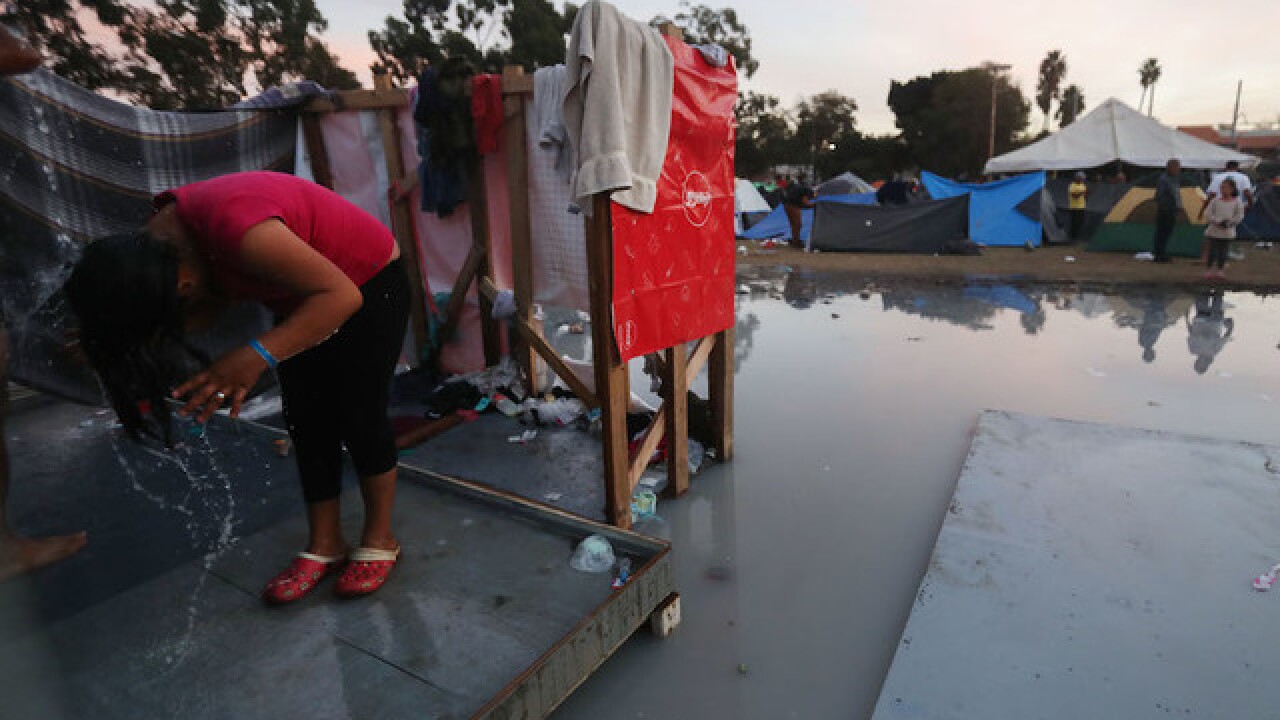 Image copyright 2018 Getty Images. All rights reserved. This material may not be published, broadcast, rewritten, or redistributed.
Mario Tama
<p>Standing water is seen near makeshift showers and portable toilets at a temporary shelter set up for members of the 'migrant caravan' on November 27, 2018 in Tijuana, Mexico. While most of the shelter grounds are dry, the area around the showers and toilets contains standing water. Many shelter residents complain of overcrowding and unsanitary conditions at the shelter which stands in sight of the U.S.-Mexico border. Around 6,000 migrants from Central America have arrived in the city with the mayor of Tijuana declaring the situation a 'humanitarian crisis'. </p>

The sports complex sheltering thousands of Central American migrants in this Mexican border city is well above its capacity, and more migrants are expected to arrive in the coming days.

More than 5,800 migrants have taken shelter in the Benito Juarez Sports Complex, according to Mexico's Social Development Secretariat.

State and municipal officials are looking to open another shelter, Olimpo said, but they haven't found any local business or space willing to rent out their facilities for the migrants.

Inside the sports complex, which has become the main facility sheltering migrants in Tijuana, migrants wait for hours in long lines for food. Tents cover sports fields and spill outside the facility's gates.

Many migrants say they're waiting for the chance to seek asylum in the United States. Given the massive backlog at the nearby port of entry, it could be weeks before they have a chance to cross the border and begin to make their case.

Meanwhile, the Mexican Red Cross has been providing medical assistance for migrants in the shelter. The Mexican navy has set up two small kitchens nearby the shelter, Olimpo said, and the federal government has installed two water plants.

But Amnesty International said on Monday the shelter doesn't have enough resources for migrants housed there, describing conditions as "unsanitary."

"Mexican federal, state and municipal officials separately confirmed to Amnesty International that the temporary shelter did not have sufficient food, water and health services, and that respiratory illnesses were spreading among those staying there," Amnesty said.

Tijuana's mayor has described the situation as a crisis and called for humanitarian help.

The growing number of migrants in Tijuana, a city of about 2 million people just south of California, is "a big problem" that "we are not capable of solving," Mayor Juan Manuel Gastélum told CNN.

The Mexican federal government -- with a new president due to be installed Saturday -- or the United Nations must step in, the mayor said, to "give us shelter, give them food, water, medicines, everything that a person needs to be dignified and have a place where they can stay dignified."

US officials defend use of tear gas

Thousands of Central American migrants have arrived in Tijuana in recent weeks. They were part of so-called caravans that trekked through Honduras, Guatemala and Mexico, largely on foot, to reach the US border and seek asylum.

Days after tensions flared and US officials fired tear gas at the border, the mood inside the massive Tijuana shelter was somber Tuesday. Some migrants said they were now unsure of what to do next. One mother told CNN she was shaken to see tear gas fired suddenly at what she thought was a peaceful protest.

US officials maintain that violence Sunday on the part of migrants who rushed the border and threw rocks left them with no other choice.

"The agents responded with the least amount of force that we possibly could," said Rodney Scott, chief of the US Customs and Border Protection's San Diego Sector.

He described what unfolded Sunday as a "flashpoint" in what is "still a very dynamic situation."

Agents tried to target "instigators" who were throwing rocks and bottles, but it was hard to identify them in the large, moving crowds.

Scott noted the tear gas fired is an irritant that does not cause permanent damage. And agents could use it again if violence erupts.

"We don't target women and children. If women and children choose to insert themselves into a violent crowd that is attacking police officers with rocks and bottles, there are going to be unintended consequences. ... US Border Patrol agents will not stand there, get assaulted with rocks and bottles and not respond," Scott said. "The pepper gas is an irritant. There's no permanent harm. But the easiest way to avoid it is comply with the law, go to the port of entry and get in line with everyone else."

Sunday's unrest at the San Ysidro crossing marked an escalation of tensions that have been mounting since groups of Central American migrants began arriving in Tijuana a few weeks ago on their journey to attempt entry into the United States.

The migrants' presence has drawn demonstrators -- for and against them -- and threats from President Trump to close the US-Mexico border.

Department of Homeland Security spokesman Tyler Houlton said Tuesday that CBP had arrested 42 people Sunday for illegally crossing the border, revising a higher figure the agency had previously released due to what Houlton said was confusion "in the heat of the moment."

The majority of people arrested were adult males, Houlton said.

Tijuana police said they arrested 39 people on the Mexican side.

Mexico's Interior Ministry said Monday that 98 migrants would be deported following the incident.

It was not clear from the ministry's statement how many of the migrants were among those arrested on Sunday or when the deportations would take place.