A Grand Compromise to Save the Chargers 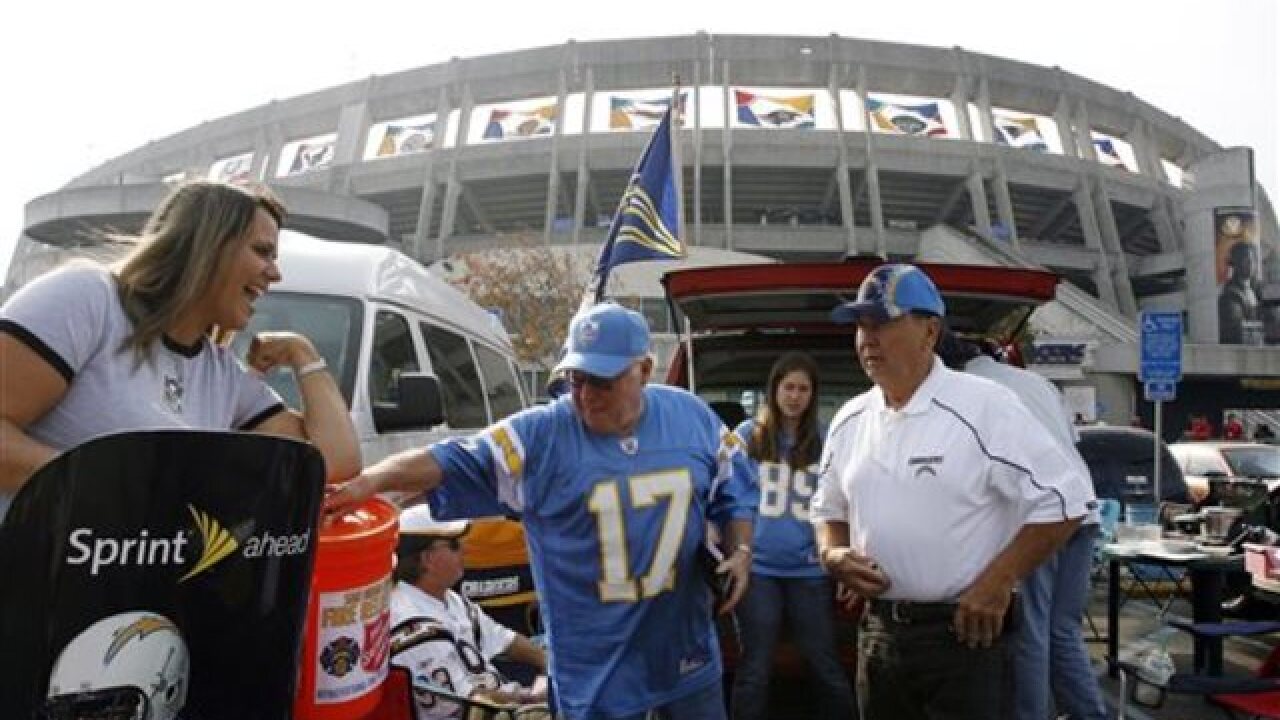 10News Sports Director Ben Higgins will be in Houston for the NFL meetings -- look for his live updates online and reports in our newscasts. TV LISTINGS

INT. A HOTEL LOBBY IN HOUSTON -- WEDNESDAY EVENING
Roger Goodell: “Hey, Ben. This is a mess. Our owners still haven’t come up with a Los Angeles solution. Got any ideas?”
Me: “As a matter of fact…”
Yes, the previous scenario seems a little far-fetched. In fact, NFL owners might start asking the housekeeping staff at the hotel for ideas before taking any suggestions from the media. Still, it’s good to be prepared. So, here’s my proposal for a grand compromise that gives the Rams, Chargers, Raiders and the rest of the NFL (most of) what they want.
First, let’s try to figure out what each side really wants, so we can get down to business.
RAMS: Stan Kroenke wants Los Angeles. He wants a palace in Inglewood and he’s willing to spend billions to get it. He’s basically spit on the offer of hundreds of millions in free money from the city of St. Louis to build a riverfront stadium there. He’s burned all his bridges by bashing his hometown and its fans in the pursuit of his goal.
CHARGERS: The Chargers want stadium certainty. They don’t want to be stuck in the dilapidated Q while the Rams, or anyone else, elbows them out of Los Angeles. Dean Spanos still likes San Diego but has no faith in politicians or voters to deliver a new stadium deal that both sides can live with.
RAIDERS: They want someone to solve their stadium problem for them. Mark Davis doesn’t really want to leave Oakland, but he’s also millions of miles away from getting a new stadium.
NFL: The league would like to get back to Los Angeles with a franchise, or franchises, that will build their brand and continue their domination of the American sports scene. Oh, and splitting a few hundred million dollars in relocation fees would be fine by ownership as well.
So how do we make everyone (reasonably) happy?
Let’s start by approving the Inglewood stadium project and getting those shovel-ready shovels into the ground. It’s the project favored by more NFL owners and is more likely to be embraced by Angelinos who grew up attending major sporting events in Inglewood at the Fabulous Forum. Kroenke’s project is the splash the NFL is looking for in Los Angeles.
Carson is just another really nice stadium in a league that has a lot of really nice stadiums. Dean Spanos says traffic is a major concern on the city streets around Inglewood, but I’ve driven hundreds of thousands of Southern California miles, and there is no bigger traffic nightmare than the 405 freeway. Try to cram 70,000 football fans into Carson, and people will get to their seats about four hours after the game is over.
With the Inglewood project winning approval, owners would allow the Rams to move to L.A. immediately and set up shop in the only NFL-sized temporary venue available in 2016, the Coliseum. L.A. gets the team that already has the most support in the community. Stan Kroenke pays his $550 million relocation fee.
So far, this sounds like a great deal for the Rams, but not so great for the Chargers or Raiders. Let’s fix that.
NFL owners should grant conditional approval for the Chargers to join the Rams in Inglewood in 2018 when the new stadium opens. Until then, the Chargers will remain at Qualcomm and be asked to work on a stadium solution in San Diego. This should give Dean Spanos the certainty he craves, and comes with some added benefits. Should a stadium plan ever come to a vote in San Diego, the guarantee that the Chargers will be moving if the vote fails should ensure the best chance of passage. If a vote fails, I believe the Chargers will have a better chance of keeping more fans from San Diego when they ultimately do move.
A new 10News/Union-Tribune poll showed that only 30 percent of Chargers fans in San Diego plan to stick with the team if it moves to Los Angeles. My strong belief is that if a fair vote went before voters and failed, fans would be much more understanding about a move. Furthermore, to offset the two-year head start in L.A. given to the Rams, the Chargers would be charged a $400 million relocation fee, saving the team $150 million very real dollars.
Finally, the Raiders would be given the most flexibility of the three teams. The NFL should promise to set aside $100 million of the relocation fees towards the construction of a new stadium for the Silver and Black. That stadium could be in Oakland, San Diego, St. Louis, San Antonio or wherever else Mark Davis thinks he can get the best deal. Or, if the Chargers successfully get a stadium built in San Diego, the Raiders would be given the option to join the Rams in Los Angeles.
If the Raiders do end up in another market, though, the NFL may get the best of both worlds: new stadiums for the Chargers, Rams and Raiders, plus an open slot for a second team in Los Angeles that can be used as a threat in the future to squeeze out public dollars when about 10 more NFL teams start looking for shiny new facilities in the next five to 15 years.
Obviously, this is just the outline of a plan. Still, it solves a lot of problems and could lead to a resolution that leaves just about everyone happy.
-- Follow Ben Higgins on Twitter @BenHigginsSD.

Off to Houston. Hope that when I get back they're still the SAN DIEGO Chargers. Live coverage this week on @10News. pic.twitter.com/AA5dLre0Ua