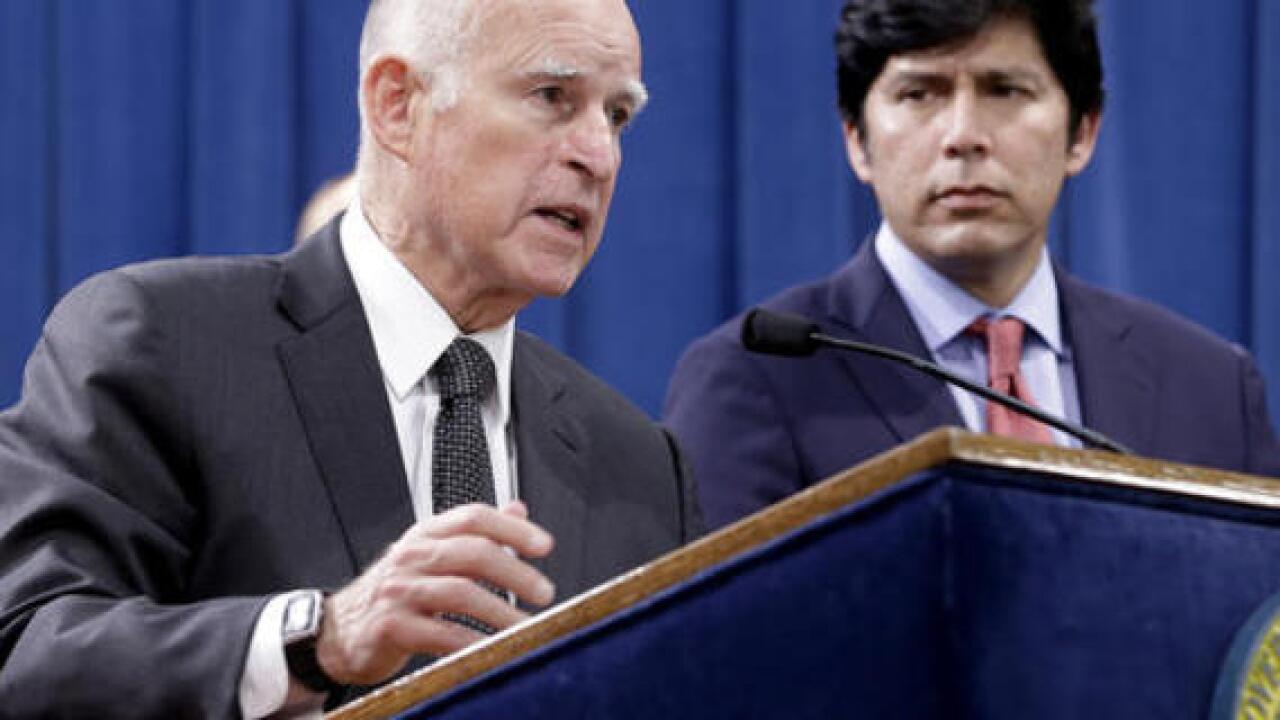 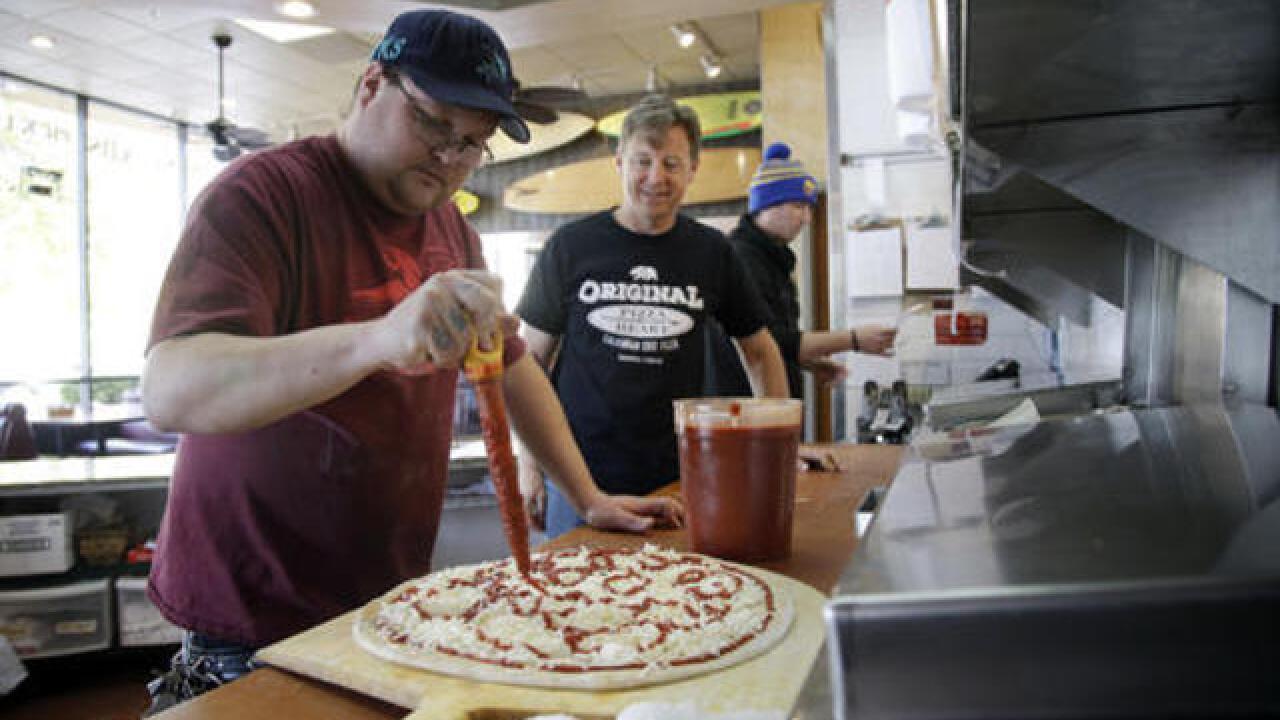 By: Don Thompson and Justin Pritchard, Associated Press writers
Posted at 6:48 AM, Mar 29, 2016
SACRAMENTO, Calif. -- A political deal to raise California's minimum wage to a nation-leading $15 an hour could help some workers cope with the state's crushing cost of living but also deprive other low-wage earners of jobs altogether, economists said as Gov. Jerry Brown and other leaders touted what would be a landmark agreement.
California's economy is larger than that of most countries, with a wide diversity of earners. While newly minted millionaires gentrify neighborhoods in the San Francisco Bay Area, some Central Valley field hands lack access to clean water. A jump from the current $10 an hour spread over six years would affect millions.
Rafael Gutierrez, a 53-year-old farmworker, said the increase would let him treat his family to weekend dinners out and a short vacation to Disneyland from his home in Fresno County.
His last job picking peaches and grapes paid $11 an hour. His girlfriend makes $14 an hour at Target. Though their region is far from California's costliest, "Right now, we're just making it," Gutierrez said. "Life is expensive."
And then there are employers such as Chuck Herrin, owner of Sunrise Farm Labor, which provides roughly 2,500 workers each year with jobs in the San Joaquin Valley. Herrin predicted that farmers would hire 10 percent fewer workers because of the higher cost of business.
"It's going to be devastating," said Herrin of the impact on fieldworkers and their dependent relatives.
On Monday, Brown touted the deal his administration struck with legislative and labor leaders as potentially historic, calling it a matter of economic justice. Under the proposal, which the Legislature has yet to approve, the minimum wage would rise gradually, reaching $15 by 2022.
After that wages would rise with inflation, though in tough economic times the governor could delay increases.
Lawmakers could send the bill to Brown's desk as early as Thursday, said Sen. Mark Leno, a San Francisco Democrat.
The hike would create the nation's highest statewide minimum wage. California and Massachusetts are the current highest at $10. Washington, D.C., stands at $10.50.
Oregon's governor signed legislation this year that would raise wages by 2022 depending on location. In the largest city of Portland, the minimum will rise to $14.75. Rural areas would see an increase to $12.50.
Income inequality has emerged as a top issue nationally, with President Barack Obama proposing an increase to the federal minimum wage and Democratic presidential candidate Bernie Sanders pushing a $15-per-hour standard.
In California's most-desirable areas, gas, housing, food and other essentials can bring sticker shock. While the median price of homes sold in the state is about $400,000, a fixer-upper in San Francisco or parts of Los Angeles can easily top $1 million.
About 4 million workers in California earn wages in the $10 to $15 range, according to calculations by Jeffrey Clemens, an economics professor at the University of California at San Diego. "The key question is what fraction of these workers will be lifted to the new minimum and what fraction will lose their jobs," Clemens wrote in an email.
Advocates for the wage increase and their economists put the number of affected workers at closer to 6 million.
Economists including Clemens said in interviews that projecting what would happen in California is tough because the proposed increase is significantly larger than those in the past and may have unintended consequences.
One leading economist on minimum wage issues said an increase from $10 to $15 would reduce employment among the least-skilled workers by at least 5 to 10 percent. But the impact on employment might be even bigger because employers would have to absorb significantly higher costs.
"I would go so far as to call this reckless," said David Neumark, an economics professor at the University of California, Irvine.
Neumark noted that the effects would vary by geography: In high-wage counties such as San Francisco and Santa Clara, about 22 percent of workers would get a raise. In places such as Fresno and Merced counties, about half the workers would see more money.
San Francisco voters approved a measure two years ago to increase the minimum wage of $10.74 an hour to $15 in 2018. It's currently $12.25.
Brian Hibbs, owner of comic book and graphic novel store Comix Experience, said he supports the idea of a minimum standard of living, but he thinks the wage hike won't accomplish that because it will hurt small businesses. Projecting that his payroll for six employees will be $40,000 greater in 2018, he started a graphic novel membership club to meet the new wage requirements. If the membership doesn't grow, he said, he may have to close.
"I don't think this was thought through," he said. "The cost of labor is so high. It's very, very difficult to run a profitable business at this point."
Yasmin Fernandez, an activist who has sought a higher minimum wage, works in San Jose as a cashier at a gas station in the morning and at a Panda Express restaurant in the afternoon and evening.
The 34-year-old said she takes home about $2,400 per month after taxes. After paying her living expenses and helping her widowed mother, sick brother and four nephews back in Mexico, she usually has about $150 left for herself. She works from 6 a.m. to 11:30 p.m. almost every day.
An increase to the minimum wage "will be heavenly," she said, describing how it would offer "a little more money for me, to maybe go to a concert or do something fun once in a while," as well as "help my family even more."
___
Pritchard reported from Los Angeles. Associated Press writers Scott Smith in Fresno and Sudhin Thanawala and Olga R. Rodriguez in San Francisco also contributed to this report.
Associated Press 2016