La Mesa mom: Airline wanted another payment to sit next to toddler on flight 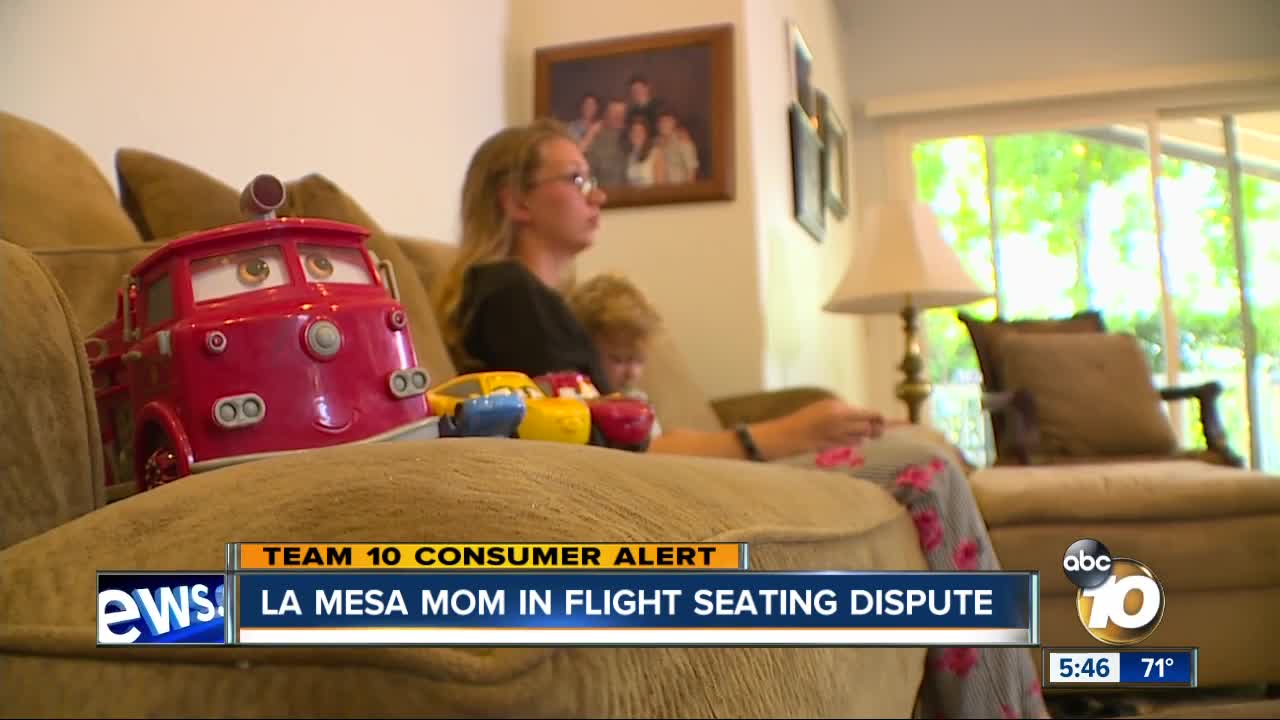 She said Sun Country Airlines told her to pay $75 extra to sit next to her 2-year-old. Airline told Team 10 it was an "error." LA MESA (KGTV) -- It was a frustrating flight for one mother in La Mesa, who said an airline would not allow her to sit next to her toddler without forking over extra cash.

Aliss, who declined to use her last name, said she chose seats together when she booked her ticket through a third-party website. Aliss and her son, Kai, were travelling from Providence, Rhode Island back to San Diego with a layover in Minneapolis. When she got to the airport in Providence, her seat on her Sun Country Airlines flight was not next to her child.

“I would have never booked a flight where we couldn’t sit together,” Aliss said. She said her options were limited and that the representative with the airline said she could charge her a $75 fee.

“I can’t pay that. What else can we do? And she said, well for $22 I can move you guys in a row front and back of each other. I said that doesn’t help my problem. He’s still not sitting next to me,” Aliss said. She said she told the airline representative not to charge her the money, but she was charged anyway.

She said she did not get help from anyone with the airline, including the flight attendant.

“She said no, you’re on your own. You’ll just have to argue with people,” Aliss said. Fortunately, a grandmother ended up giving up her seat so Aliss could sit with Kai. That was only the beginning of her problems. From Minneapolis to San Diego, Aliss’ flight was delayed. At first, it was only three hours.

“No big deal,” she said. She tried keeping Kai entertained and saw many other parents in a similar situation. The three hour delay became much longer with passengers unclear on when they were going to leave.

“It was confusing, frustrating,” Aliss said. She said they were promised $200 vouchers for the long delay. Aliss said their 3:10 p.m. flight finally left around 12:30 a.m.

Team 10 contacted Sun Country Airlines, who apologized for what happened. In a statement, a spokesperson told Team 10:

“This was not the level of service we aim to provide, as it is our policy that children always be seated with an adult on the itinerary at no cost. We have followed up with our airport staff on this error to ensure our policy is being carried out correctly. We have issued a full refund to the passenger for the fees incurred at the counter related to the seat assignment. We were also able to ensure two seats were assigned next to one another on her return flight. Our team has resent the $200 vouchers from the flight delay to the email we have on file, and we are adding an additional $100 voucher for the inconvenience.”

Aliss said it was a lesson for her to be prepared and to, “be wise with who you spend your money with.”

A few years ago, Congress passed the Families Flying Together act, which was supposed to keep parents and children together on planes. However, the Department of Transportation has yet to implement it.

It's unclear if or when they will do so. Team 10 contacted the DOT’s media relations, but has yet to hear back.