These are the rides, foods, toys you'll get to enjoy at Disneyland's 'Star Wars: Galaxy's Edge' 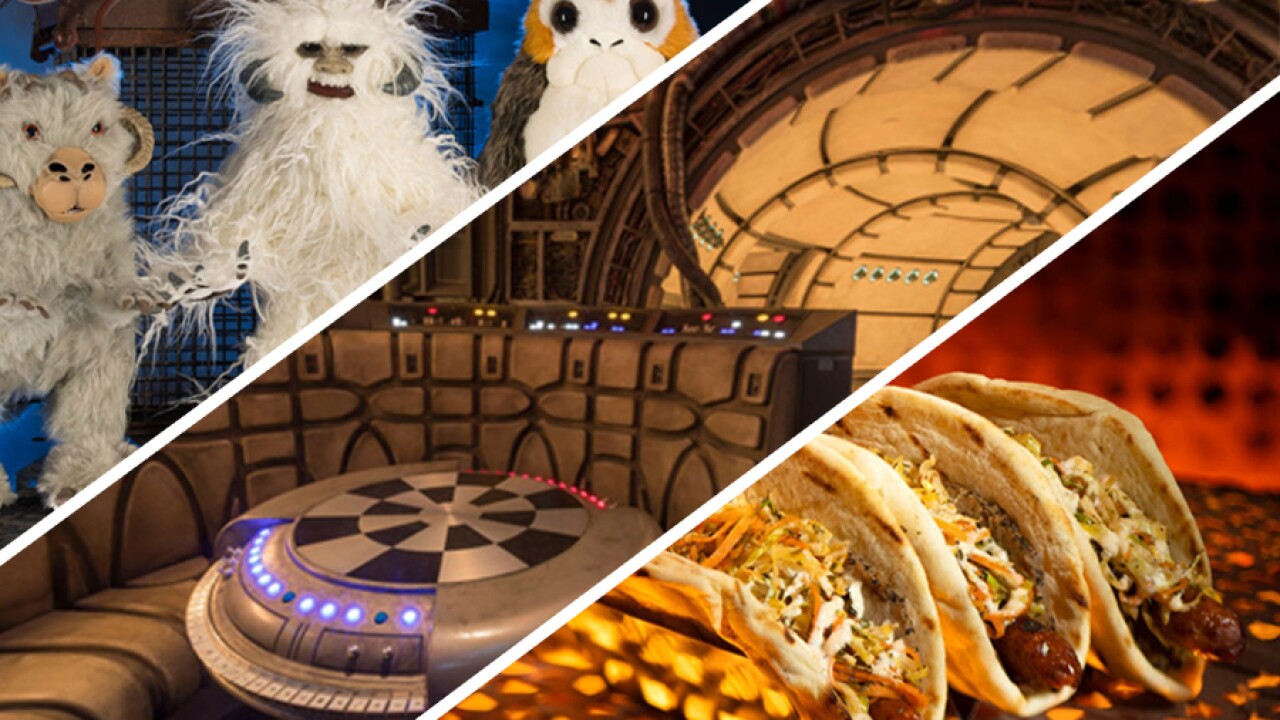 (KGTV) — "Star Wars" fans have been waiting with Jedi-like patience — perhaps, barely — for Disney to reveal its version of a galaxy far, far away.

"Star Wars: Galaxy's Edge" is set to open at Disneyland Resort this summer and Walt Disney World Resort this fall, and has promised to fully immerse guests into the "Star Wars" universe at Black Spire Outpost on the planet Batuu.

While the secrets of the outpost remain for guests of the remote planet to discover, Disney has shared details about the rides, foods and drinks, and merchandise fans will get to experience and enjoy at the theme parks' expansion.

The attractions at "Galaxy's Edge" aim to be some of the most ambitious rides at the theme parks, launching park-goers into their own "Star Wars" adventures.

Millennium Falcon: Smuggler's Run invites a new generation of smugglers to board the Han Solo's iconic vessel and control the ship from the cockpit with a crew of pilots, gunners, and engineers. The adventure will put guests in complete control of the ride, as the decisions of guests and its effects are created in real-time, according to Dan Brooks, Lucasfilm senior content strategist and editor of StarWars.com.

“It’s a completely interactive experience,” Scott Trowbridge, studio leader at Walt Disney Imagineering, tells Brooks. “So if you don’t fire and hit that TIE fighter that’s coming after you, it may get some shots and create some damage on the ship that then you have to fix. If you don’t fly right, you smash into a wall. You’re truly in control of what happens on your mission.”

Every detail of the Falcon can be seen in its halls as well, from random gear and cables to scuffs along the walls and the dejarik table — just remember to let the Wookie win.

Rise of the Resistance pits guests into a different adventure, smack dab in a First Order Star Destroyer trying to escape a fleet of Stormtroopers and Kylo Ren himself. Guests journey through the attraction on a trackless vehicle, meeting Rey (actress Daisy Ridley), Finn (actor John Boyega), and Poe (actor Oscar Isaac) along the way.

There are even life-size recreations of Poe Dameron's X-Wing and A-Wing fighters and TIE fighters.

"The journey from the entrance to the ride location is seamless, and the hangar of the Star Destroyer is downright huge," Brooks describes.

THE FOODS AND DRINKS

"Galaxy's Edge" won't feature your everyday hot dog and candy options. Guests are in a whole different culinary universe (for the better.)

Guests can choose from eateries like Docking Bay 7 Food and Cargo, Ronto Roasters, the Milk Stand, Kat Saka's Kettle, and Oga's Cantina for an assortment of dishes and drinks capturing the "Star Wars" universe.

And of course, there are the treats. Guests can indulge in desserts like raspberry creme puffs, chocolate cake, and a space-age kettle corn mix — all of which have their own very "Star Wars" name.

Creative drinks, of both the alcoholic and non-alcoholic nature, will also keep guests immersed. Colorful concoctions like the Tatooine Sunset (tea-based drink), Moof Juice (a fruit juice), and even Blue and Green Milk, the latter made popular in the latest "Star Wars" film, are all family-friendly options.

Alcoholic selections like The Fuzzy Tauntaun, The Bespin Fizz, and The Outer Rim will look straight out of the films, sometimes bubbly and sometimes smokey. A selection of beers is also on tap for guests.

THE TOYS AND GEAR

From lightsabers to droids to Jedi outfits, guests will be able to assume their ideal "Star Wars" identity.

Dok-Ondar’s Den of Antiquities will feature rare and unique items, like Jedi artifacts, from across the "Star Wars" galaxy. For the Jedi, Savi’s Workshop offers hand-built lightsabers, custom made by guests — hopefully to provide balance to the universe. We're looking at you, Sith.

The Droid Depot allows park-goers to construct their own droids to accompany them throughout the land. If guests value a different companion, the Creature Stall provides Porgs, tauntauns, and more. The Toydarian Toymaker also has an assortment of plush characters, wooden and tin toys, and trinkets for purchase.

Guests can jump into even more immersive adventures using the Disney Parks Mobile App, which will provide new opportunities in the park for guests to engage with, like translating galactic languages, learning the contents hidden inside crates, and accomplishing certain tasks.

The app can also interact with a variety of park elements, like droids, ships, screens, door panels, and more.

And above the entire experience, "Star Wars" composer John Williams has provided musical scores created specifically for the park expansion. New music by other composers from around the world will also help deepen the experience as guests walk around.