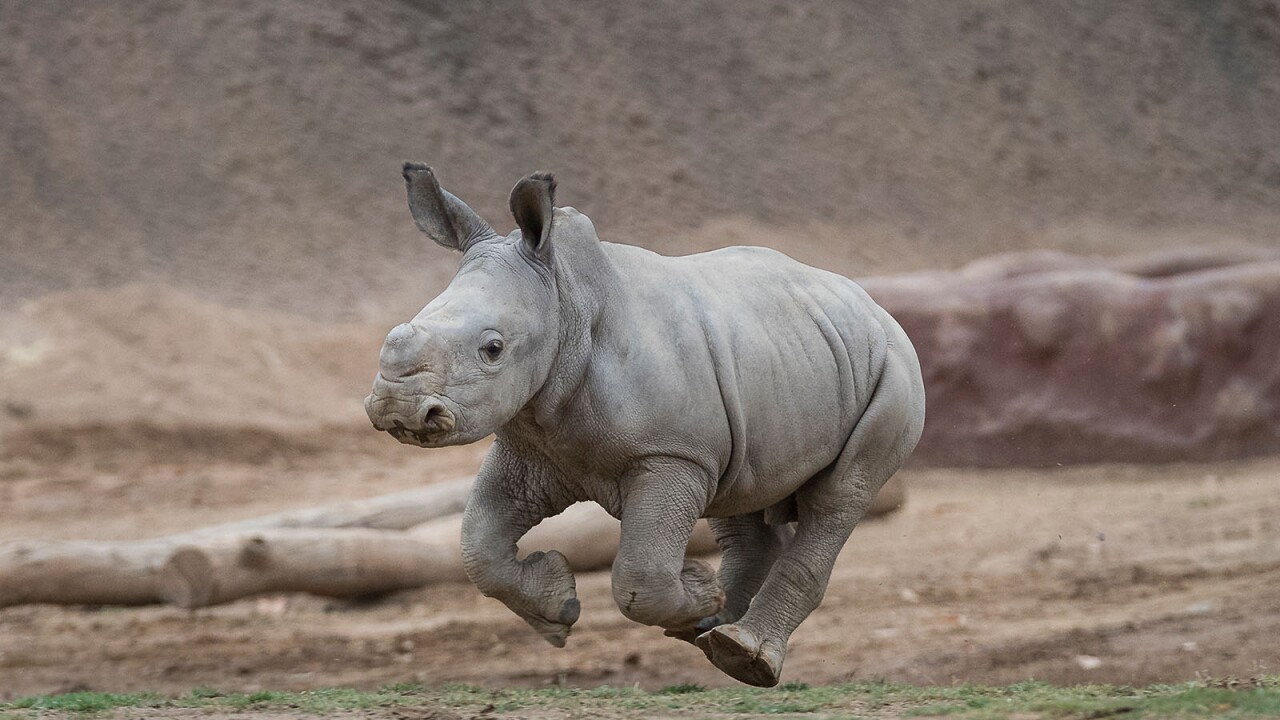 Ken Bohn
Three-Week-Old Southern White Rhino Calf “Gets Air” at the San Diego Zoo Safari Park Edward, a southern white rhino calf at the San Diego Zoo Safari Park, “gets air” as he runs around and explores the exhibit yard at the Nikita Kahn Rhino Rescue Center for his first time. The 22-day-old calf and his mom were given access to the main exhibit yard and took full advantage of the larger space, running around the perimeter at a fast pace. The pair ran at top speed, nonstop for almost 30 minutes, before slowing down and cooling off in a mud wallow. It was mom and calf’s first day out of the maternity yard since the calf was born Sunday, July 28, 2019. The successful birth of Edward, to mother Victoria, was groundbreaking for San Diego Zoo Global: He is the conservation organization’s first rhino to be born following hormone-induced ovulation and artificial insemination. Artificial insemination of rhinos has rarely been attempted, and this is the first successful artificial insemination birth of a southern white rhino in North America. The artificial insemination and successful birth of this rhino calf represents a critical step in the organization’s ongoing work to develop the scientific knowledge required to genetically recover the northern white rhino, a distant subspecies of the southern white rhino. Only two northern white rhinos currently remain on Earth and, unfortunately, both are female. On any given day, visitors to the Safari Park may be able to see the little rhino and his mother from the Africa Tram, as their keepers rotate them—along with the other five southern white rhinos residing at the Rhino Rescue Center—from the back area to the front exhibit yard. For more information on San Diego Zoo Global’s rhino conservation efforts, visit sandiegozoo.org/rhinos.

SAN DIEGO (CNS) - The San Diego Zoo Safari Park's youngest southern white rhino began integrating with the rest of the park's rhino herd Wednesday, meeting a rhino other than his mother for the first time since his birth 10 weeks ago.

Edward and his mother, Victoria, have remained sequestered from the rest of the herd since his birth in July to allow the two to bond and ensure he builds weight and stamina. The calf's weight has nearly quadrupled since then and he has only entered the Safari Park's rhino enclosure with Victoria.

Edward met Helene, an adult female southern white rhino, after she sparred with Victoria, who was very protective of her calf, according to the zoo's animal care staff. They will continue introducing him to the rest of the Safari Park's crash of rhinos as he gets larger and older.

"While Victoria knows the other rhinos, Edward has only observed them from a distance," Safari Park Lead Keeper Jonnie Capiro said. "It's time to get Edward acclimated to his crash. We chose to have Helene meet him first, as she is closely bonded with Victoria."

If the plan proves successful, researchers could attempt similar assisted reproduction techniques with the critically endangered Sumatran and Javan rhinos.