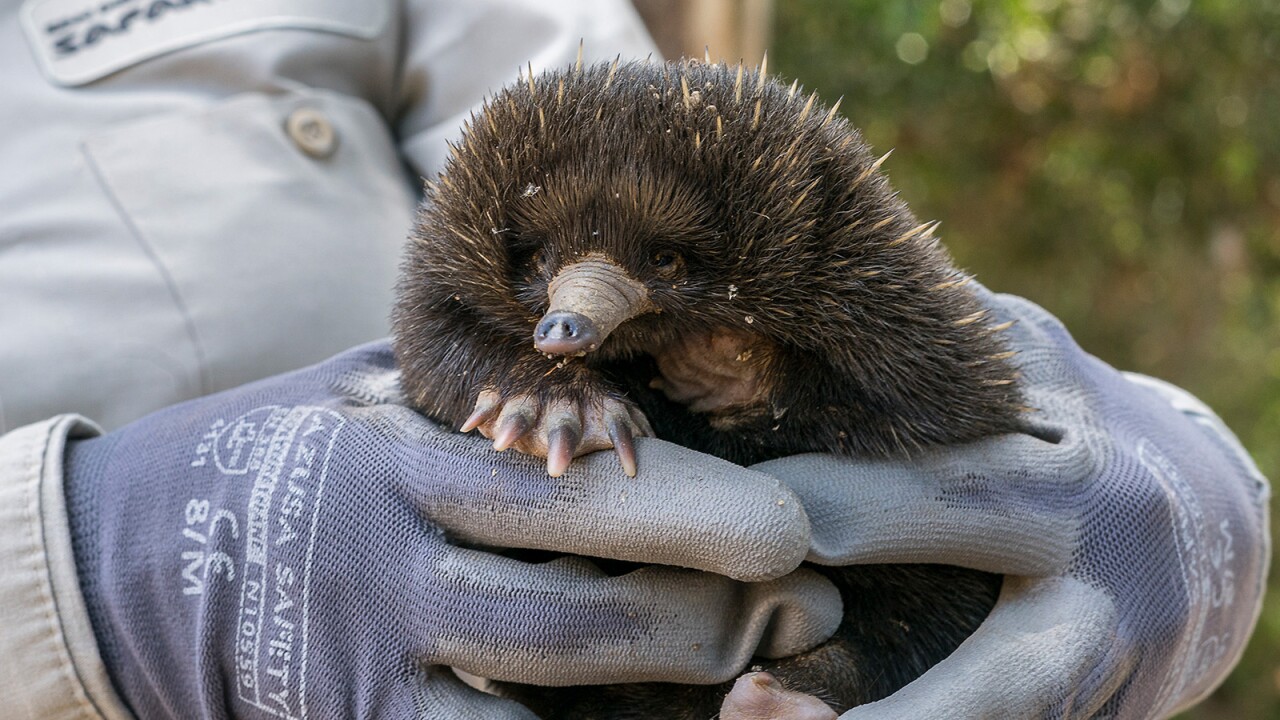 Ken Bohn/Photo taken on June 25, 2020 by
A wildlife care specialist at the San Diego Zoo Safari Park holds a four-month-old echidna (ih-KID-na) baby—or puggle. The puggle – the first-ever to hatch at the San Diego Zoo Safari Park - was estimated to have hatched on Feb. 14, 2020. This unique, tiny, spiny Australian species has small eyes and a distinctive beak, or snout. The puggle is still developing its protective spines, and has begun moving around on its wobbly little legs as it grows and gains strength—using its sharp claws to dig into the ground and keep its balance.

SAN DIEGO (KGTV) — For the first time in San Diego Zoo history, an echidna baby, commonly referred to as a puggle, has hatched at the San Diego Zoo Safari Park.

Zoo officials say the tiny animal is estimated to have hatched on Feb. 14, 2020. Echidnas only breed once a year, before the mother lays an egg about the size of a grape and keeps it in a pouch in her abdomen. After seven to 10 days, a tiny puggle smaller than a jelly bean hatches. It attached itself to hairs within the mother's pouch, where it feeds on milk. Around six to eight weeks old, the puggle develops spike spines and the mother places it in a specially made nursing where she feeds it every three to six days.

The puggle's mother, named Orange, and father, Shaw, also reside at the Safari Park. The tiny, spiny Australians species will spend most of its day sleeping, growing, and developing in its burrow.

“We are thrilled and excited to welcome our first-ever echidna puggle at the San Diego Zoo Safari Park,” said Savanna Smith, wildlife care specialist, San Diego Zoo Safari Park. “It is an honor to care for this little one, as we learn more about this species’ reproduction through this puggle’s hatching. Mom and puggle are doing extremely well, and we will continue to monitor the puggle’s progress until it is ready to venture out on its own.”

Echidnas are one of only two Australian mammals that lay eggs, the other being a platypus. They are notoriously difficult to breed in managed care, the zoo adds, making this even more momentous for the zoo.

The sex of the animal has yet to be determined.

It is expected that the young puggle will start venturing out on its own at about six to seven months old. Guests will however be able to see adult echidnas on occasion in the animal ambassador area in the park's Walkabout Australia habitat.