Baby koala 'thriving' with round-the-clock care after being orphaned 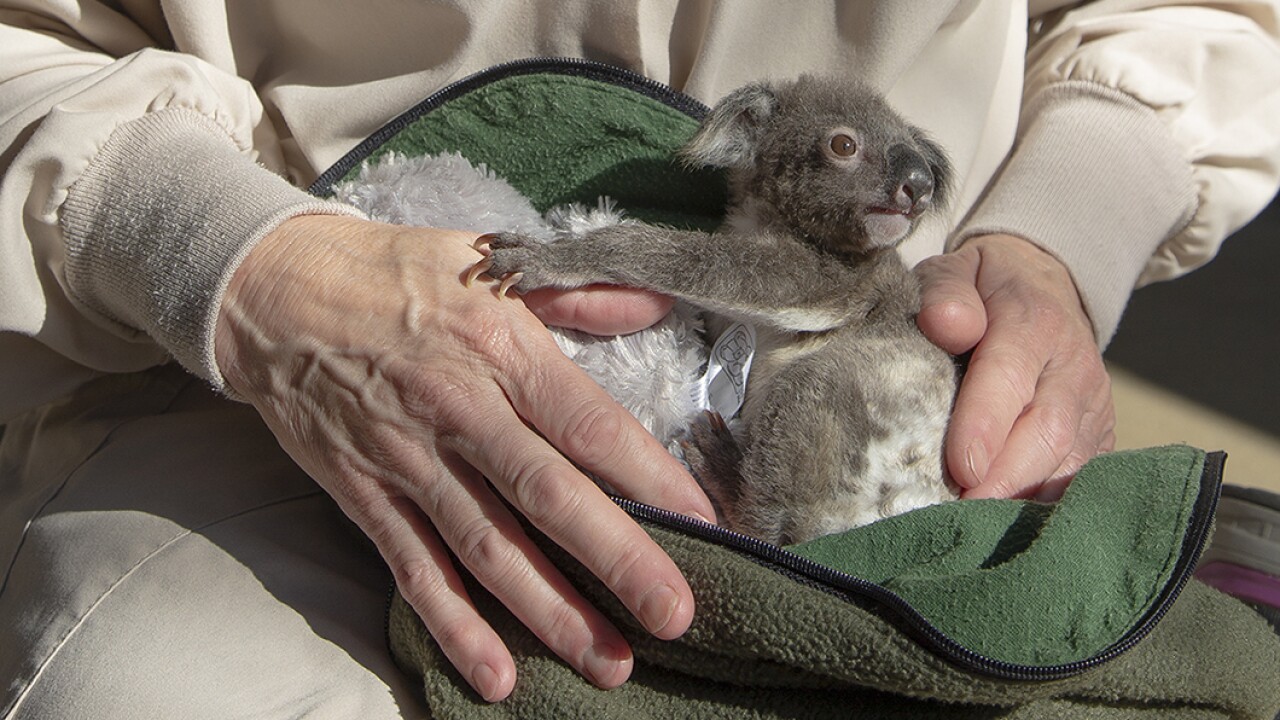 Tammy Spratt/Photo was taken on Feb. 24, 2020
Wildlife care specialists at the San Diego Zoo are providing round-the-clock specialty care to a young male koala joey who lost his mother. The joey’s mother died from cancer in mid-December, when he was about 5-and-a-half months old and was still in her pouch. To save the joey’s life, Zoo veterinarians and wildlife care specialists intervened and began feeding and caring for the little marsupial.

The koala, named Omeo -- pronounced ooh-me-ooh -- lost his mother due to cancer late last year, when he was less than six months old and still in her pouch. To save the joey's life, zoo veterinarians and wildlife care specialists intervened, feeding and caring for the little marsupial.

"Omeo has come a long way since we first started taking care of him," said Kim Weibel, senior neonatal assisted care specialist for the zoo. "In the beginning, he was so compromised and so underdeveloped, we wondered if he would make it. However, he has grown stronger, his endurance has increased, and he has nice, thick fur."

"He is starting to sample eucalyptus, so we hope he will be eating it soon; and the next big step is meeting other koalas, and learning how to socialize and climb -- doing all the great things koalas do."

Omeo requires round-the-clock care, and each day three wildlife care specialists tend to his every need. He is fed a bottle of special milk formula five times a day. Initially, Omeo was living in a faux pouch inside an incubator, with the temperature and humidity set to simulate conditions in his mother's pouch. As he has grown, he now spends more time in his exercise setting, where he is learning to explore and build muscle tone, by crawling out of the pouch and climbing up onto the back of his plush "stand-in mom."

Wildlife care specialists take him outdoors at least 10 to 20 minutes a day to provide him time in the sun and acclimate him to sights, sounds and smells of the koalas around him.

"It is important we mimic as many natural situations for Omeo as he would receive with his mother," Weibel said. "We touch him, hold him snug in his faux pouch, we encourage him to grasp onto his plush stand-in mom and we provide him eucalyptus, so he can further develop his hand-eye coordination and learn to feed himself."

When not taking a bottle, exercising or sunning himself, Omeo does what koalas do best -- he sleeps most of the day. As Omeo continues to grow stronger, his caregivers will encourage him to rely on his own instincts to eat eucalyptus, climb on branches and eventually live in his own habitat at the zoo's Australian Outback area.

The San Diego Zoo is currently closed to the public due to restrictions related to COVID-19.

The zoo has housed and cared for koalas since 1925 and has the largest colony of koalas outside of Australia. Staff at the San Diego Zoo and the San Diego Zoo Institute for Conservation Research are studying koala populations, both at the zoo and in their Australian habitats, to better understand the species' complex ecology, mating behaviors and health.