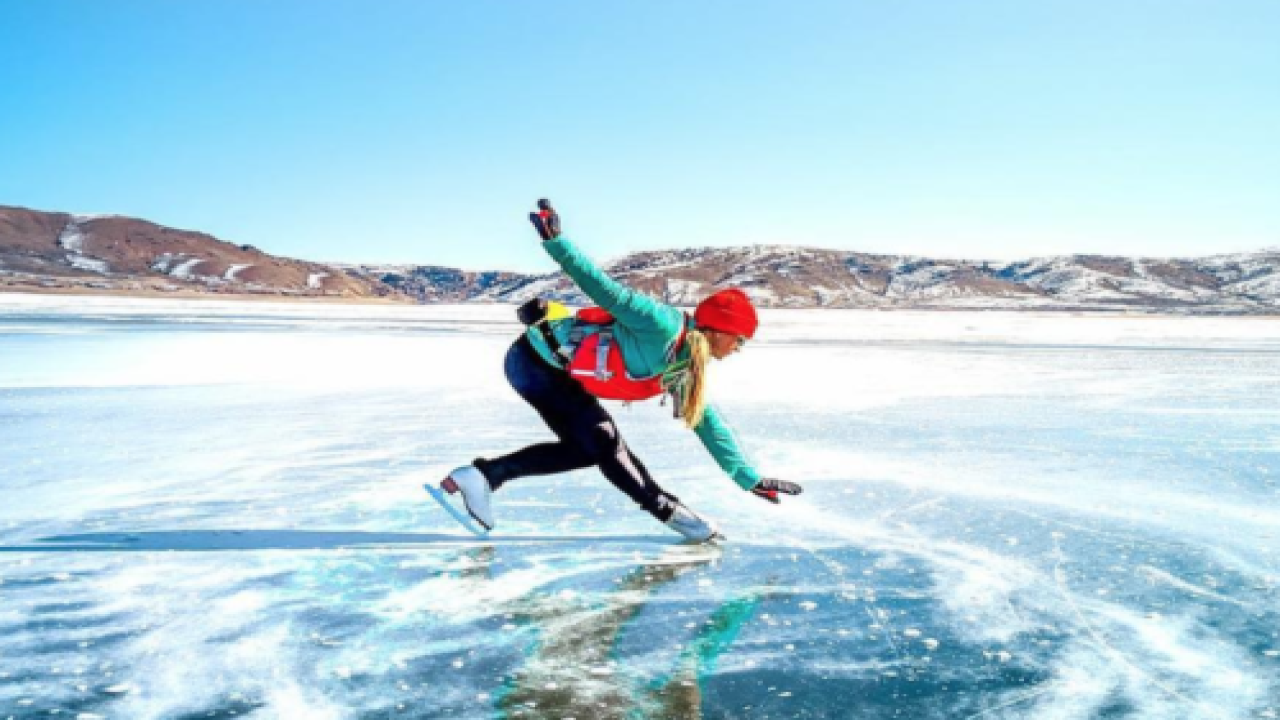 Laura Kottlowski grew up figure skating on ice rinks — the usual location for the sport. It’s so accepted in the public consciousness that leaps and lutzes are going to happen on an ice rink (with perhaps the rare foray onto a frozen pond at a city park) that it took some seriously creative thinking to elevate the sport in the way Kottlowski has.

After years of competition, including while she was in college at Penn State University, she began taking her sport out into the wilderness, to frozen rivers and to mountain lakes surrounded by the highest peaks in the world.

Kottlowski has been mixing her passion for mountaineering with figure skating for a while now, and the images that have come out of her adventures are absolutely stunning.

Check out this video she posted to her YouTube channel of her skate on Gokyo Lake, which sits at an elevation of 15,720 feet in the Mount Everest region of Nepal.

Kottlowski hauls her skates into some seriously rugged terrain. On long treks into alpine terrain, she has used spiky traction and even ice axes to climb to a lake for a skate. But it’s all worth it.

“If I see ice as smooth as glass, I just want to skate it, especially in such epic settings,” she told Elevation Outdoors.

The weather is always a factor in her mountain skates, of course. In the shot below from her Instagram, she notes she was lucky to get a window to skate on Canada’s Lake Louise.

“I was fortunate enough to snag second and third day ice on this iconic beauty before the snow rolled in,” she writes.

Gone are the glittery costumes, or the skimpy outfits that show off a figure skater’s long, lean lines. Kottlowski is kitted out in puffer coats, gloves and hats in these solo performances. When the ice is thin, she wears a PFD, or personal flotation device.

“Safety is Beautiful,” she wrote on this post from her home state of Colorado.

â ï¸Safety Is Beautifulâ ï¸ — ð· photo by: @marisajarae • I’m thankful for creativity and creative collaborations with friends like @marisajarae — She’s my main Mountaineering+Skating partner, business partner and one of few who know me best — Together we become super human (as I like to say) building on one another’s thoughts, strengths, ideas, dreams, and supporting each-other anyway we can in this wild life. This is one of my favorite shots by Marisa of our adventures and I think it tells a lot about our friendship and creative partnership: Understand our environment, prioritize safety and strategy, explore, then load on the creativity! Our motto: “Yes! and…” • Thin ice safety essentials: PFD, Ice Awls & Throw rope • • • #AlpineSkating #ThinkOutsideTheRink #WildIce #FigureSkatingLife #DedicationWorks #MKBlades #SPTeri #FigureSkating #IceSkating #IcePhoto #ChasingIce #ExploreToCreate #NeverStopExploring #asdt #camp4pix #natgeoadventure #yourshotphotographer #vice #huffpostgram #forceofnature #definefeminine #sheexplores #artofvisuals #wonderfulplaces #beautiful #adventureproject #nikewomen #patagonia #patagonia_snow #colorado_creative

In another video, Kottlowski walks up to an alpine lake and slams a rock onto it to check the ice. It’s a reminder that this particular way of ice skating poses dangers that we’re not used to seeing in the sport. (By the way, this video was shot for use with a virtual reality headset, so if you have one, you can share the experience of gliding along surrounded by mountains and forest.)

The video also shows her carving snowflake-like patterns into a snow-topped lake. It was the first time she’d been able to skate through snow like that — an experience most figure skaters just don’t have.

“Lake Abraham had three to four inches of snow on top of it, but it was smooth as glass underneath,” she told Professional Skater magazine of her expedition in the Canadian Rockies to shoot the VR video. “I could have skated for miles.”