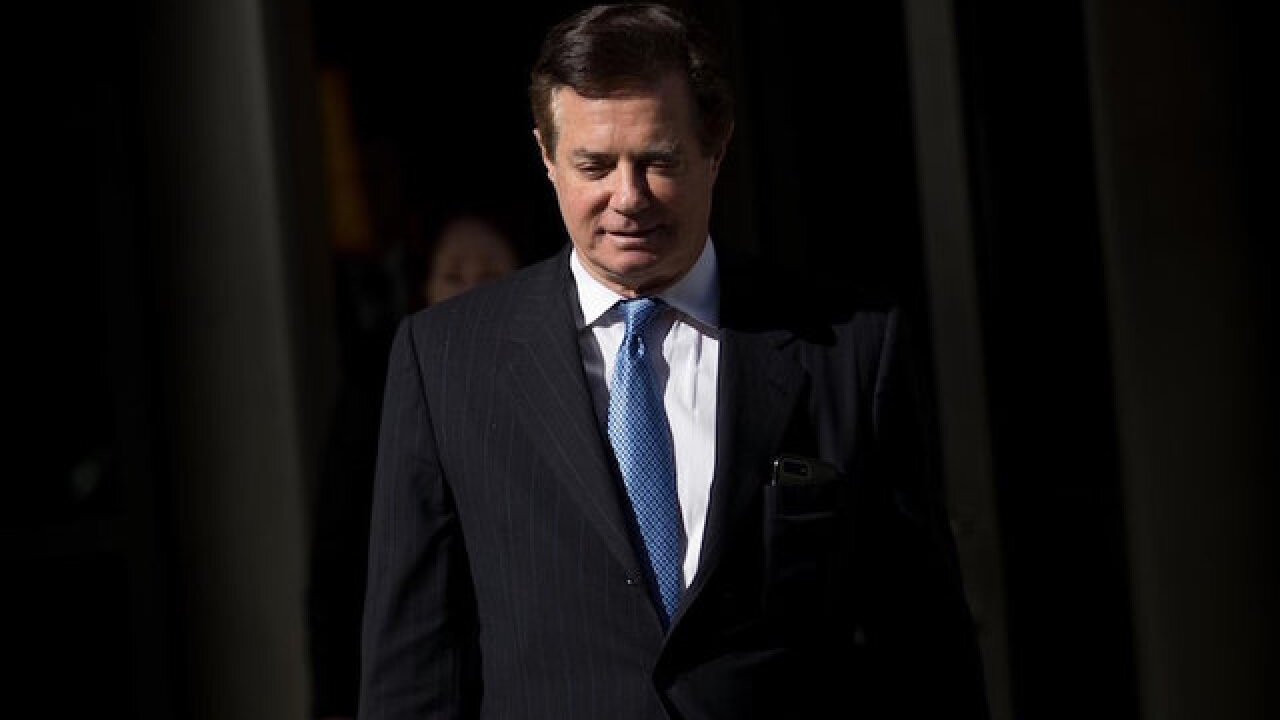 Former Trump campaign chairman Paul Manafort has agreed to cooperate with the Justice Department, including in special counsel Robert Mueller's investigation of Russian interference in the 2016 presidential election.

Prosecutor Andrew Weissmann told the judge Manafort's plea agreement is a "cooperation agreement," and other charges will be dropped at sentencing at "or at the agreement of successful cooperation." The scope of the cooperation was not immediately clear.

President Donald Trump is not mentioned in Friday's filing, nor is Manafort's role in his campaign.

In a statement to CNN after the news of Manafort's cooperation, White House press secretary Sarah Sanders said, "This had absolutely nothing to do with the President or his victorious 2016 Presidential campaign. It is totally unrelated."

Manafort had proffered information to the government already, Weissmann said in court.

Wearing a purple tie beneath his dark suit, Manafort looked glum as the hearing unfolded, standing next to his attorney, Richard Westling, with a court security officer standing immediately behind him. Manafort answered the judge's questions about himself, his plea and rights he will waive, including his right to a trial.

"I do," he said repeatedly, waiving each right.

Westling agreed in court that the mistried counts in Virginia will be dropped with Manafort's admission of guilt to all his allegations. In DC, his seven criminal counts are rewritten as two.

Prosecutors will drop the five remaining charges in DC federal court against Manafort, including money laundering, tax fraud, failing to disclose foreign bank accounts, violating federal foreign lobbying law and lying to the Department of Justice. But the court filing says Manafort admits to the actions.

Manafort had faced seven charges in Washington and faces another 10 possible charges in Virginia which had been declared in mistrial. It's still not clear what will happen to those charges in Virginia federal court. He's already been convicted on eight counts of bank and tax fraud crimes in the Virginia trial.

The White House has distanced itself from Manafort and downplayed his time leading the Trump campaign. But but last month, Trump expressed sympathy for him.

"I feel very badly for Paul Manafort and his wonderful family," the President tweeted the week of Manafort's conviction in his Virginia trial. "'Justice' took a 12 year old tax case, among other things, applied tremendous pressure on him and, unlike Michael Cohen, he refused to 'break' - make up stories in order to get a 'deal.' Such respect for a brave man!"

In their filing, prosecutors describe Manafort's scheme to take in more than $60 million from pro-Russian Ukrainians and launder that money to avoid paying taxes. He appears to admit to the allegations he faced in both Virginia federal court and DC district court, describing his use of offshore bank accounts to move the money, deceive his accountants and bookkeeper and then spend the money on lavish purchases and real estate.

He also will admit to lying to banks about his assets to gain new loans as a way to supplement his income, according to the filing.

"Manafort cheated the United States out of over $15 million in taxes," the filing states, adding that in order to commit the crimes, he relied on help from both his longtime deputy Rick Gates and the Russian Konstantin Kilimnik.

Jury selection was set to begin next week

Friday's plea deal comes just three days ahead of when jury selection for his second trial was set to begin.

As part of the run-up to the second trial, Manafort's lawyers filed hundreds of pages in court to fight prosecutors' allegations -- having brought two appeals unsuccessfully -- and his legal fees mounted to more than $1 million, according to two people familiar with his case.

Manafort, Trump's top political operative from May to August 2016, has long been considered one of the bigger fish for Muller's office. In addition to the financial and lobbying charges against Manafort, the special counsel's team has said it's investigating allegations he colluded with Russia while working for Trump.

Over the past several months, Manafort's legal options slimmed as the special counsel notched several wins against him, including sending him to jail, securing several cooperators and gaining convictions.

After his arrest in October, he was detained by the court in his Alexandria, Virginia, home for more than eight months.

Then in February, prosecutors filed new mortgage and tax fraud charges against him weeks after they discovered he was offering to secure his bail with homes tied up in his alleged mortgage fraud.

Prosecutors also gained the cooperation of his longtime associate Rick Gates, who had been indicted alongside him. Gates pleaded guilty in February to helping Manafort use bank accounts in Cyprus and Grenadines to hide millions they had made while lobbying for Ukrainian politicians. Gates testified against Manafort in the Virginia trial, saying his former boss had directed him to commit the fraud.

The special counsel's office added a second potential cooperator against Manafort in late August when another lobbyist for the Ukrainians, Sam Patten, pleaded guilty to a foreign lobbying charge. Patten worked with Manafort's Russian associate Kilimnik through 2017 and admitted in court to illegally using a straw purchaser to buy Trump inaugural tickets for an oligarch.

Kilimnik is charged as a co-defendant in Manafort's DC criminal case, for the witness tampering accusation. In previous court filings, prosecutors allege he had ties to the Russian GRU, a military intelligence agency. Kilimnik has not appeared in court, though Manafort's plea Friday admits that he committed his crimes in conspiracy with both Gates and Kilimnik.