2020 vision: Who are the Dems eyeing for next time? 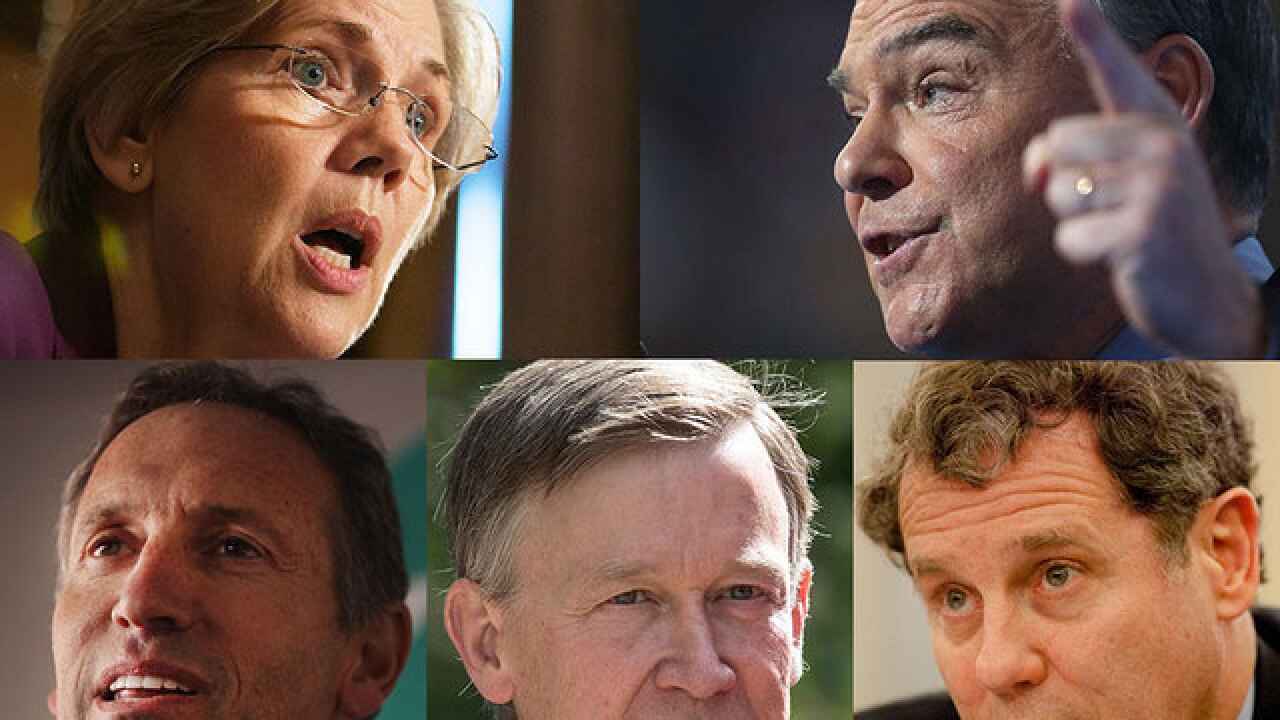 After the unpredicted, shocker elections of Barack Obama and Donald Trump, predicting whom the Democrats might nominate in 2020 is a fool’s errand. But fools must run errands, too, and the lists of “possibles” and “mentionables” are flourishing in the swamp waters of Washington.

Mother Jones magazine gets credit for publishing the first racing card, Nov. 9, 2016, the day after the election. The New York Post claims to know who is on White House political guru Steve Bannon’s watch list. Ladbrokes of London has already posted the odds.

If one could measure the daydreams of Democrats (a scary thought), the clear wish-list winner would be Michelle Obama. Polls show that and the former first lady has said many times that it will never happen.

The following list is broken into “Top Tier” and “Big Mentions.” Criteria for inclusion in the “Top Tier” are a wholly subjective mix of the volume of speculation, national name recognition, hinted intentions and political calculation.

Elizabeth Warren. The Massachusetts senator is by far the most-mentioned potential candidate.  She is the closest thing the party has right now to a national leader, though perhaps mascot is a better word.  She was the most energetic and effective surrogate for Hillary Clinton and has her visibility high. Most expect the party will move to the left in the next five years, adding to the case for Warren. On the other hand, she is too far to the left for the group of elected politicians, big donors and operatives formerly known as the Democrat Party establishment.  She will be 70 in 2020, for whatever that is worth. A lot of people in the party feel that Warren is more comfortable as a provocateur on the margins than bearing the burden of center stage.

Tim Kaine. Clinton’s pick for vice president gets cut from many lists because some consider him boring and too centrist for the party’s current path. However, he is one of the very few Democrats on the planet with deep experience, national road-testing and national name recognition. If the ancient laws of political gravity still applied, Kaine would probably be at the top of the Top Tier list. There is a good case to be made that he should be.

Howard Schultz. An outsider/businessperson candidate is likely to have a better reception in Democratic primaries than ever before and no one fits the bill like the founder of Starbucks, who recently stepped down as CEO — hint, hint.  There has been talk around Schultz for a long time. Though he isn’t a reckless orator and mischief-maker like Trump, his story is much better; he truly is self-made and he indisputably has a boatload of money. He has been engaged with political causes and is probably in tune with the liberal base of the party.

John Hickenlooper.  Despite the funny name, the governor of Colorado is basically unknown nationally.  He is a popular governor of a purple state with a kind of plain English, semi-maverick unscripted style — a rare skill among party leaders these days. He has never dwelled in the Washington swamp.  His intentions are as unknown as his national appeal.

Sherrod Brown.  The Ohioan is sort of a Senate version of Hickenlooper (or vice versa). His boring name is as unknown as Hickenlooper’s memorable one.  Brown is known as a frisky campaigner and a feisty Trump critic who connects with the less educated, white working class voters whom Trump lured. Brown is solidly of Democratic left, however, and could easily be their flag-bearer in the primaries if Warren doesn’t run.

Mark Cuban.  The billionaire owner of the Dallas Mavericks has been taunting Trump more effectively than almost anyone for the past year. He is every bit as irreverent and provocative as Trump, and just as inexperienced in statecraft and certainly richer. He has hinted about running many times but he is also quite literally a maverick.

Cory Booker.  The senator from New Jersey has many elements of the full package: young, articulate and experienced, with a dash of celebrity.  The inside line has long been that Booker won’t make a White House bid because of run-off from messy New Jersey politics and a lack of fire in the belly for a grueling campaign.

Kirsten Gillibrand.  Hillary Clinton’s replacement in the Senate has gained a big reputation in Washington but not on the national level.  Along with Sherrod Brown, Gillibrand is one of many senators on the long-list of mentionables, though she lacks obvious allure for potential “Trump Democrats.”

Andrew Cuomo. New York’s veteran governor is left off presidential wannabe lists more often than he is included.  That is mostly because of a batch of home-state ethics issues as well as his pugnacious, often politically tone-deaf swagger.  But that could be just the ticket in a Trump or post-Trump election.  Cuomo is, after all, one of the few Democrats under 70 with some national name ID and a hint of pizazz.

There is a slew of mini-mentions just as plausible as many of the names above. That is not a tribute to the Democrats breeding operations. These are some of the names on the longer lists:  Senators Chris Murphy from Connecticut, Amy Klobuchar from Minnesota and Kamala Harris from California; Governor Jay Inslee of Washington; Facebook COO Sheryl Sandberg.

Remember, you might possibly have read it here first.