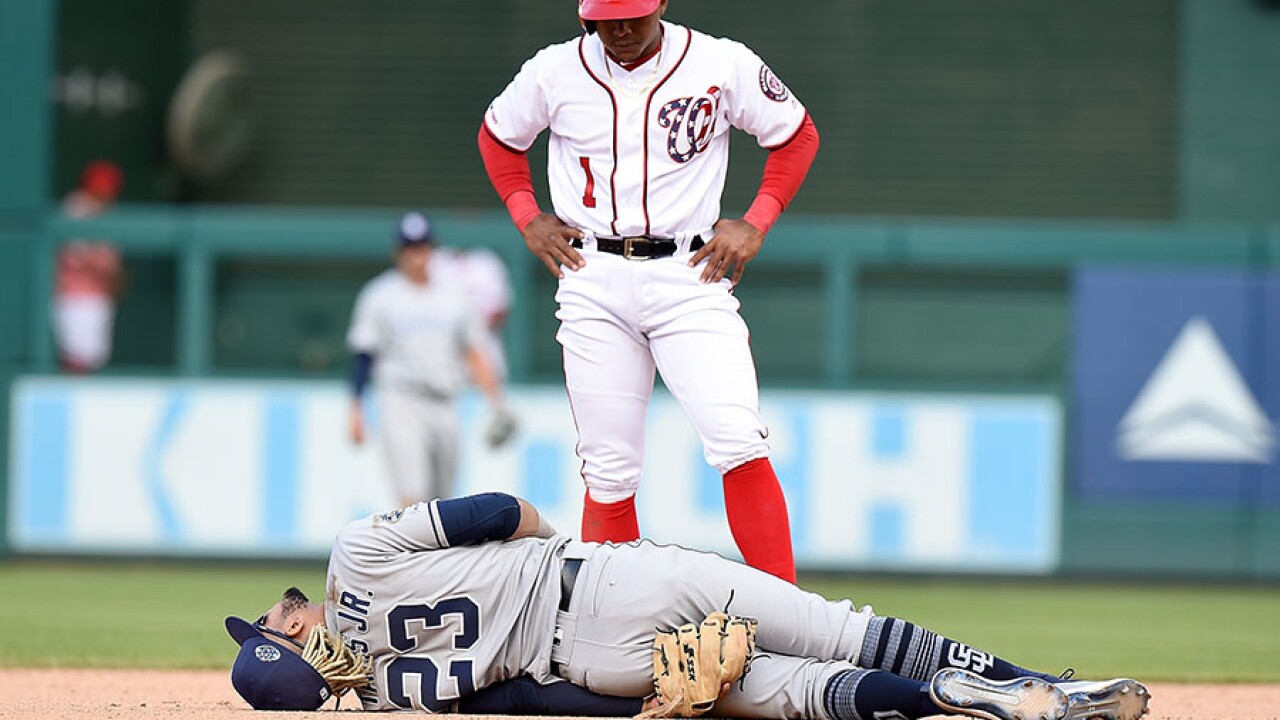 WASHINGTON (AP) - Matt Adams homered leading off the 11th inning, and the Washington Nationals beat the Padres 7-6 on Sunday, avoiding their first series sweep at home against San Diego since 2008.

Adams, who was hitless in his first five at-bats, hit a 1-1 fastball from Matt Wisler (1-1) deep into the stands in right field as Washington salvaged the finale of the three-game series. It was Adams' third career walk-off homer.

San Diego shortstop Fernando Tatis Jr. left in the 10th inning after he did an awkward-looking split while trying to stretch for a throw at second base. Tatis was unable to keep his foot on the bag on the play. He moved around gingerly while umpires reviewed the play and could not continue.

Carter Kieboom, Victor Robles and Juan Soto all homered for Washington. According to the Elias Sports Bureau, it was the first time three teammates under the age of 22 homered in the same game. Soto is 20, while Kieboom and Robles are 21.

Justin Miller (1-0) pitched a scoreless 11th. Washington, which entered with the majors' worst relief ERA at 7.34, got eight scoreless innings from its bullpen, including four from Erick Fedde, who was recalled from Double-A Harrisburg earlier Sunday.

San Diego scored a run in both the first and second innings, then produced a four-run third against Jeremy Hellickson, highlighted by Eric Hosmer's three-run homer.

The Nationals climbed out the 6-0 hole largely on the strength of home runs. Soto connected for a three-run shot in the third, and Kurt Suzuki added an RBI single later in the inning. Robles led off the fourth with a homer against starter Joey Lucchesi, and Kieboom looped a solo shot inside the foul pole in left off reliever Adam Warren in the fifth to tie it.