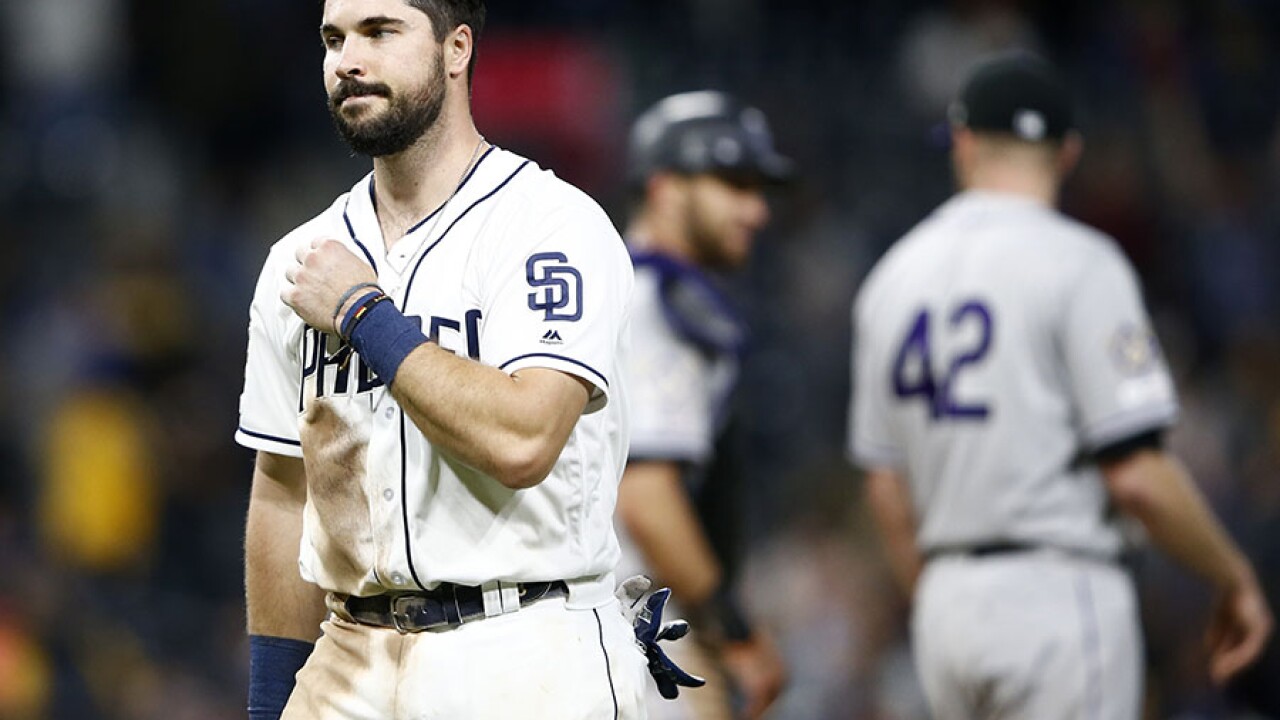 Sean M. Haffey/Getty Images
SAN DIEGO, CALIFORNIA - APRIL 15: Austin Hedges #18 of the San Diego Padres walks off the field after being defeated by the Colorado Rockies 5-2 in a game at PETCO Park on April 15, 2019 in San Diego, California. All players are wearing the number 42 in honor of Jackie Robinson Day. (Photo by Sean M. Haffey/Getty Images)

SAN DIEGO (AP) -- Ian Desmond homered, doubled and drove in three, and Nolan Arenado also homered to back Antonio Senzatela in his season debut and lead the Colorado Rockies to a 5-2 victory against the San Diego Padres on Monday night.

The Padres came in with the NL's best record before losing their second straight game. The Rockies, who came in tied with Miami for the league's worst record, won consecutive games for just the second time this season.

Desmond, who came in hitting .140, hit a two-run double in the second inning and homered to left in the seventh, his first.

Arenado homered to left-center with one out in the sixth, his second. Both homers were off lefty Joey Lucchesi (2-2).

Senzatela (1-0) was recalled from a rehab assignment and reinstated earlier Monday. He began the season on the injured list with an infected blister on his right heel. He held San Diego to one run and six hits in 6 2/3 innings while striking out four and walking one.

His only mistake was allowing Franmil Reyes' opposite-field homer leading off the fourth, his fourth.

Wade Davis got the final out for his first save. He walked Luis Urias to put runners on first and second before striking out pinch-hitter Ian Kinsler to end it.

Lucchesi allowed five runs and seven hits as he pitched seven innings for the first time in his two-year career. He struck out four and walked two.

Wil Myers hit his 100th career homer leading off the ninth for the Padres, off Scott Oberg. It was his fourth this season.