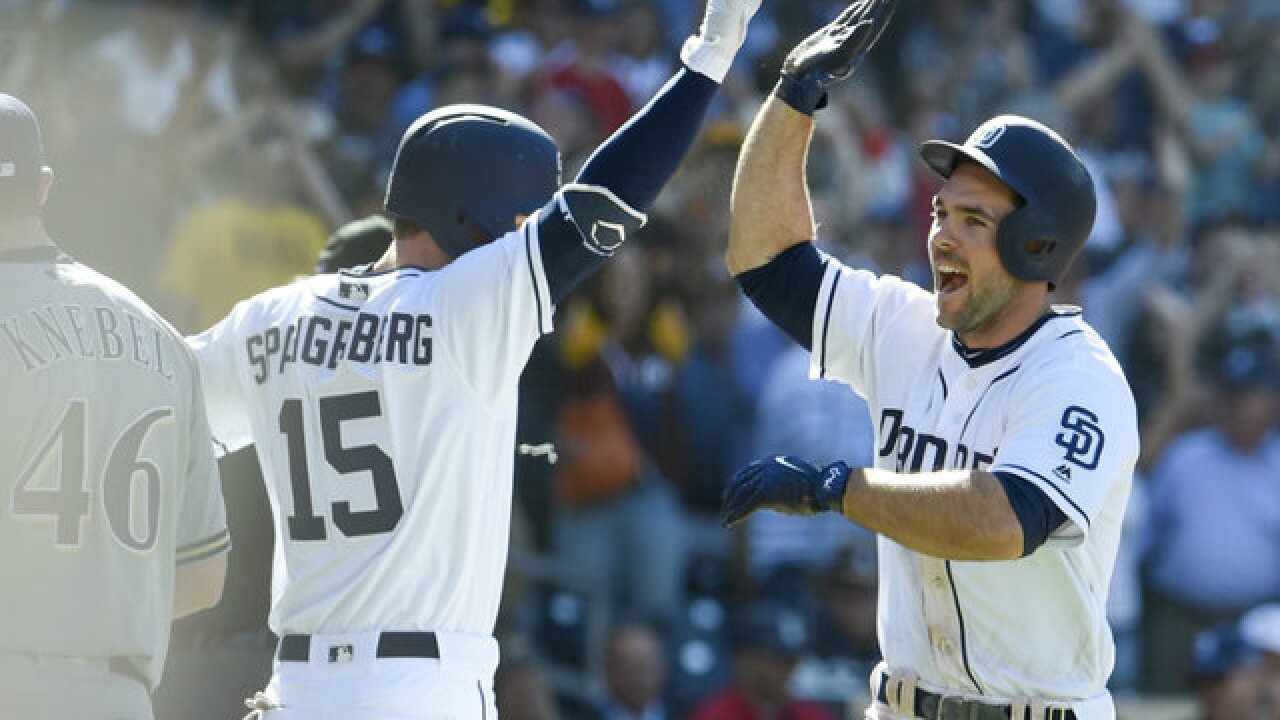 Copyright Getty Images
Denis Poroy
Matt Szczur #23 of the San Diego Padres is congratulated by Cory Spangenberg #15 after scoring during the ninth inning on Opening Day against the Milwaukee Brewers at PETCO Park on March 29, 2018 in San Diego, California.

SAN DIEGO (AP) - Orlando Arcia singled in Ji-Man Choi with two outs in the 12th inning to lift the Milwaukee Brewers over the San Diego Padres 2-1 on opening day Thursday.

Arcia's hit came off sidearmer Adam Cimber (0-1), who was making his big league debut. After getting Manny Pina to hit into a double play, Cimber allowed Choi's pinch-hit double before Arcia's go-ahead RBI.

Jeremy Jeffress (1-0) pitched two innings for the win. Jacob Barnes struck out the side in the 12th for the save.

The Padres had the bases loaded with one out in the 11th, with newcomer Eric Hosmer poised to score the winning run, but Chase Headley, back with San Diego after 3 1/2 seasons with the New York Yankees, grounded into a double play.

The Brewers were one out away from winning 1-0 on a four-hitter when Freddy Galvis, acquired in a trade with Philadelphia, singled to right off Corey Knebel, a first-time All-Star last year, to bring in Carlos Asuaje and send it into extra innings. Asuaje singled with one out and stole second with two outs.

Milwaukee's Chase Anderson allowed one hit in six innings in his first opening day start. He had six strikeouts and three walks.

The right-hander also singled to center off Clayton Richard with two outs in the third, advanced on Lorenzo Cain's single to left and scored on Christian Yelich's single to left. A late, awkward slide left the pitcher shaken up momentarily, but he stayed in the game.

The Padres flashed some nice defense. Galvis, San Diego's fifth different starting shortstop in five opening days, made a terrific play in the second when he fielded Pina's hard one-hopper as he went to the ground and flipped the ball to second baseman Asuaje to start an inning-ending double play. Headley, the third baseman, made a nice play on Ryan Braun's hard grounder to start an inning-ending double play in the first.

Hosmer, signed to a $144 million, eight-year contract early in spring training, went 0 for 4 with a walk and two strikeouts in his Padres debut.