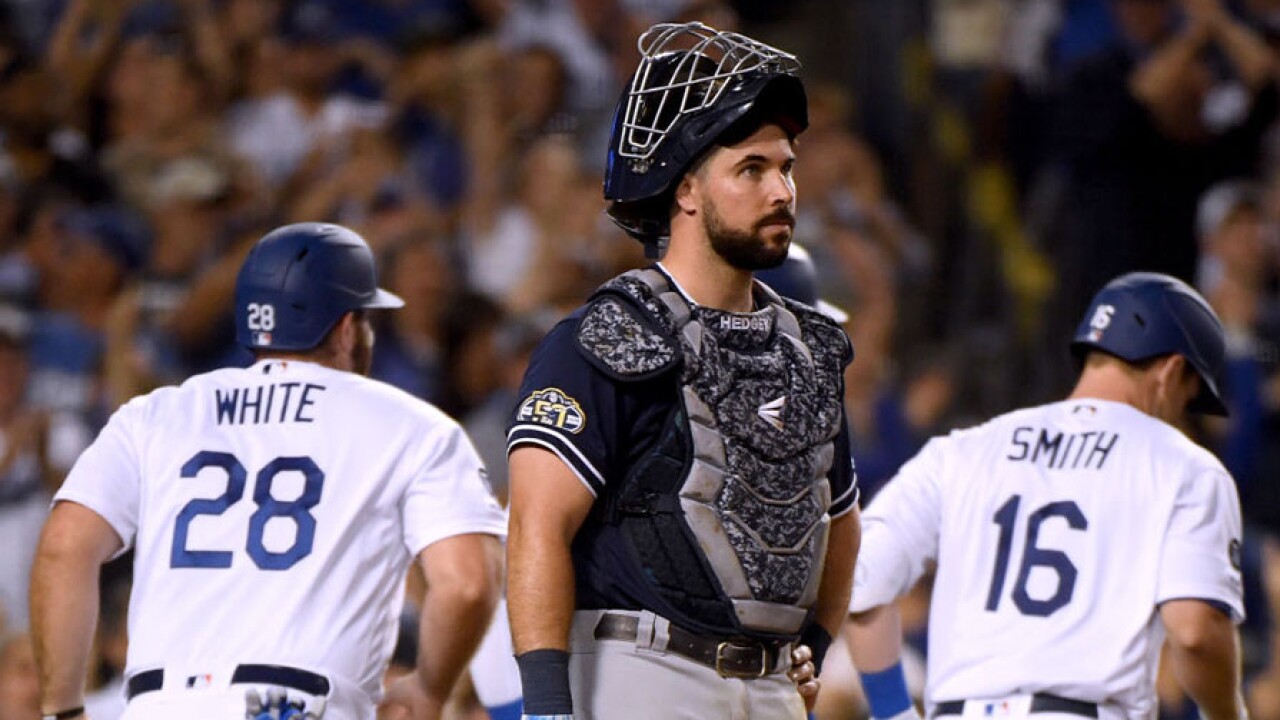 Harry How/Getty Images
LOS ANGELES, CALIFORNIA - AUGUST 01: Austin Hedges #18 of the San Diego Padres reacts after a grand slam homerun from Will Smith #16 of the Los Angeles Dodgers, for a 5-2 Dodger lead, during the sixth inning at Dodger Stadium on August 01, 2019 in Los Angeles, California. (Photo by Harry How/Getty Images)

Cody Bellinger hit his first homer in two weeks and added a two-run double for the major league-leading Dodgers (72-39), who opened a 10-game homestand with their third straight win.

Matt Beaty had an RBI double as Los Angeles surged into August by taking a 16-game lead over San Francisco in the NL West.

Hunter Renfroe hit his 30th homer and Manny Machado had an RBI single for the Padres, who opened August with another loss after going 8-16 in July.

Kershaw (10-2) is third in Dodgers history and first among lefties after passing Koufax while recording five strikeouts, giving him 2,397 in a career spent entirely in blue. Kershaw struggled with five walks and gave up exactly one hit in every inning, but repeatedly escaped trouble to remain unbeaten since June.

He got another big boost from Smith, the 24-year-old catcher with the Hollywood name who has adapted to the big leagues without a hitch.

Smith connected to deep center off Padres reliever Trey Wingenter in the sixth, taking a curtain call after delivering the Dodgers' fifth grand slam of the season.

In just 14 major league games, Smith has six homers -- including two walk-off blasts in June -- and 19 RBIs. He also has 11 extra-base hits after an eighth-inning double.

Smith was sent back to Triple-A for a month after his earlier heroics, but returned to the Dodgers last week with a six-RBI performance at Washington, again in support of Kershaw.

Kershaw went at least six innings for the 19th time in 19 starts this season, earning his 16th quality start. While teammates Hyun-Jin Ryu and Walker Buehler have stolen some of Kershaw's usual spotlight this summer, the veteran still has racked up 10 wins for the ninth time in the last 10 seasons.

Renfroe led off the second with a solo shot, securing his first 30-homer season with two months to spare.

Bellinger answered with a 425-foot shot into right for his 35th homer on Lucchesi's first pitch of the bottom half. The NL leader in wins above replacement hadn't homered since July 16, matching his longest homer drought of the season at 12 games.