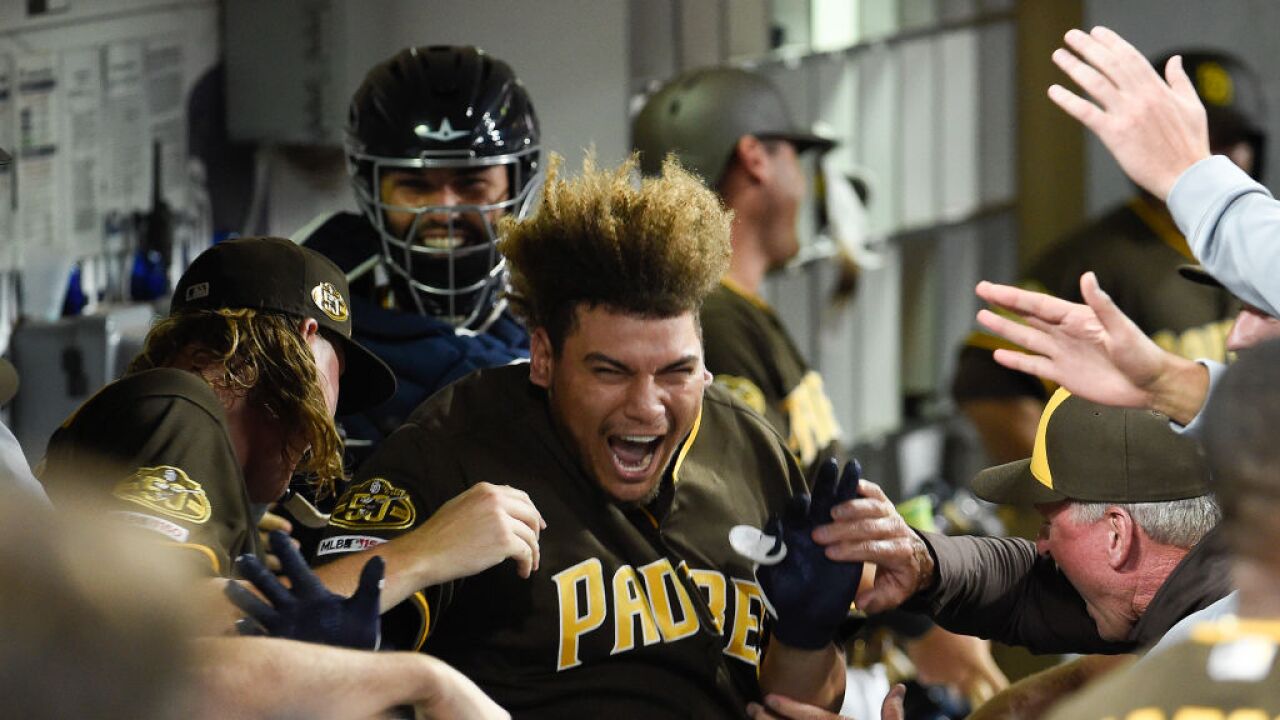 Players and fans alike held their breath until Tatis Jr. slowly stood up, was checked by a trainer and stayed in the game.

"It made my heart stop," manager Andy Green said after Tatis had a two-run double, stole two bases and made another nice defensive play in the Padres' 7-1 victory against the Colorado Rockies on Friday night. "He plays hard. That was the first unathletic thing I've seen Fernando Tatis do since he's been here. That was an awkward slide. We're glad he's OK."

Tatis, 20, laughed at Green's comment about the unathletic move.

"My arm got a little bit stuck and I just rolled with it," he said. "I kind of freaked out at the beginning. I didn't want to move but then I started moving and found out it was good. I'm good to go."

Green said he knew Tatis was OK when he took some aggressive swings in his final at-bat, when he struck out swinging.

"I had a feeling he was going to be OK," Green said.

Tatis hit a two-run double to extend his hitting streak to a career-best 13 games and fellow rookie Cal Quantrill pitched seven strong innings. Yet another rookie, Josh Naylor, had a pinch-hit, three-run homer.

Tatis is aggressive on the basepaths. He broke his left thumb sliding headfirst in the minors last season.

"Anytime he slides you hold your breath for a second," Quantrill said. "But it's part of his game and he has to continue doing it because it's what makes him so dynamic. But yeah, you better believe the entire bench was concerned, like, 'Get up, get up quick, we need you.' "

Quantrill (5-3) held the Rockies to five hits in a seven scoreless innings, the longest he's gone in 11 big league starts. He struck out five and walked none.

Tatis and Quantrill are the sons of former major leaguers.

"It's rare where you have a pretty good outing there and it's like you're like the fourth or fifth best rookie on the team, but that's OK," Quantrill said. "I'm never going to complain about those guys putting up runs for me and making great plays. And obviously Naylor coming in and doing something special in a pinch-hit situation is good to see. Anytime we can give Kirby (Yates) a break, we love to do that," he added, referring to the All-Star closer.

Tatis doubled to left-center off Kyle Freeland (3-10) with one out in the third to bring in Manuel Margot, who had drawn a leadoff walk, and Luis Urias, who followed with a single. He stole second and third in the seventh inning, giving him 16. He was shaken up sliding headfirst into third but stayed in the game.

Tatis also made a nice play at shortstop, fielding Nolan Arenado's chopper and spinning 360 degrees before throwing him out.

Naylor homered off Scott Oberg in the eighth, his fifth.

Wil Myers hit an RBI single in the fifth and Urias brought in a run with a grounder in the eighth.

Quantrill "threw the ball well," Daniel Murphy said. "He had a pretty good runner going tonight and seemed like he was able to get off our barrel."

Manager Bud Black said the Rockies "just couldn't get anything going" against Quantrill, "and when we did, we had a guy or two in scoring position and we couldn't get that knock to get us closer."

"I think we did a good job of hitting spots and getting weak contact," Freeland said. "They put some at-bats together after a walk or a weak hit and scored some runs."