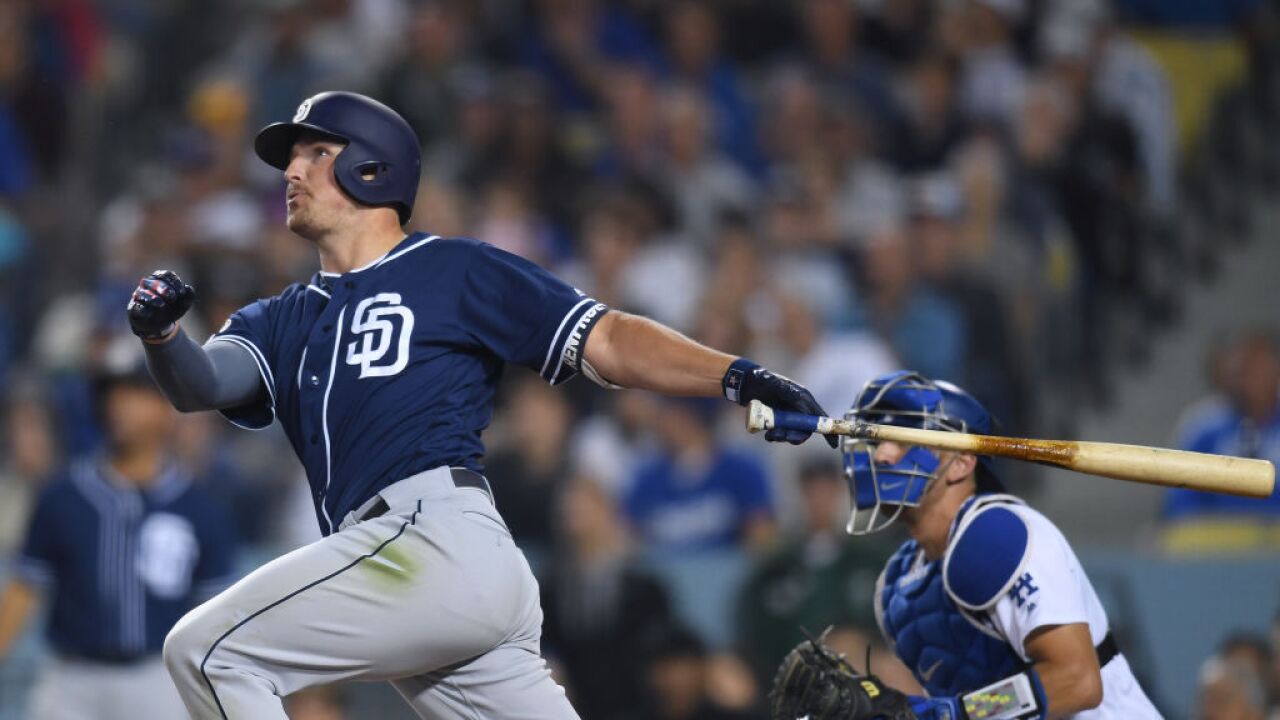 LOS ANGELES (AP) — Eric Lauer was on the Dodger Stadium mound when he heard the crowd suddenly get loud and wondered why.

Lauer kept pitching, throwing two strikes in the midst of a strong earthquake that rattled the stadium during San Diego's 3-2 victory over the Los Angeles Dodgers on Friday night.

"Not many people can say they threw a strike during an earthquake," Lauer said. "My ball, my pitch, started an earthquake."

Early magnitude estimates from the U.S. Geological Survey wavered between 6.9 and 7.1.

Lauer didn't realize it until he returned to the dugout and his teammates asked if he felt it.

"I was locked in no matter what," he said. "When you really focus in there's not a lot that can distract you."

Kershaw was in the tunnel between the dugout and clubhouse during the quake and said he didn't feel it.

"We really couldn't feel it as much on the field as the people in the upper deck, so there was a lot of commotion going on," said Dodgers manager Dave Roberts, who was quickly informed of the cause. "Dodger Stadium held up."

Lauer was facing Enriquè Hernàndez when the quake struck in the fourth. Lauer's first three pitches of the at-bat — including two strikes — came during the shaking that unnerved some fans in the crowd of 49,790 enough to move from their seats in the upper reserve level and caused the press box to lurch for several seconds.

The TV broadcast was marred by the camera bouncing up and down.

Hearing the crowd stirring, Hernàndez stepped out of the batter's box after Lauer's third pitch. He eventually flied out to left field to end the inning.

"He didn't feel it, either, so he was kind of wondering what all the ruckus was about," Roberts said. "I was hoping that he would hit the ball out of the ballpark, add to the commotion."

Padres manager Andy Green said he felt the quake and noticed one of the foul poles swaying.

"I said to (coach) Rod (Barajas) that I'd love for Kikè Hernàndez to hit a ball right down the line where the foul pole sways in and the ball swings just foul based on that," he said.

Nothing was said by the public address announcer regarding the quake.

"People were freaking out," said Daniel Earle, a 52-year-old fan sitting with his wife in the reserve level. "I'm surprised my arm is still here. She was squeezing into it so hard."

Jamie Taralunga of Ann Arbor, Michigan, landed in Los Angeles on Thursday, just after a 6.4-magnitude quake. The latest one unnerved her.

"It was pretty crazy," she said. "I just heard a bunch of screaming all of a sudden and everyone's shaking back and forth. Swaying almost like a boat."

Dodgers closer Kenley Jansen was relaxing on a couch in the clubhouse when the shaking began.

"I thought I was tripping for a second," he said. "It's not fun. You get worried. There's 50,000 people in the stands, the stadium is shaking, and there's nowhere to go."

"I kind of felt the railing and I was like, we are moving a little bit," the rookie said. "We could be scared but I can't tell the earth to stop moving."

Verdugo said teammate Chris Taylor was "all fired up" and came running out from the batting cage after seeing the jarring motion on the TV broadcast.

Hunter Renfroe matched a career high with his 26th homer, connecting off Yimi Garcia (1-3) with two outs in the eighth to snap a 2-all tie.

Craig Stammen (6-4) got the victory in relief. Kirby Yates earned his 28th save.

The Dodgers tied it at 2 in the sixth. Newly named All-Star Max Muncy grounded into a fielder's choice to first base that scored Verdugo, who had a leadoff double and went to third on Lauer's wild pitch.

The Padres took a 2-0 lead in the third.

Eric Hosmer's RBI double to deep center scored Lauer, who reached on catcher's interference by Austin Barnes. Manny Machado, the former Dodger who has been booed heavily in the first two games of the series, followed with a fielder's choice groundout to third that scored Fernando Tatis Jr., who singled.

Lauer allowed two runs — one earned — and four hits in six innings. He struck out six and walked one.

Kershaw gave up two runs — one earned — and five hits. He struck out nine and walked one.