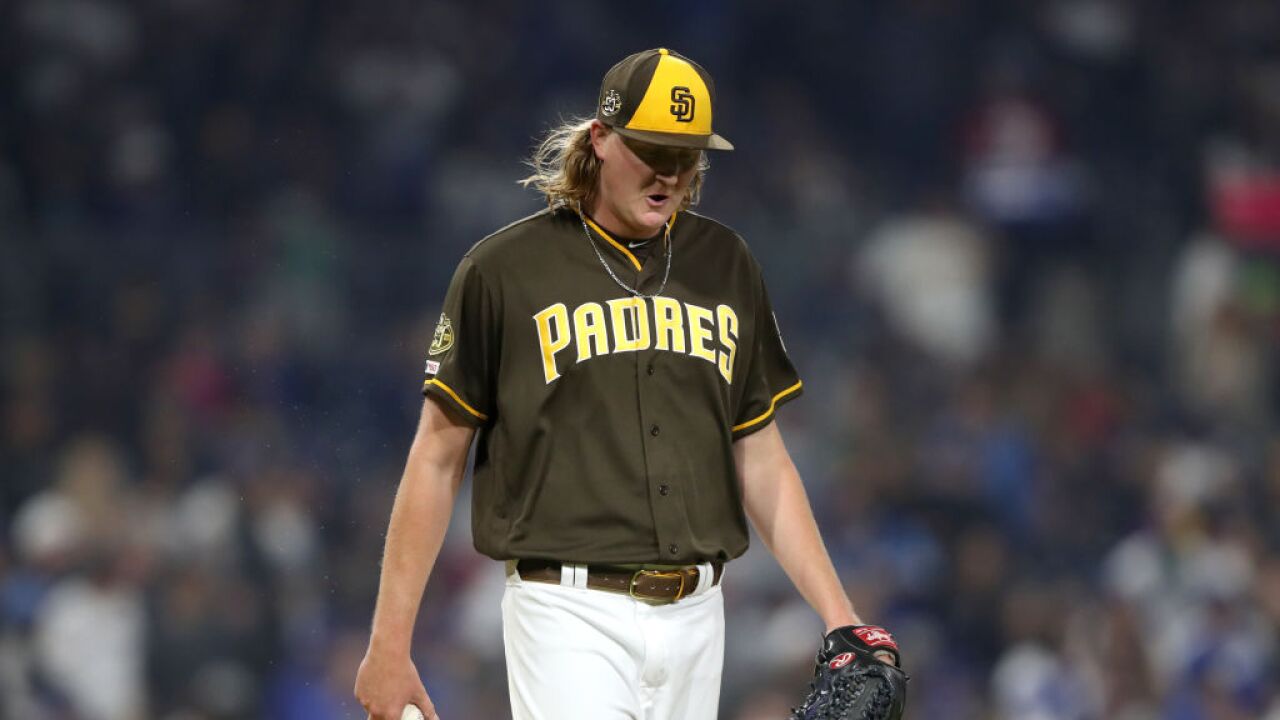 SAN DIEGO (AP) — Clayton Kershaw gave up a monster two-run homer to former teammate Manny Machado and then a solo shot to Ian Kinsler that put him behind 3-0 after three innings against the Padres.

San Diego threatened to add on in the fourth, but the Los Angeles ace got Wil Myers to ground into a double play and the Dodgers rallied to beat the Padres 4-3 Friday night.

Austin Barnes hit a tying home run leading off the seventh and then scored the go-ahead run on Max Muncy's single with one out in the ninth for the NL West-leading Dodgers.

"Just one of those nights," Kershaw said. "They scored early and I wasn't making a lot of pitches. With our team you've just got to keep us in it as long as you possibly can and you're going to have nights like that. Fortunate to keep it to three and our team did a great job of fighting and found an opening and that's what good teams do and it felt good to do it tonight."

Muncy's hit off Kirby Yates (0-1) went off the edge of the glove of diving first baseman Eric Hosmer to bring in Barnes, who was aboard on a leadoff double.

Scott Alexander (2-1) got the final out of the eighth for the win. Kenley Jansen earned his 11th save by striking out the side after Hosmer reached on an error by shortstop Corey Seager.

The Padres took a 3-0 lead against Kershaw after three innings. Machado hit a 437-foot, two-run homer in his first career plate appearance against Kershaw, and Ian Kinsler went deep off the left-hander leading off the third.

It was the first game between the teams since Machado left the Dodgers as a free agent after helping them reach the World Series and signing a $300 million, 10-year contract with the Padres. San Diego entered Friday's play in third place in the division, 1½ games behind the Dodgers.

Machado drove a 3-2 pitch from Kershaw almost to the top of the second deck in left field with one out in the first and Franmil Reyes aboard on a single. The monster homer silenced the Dodgers fans who booed Machado and energized Padres fans in the sellout crowd of 44,425 that was about evenly split. It was Machado's sixth.

"Looking for a good pitch to hit and I got one," Machado said.

"We had him on the ropes there, fourth inning, first and second, Wil grounded into a double play. He had a good pitch to hit right there and wasn't able to do it. Took an aggressive pass on it. I think that's probably the one time we had him on his heels. He kind of regained his composure. If we deliver that blow, it changes the complexion of the game.

Kershaw was in danger of losing to the Padres for the first time since 2013 before the Dodgers rallied to get him off the hook.

Chris Taylor homered leading off the third against left-hander Eric Lauer, who then loaded the bases with no outs in the sixth and made way for Brad Wieck. Seager hit a sacrifice fly before Wieck struck out Taylor and got Alex Verdugo to ground out.

Barnes tied it with a homer leading off the seventh against Trey Wingenter, his fourth.

"Every team can get better at something, but I think for the most part we're doing a great job," Kershaw said. "I love our fight. Our team doesn't really give in, doesn't give away at bats, pitchers don't give in, good or bad keep going. That's a sign of a good team, sign of an experienced team that knows it can come back from stuff."

Manager Dave Roberts said it was "Just toughness" that got the Dodgers through.

"There was just no panic; get behind early, but we just kept putting at-bats together," Roberts said. "I think that Clayton didn't have his breaking ball, his slider early, but found a way to give us six innings and keep us in the ballgame."

Kershaw allowed three runs and six hits in six innings, struck out six and walked one.

"We had him on the ropes there, fourth inning, first and second, Wil grounded into a double play," Padres manager Andy Green said. "He had a good pitch to hit right there and wasn't able to do it. I think that's probably the one time we had him on his heels. He kind of regained his composure. If we deliver that blow it changes the complexion of the game."