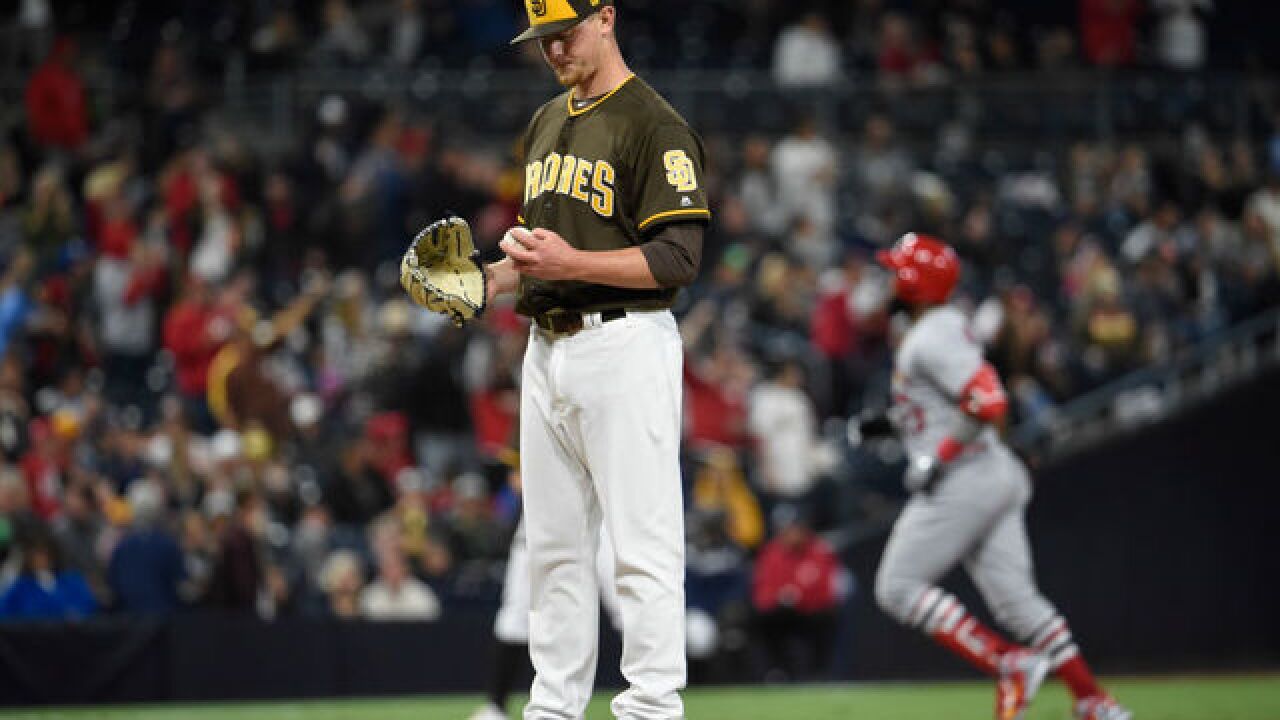 Copyright Getty Images
Denis Poroy
<p>SAN DIEGO, CA - MAY 11: Eric Lauer #46 of the San Diego Padres stands on the mound after giving up a solo home run to Marcell Ozuna #23 of the St. Louis Cardinals during the third inning of a baseball game at PETCO Park on May 11, 2018 in San Diego, California. (Photo by Denis Poroy/Getty Images)</p>

SAN DIEGO (AP) — Jedd Gyorko likes playing at Petco Park even though it hasn't been his home ballpark for three seasons.

Gyorko homered and improved his batting average to .525 in 12 games against his old team, and Paul DeJong, Marcell Ozuna, Harrison Bader and Tommy Pham also went deep to lead the St. Louis Cardinals to a 9-5 victory against the San Diego Padres on Friday night.

"I've always felt like I've seen the ball decently here and I've had some seasons that I wasn't very good here, either. I guess I'm comfortable here," said Gyorko, who finished with three hits.

Gyorko is 21 for 40 with eight homers and 17 RBIs against his former team.

Gyorko was a second-round draft pick of the Padres in 2010 and played with San Diego from 2013 until being traded to St. Louis in December 2015. The Padres gave him a $35 million contract in April 2014, just 13 games into his second full big league season.

"I think you try to go about it the same way all the time," manager Mike Matheny said. "It seems to happen a lot. I don't know if there's a great explanation to it except the people that you know, the place that you're accustomed to being, sometimes you hear a few boos, that might take it to another level. But Jedd's a good hitter."

DeJong drove in a career-high four runs for the Cardinals, who scored all but one run on the homers. Four of the five long balls were off Padres rookie lefty Eric Lauer (1-2), who lasted only 2 1/3 innings.

DeJong hit a three-run shot to left in the second, with Ozuna and Gyorko having reached on singles. It was his eighth.

Bader homered leading off the third, his second, and Ozuna and Gyorko hit consecutive shots with one out to chase Lauer. It was Ozuna's third and Gyorko's fourth.

Bryan Mitchell, demoted to the bullpen after going winless in seven starts, allowed Pham's two-run homer in the sixth that gave St. Louis a 9-0 lead. It was his seventh.

The only Cardinals run that didn't come via homer was on DeJong's single in the fifth, which scored Ozuna. Ozuna scored three runs.

"I thought when he had to make a really good pitch he made a very good pitch," Matheny said. "He knows what he's doing and I think he used a little of everything tonight."

Lauer, making his fourth big league start, allowed six runs and seven hits, with one strikeout and one walk.

"It was just everything was middle," manager Andy Green said. "He just wasn't executing arm-side. Everything kind of funneled back toward right-handed hitters. They have guys who hit lefties very well. Pitch variation was pretty much 85 to 89 and it becomes relatively easy for those guys. It's something he's got to learn from."

Mitchell pitched 5 2-3 innings, taking some stress off the bullpen.

San Diego's Travis Jankowski homered in the ninth, his first. A.J. Ellis hit an RBI double in the sixth, while Franchy Cordero had an RBI triple and Jose Pirela a run-scoring double in the seventh.

Cardinals: Placed LHP Tyler Lyons on the 10-day disabled list with a mid-back strain, retroactive to Wednesday, and activated LHP Brett Cecil from the 10-day DL.