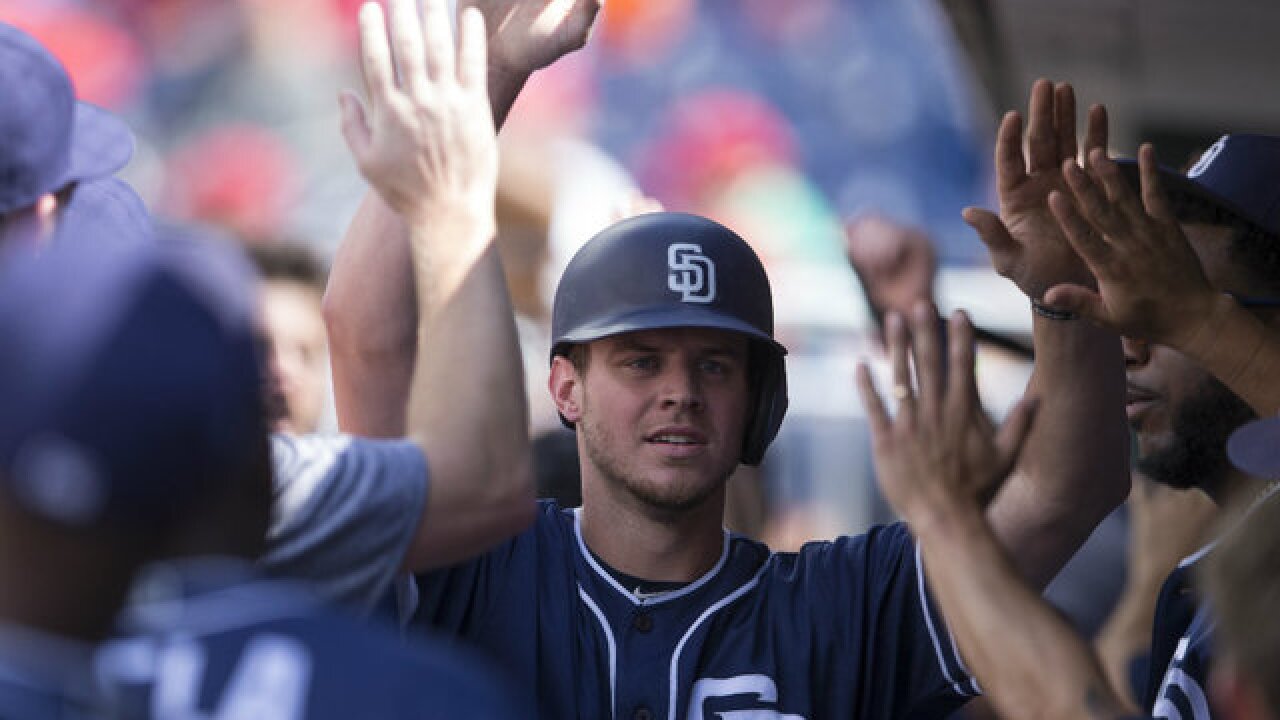 Copyright Getty Images
Mitchell Leff
Wil Myers #4 of the San Diego Padres high fives his teammates in the dugout after hitting a two run home run in the top of the ninth inning against the Philadelphia Phillies at Citizens Bank Park on July 22, 2018 in Philadelphia, Pennsylvania. The Padres defeated the Phillies 10-2.

In the opener, Freddy Galvis had his second straight three-hit game back in Philadelphia and Tyson Ross ended a seven-start winless streak in the Padres' 10-2 victory.

Philadelphia widened its NL East lead to one game over second-place Atlanta.

Velasquez (6-8) struck out seven and walked one, pitching no-hit ball until A.J. Ellis singled off the left-field wall starting the sixth. In his only previous start against the Padres, he struck out 16 and walked none in a three-hit shutout on April 14, 2016.

Odubel Herrera hit a solo homer in the fourth against Luis Perdomo (1-5). After a pair of batters reached against Perdomo in the seventh, Carlos Santana hit a bloop run-scoring single against Phil Maton and Rhys Hoskins added his second homer of the day and 16th this season, a three-run drive.

Nick Williams had three hits in the nightcap.

Galvis was 6 for 11 with four RBIs in the series. He spent six seasons with the Phillies before he was dealt to San Diego in December for right-hander Enyel De Los Santos.

Galvis had a two-run single in a three-run first inning in the opener. Ross (6-8) allowed two runs and five hits in five innings.

"It was a grind early on," Ross said. "I had to make some adjustments and I settled in. But the offense did a good job of putting up runs early. After that, I just felt like I had to protect the lead."

Ross had been 0-5 in seven starts since beating Cincinnati on June 3, losing his previous three outings.

"He was searching for himself early, which was common for guys coming right out of the break with the longer layoff than usual," Green said. "As the game went on, I thought he looked like vintage Tyson and had his command get better and better."

Travis Jankowski and Wil Myers each had two RBIs for the Padres, who outhit Philadelphia 15-6 and stopped the Phillies' five-game home winning streak. Hunter Renfroe had three hits.

Myers hit a two-run homer in the ninth off Mark Leiter Jr. Statcast said the drive was 450 feet, the longest in Philadelphia this season.

"Any time you can get a lot of guys hitting, it becomes very contagious and it leads to success," Myers said. "The more that we can get going, the more it will trickle down to everyone else."

Philadelphia was hitless in 10 at-bats with runners in scoring position and stranded 11 runners.

"The story of the game was our inability to capitalize on run-scoring opportunities," Phillies manager Gabe Kapler said. "We had several of them. We had opportunities, bases-loaded situations. One big hit changes the outcome of that game and we weren't able to get that."

Hoskins homered in the bottom half, his first since June 29, an opposite-field drive caught by a fan in the first row above the right-field scoreboard. The home run was upheld after a video review determined the ball would have gone over even if the fan had not reached out for the grab.

Renfroe's RBI single in the fourth made it 4-1, and Jankowski boosted the lead to 7-2 with a two-run double in a three-run sixth after second baseman Cesar Hernandez failed to catch Christian Villanueva's popup to short center, a play ruled an error.