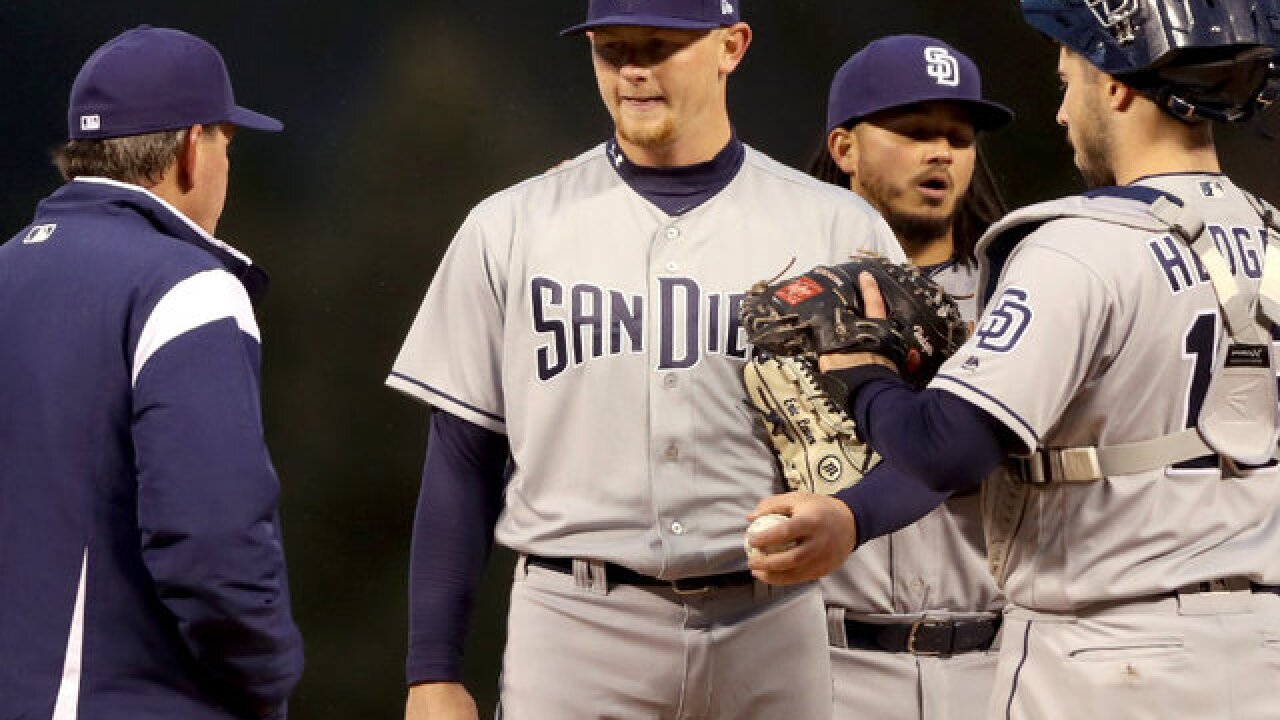 Copyright Getty Images
Matthew Stockman
Pitching coach Darren Balsley #36 of the San Diego Padres walks to the mound to confer with starting pitcher Eric Lauer #46 in the first inning against the Colorado Rockies at Coors Field on April 24, 2018 in Denver, Colorado.

Colorado outfielder Noel Cuevas notched his first major league hit -- a single down the line that looked like a sure double before he slipped on the first base bag. That's about the only stumble for the Rockies in a game delayed 46 minutes by rain on a 37-degree evening. In an effort to stay warm, Nolan Arenado and Manuel Margot resorted to wearing a ski mask in the field.

Freeland (1-3) turned up the heat as the lefty struck out a season-high eight to earn his first win since July 30. He tied for the major league lead in victories (11) among rookies last season.

There was a moment of concern when Freeland took a liner off his left heel in the fourth. He took a few warmup pitches and remained in the game.

San Diego lefty Eric Lauer (0-1) had a rough outing in his major league debut. He allowed seven runs, six earned, over three innings. He picked up his first big league hit on a bloop single.

Lauer became just the second pitcher from the 2016 draft class to make his major league debut. The other was teammate Joey Lucchesi, who made his first start on March 30, 2017.

In addition, Lauer was the 27th pitcher to make his inaugural big league start at Coors Field, including seventh as an opponent and second for the Padres (Anthony Bass on June 13, 2011).

The 22-year-old Lauer made a mistake in the second with a fastball that Story took deep to left to give the Rockies a 7-0 lead. Story's other grand slam was April 21, 2017, against San Francisco.