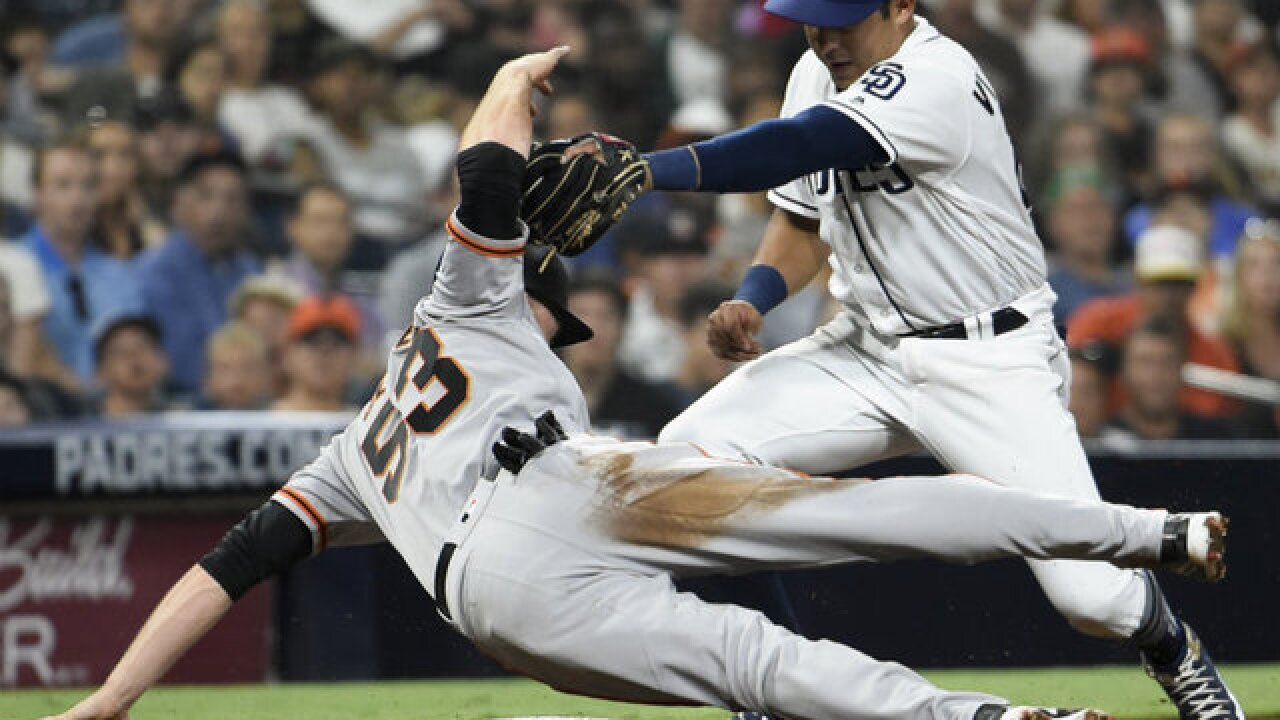 Copyright Getty Images
Denis Poroy
Austin Slater #53 of the San Francisco Giants is tagged out at third base by Christian Villanueva #22 of the San Diego Padres during the sixth inning of a baseball game PETCO Park on July 30, 2018 in San Diego, California.

The Padres had runners on first and third with one out in the 11th and failed to score. Instead, they dropped to 2-8 since the All-Star break and lost for the 13th time in 15 games. San Diego is 5-19 in July.

Will Smith (1-1) came on with runners on second and third and two outs in the 11th and struck out Carlos Asuaje. He then struck out the side in the 12th.

Hernandez homered to left on a 1-2 pitch from Matt Strahm (2-3), his 13th. The Giants got another run on Buster Posey's fielder's choice blooper.

The Giants had a scoring chance in the 10th, when Andrew McCutchen was hit by a pitch from Kirby Yates with two outs. He took third when Buster Posey's comebacker caromed off Yates' glove and the pitcher threw it away at first for an error. However, Yates got out of the jam when Evan Longoria popped up to second base.

San Diego tied it with one out in the eighth when rookie Christian Villanueva doubled in Eric Hosmer, who singled with one out.

The Giants took an early lead on Chase d'Arnaud's three-run home run after rookie lefty Eric Lauer allowed singles to Brandon Crawford and Austin Slater opening the inning. It was the fifth for d'Arnaud, who played 22 games with San Diego last year.

San Diego cut into the deficit on Hunter Renfroe's leadoff homer in the fourth, his eighth, and Manuel Margot's fly ball off the glove of left fielder Hernandez in the fifth. Margot was credited with a sacrifice fly and Hernandez with an error. It brought in Austin Hedges, who hit a leadoff double and advanced to third on a sacrifice.

Derek Holland pitched into the sixth inning for the Giants, allowing two runs and four hits, with five strikeouts and two walks. He was lifted after walking Hosmer leading off the sixth.