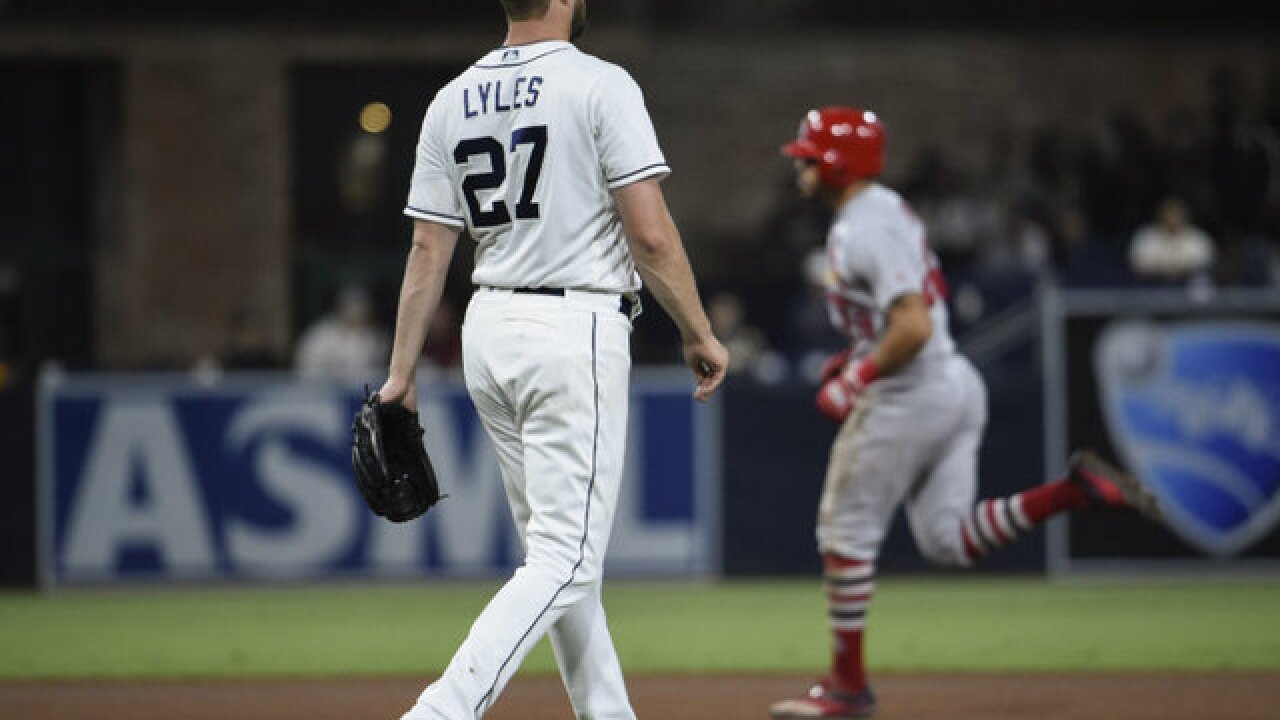 Copyright Getty Images
Denis Poroy
Jordan Lyles #27 of the San Diego Padres looks to the outfield after giving up a solo home run to Tommy Pham #28 of the St. Louis Cardinals during the fifth inning of a baseball game against the San Diego Padres at PETCO Park on May 10, 2018 in San Diego, California.

Bud Norris earned his eighth save, and the NL Central leaders opened a six-game trip with their sixth victory in eight games.

Pham singled and scored in the first inning on Jose Martinez's sacrifice fly and homered in the fifth for the Cardinals' only extra-base hit. Both hits came against Jordan Lyles (0-1).

Raffy Lopez homered against Mikolas in the seventh.

Mikolas issued his first walk in 26 innings, ending the second-longest streak in the majors this season. Ivan Nova of the Pittsburgh Pirates went 27 2/3 innings without a walk from April 10 to April 26.

Mikolas overcame the free pass to pinch-hitter Matt Szczur leading off the sixth. He exited after Lopez's second homer of the season, on his 100th pitch, sliced the score to 2-1.

Jordan Hicks got the final out of the seventh and Greg Holland worked a scoreless eighth.

Padres cleanup man Franchy Cordero had three of the five hits against Mikolas.

After Cordero's first hit, Cardinals third baseman Matt Carpenter gestured angrily that he should've caught the hard grounder that went off his glove.

Cardinals left fielder Marcell Ozuna aided Mikolas in the fourth by throwing out Jose Pirela trying to stretch a single off the left-field wall.

After that, Cordero hit his second single but was again stranded.

Hitting behind Cordero was Chase Headley, who took a .130 batting average into the game and went 0 for 3 against Mikolas.

The Padres took on Headley and his $13 million salary last offseason so they could get pitching prospect Bryan Mitchell in the same trade with the New York Yankees. Mitchell was recently demoted to the bullpen after compiling a 6.47 ERA in seven starts.

Pham's sixth home run, off a hanging breaking ball, was a 371-foot line drive over the left-field wall.