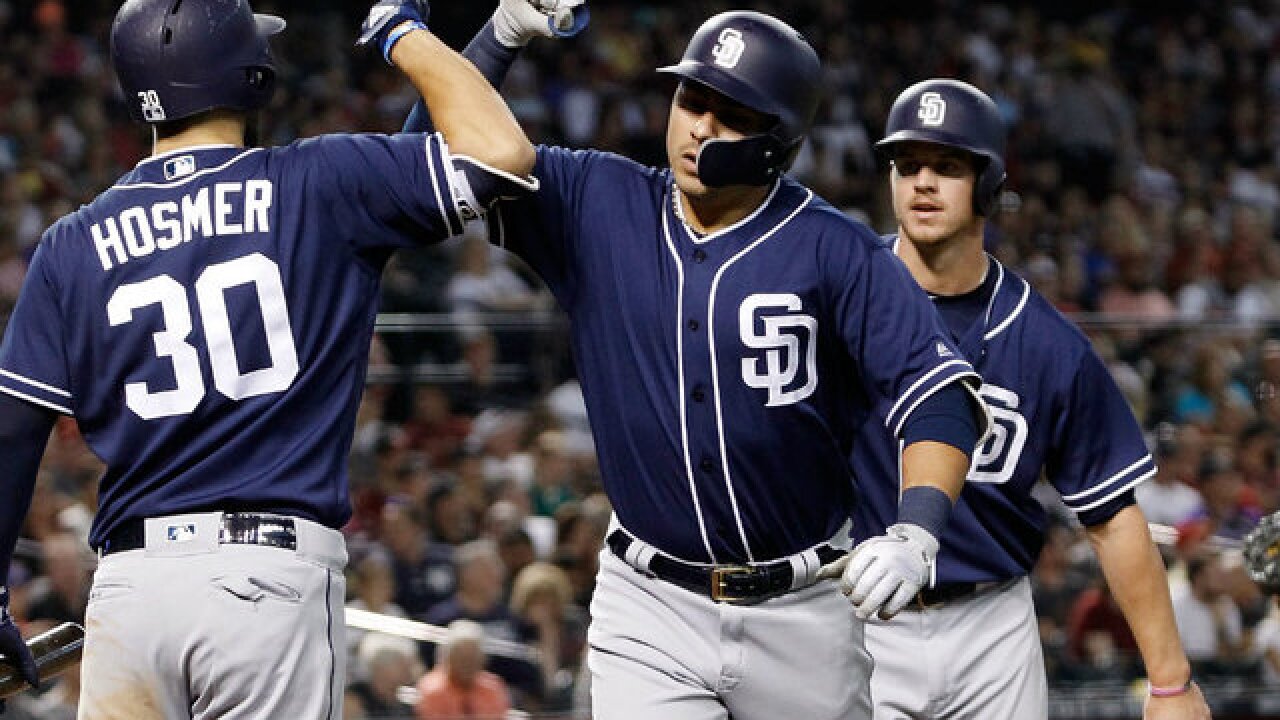 Copyright Getty Images
Ralph Freso
Christian Villanueva #22 of the San Diego Padres is congratulated by teammate Eric Hosmer #30 after hitting a two-run home run against the Arizona Diamondbacks during the sixth inning of an MLB game at Chase Field on April 22, 2018 in Phoenix, Arizona.

PHOENIX (AP) - Patrick Corbin struck out 11 in six innings to improve to 4-0 in five starts, and the Arizona Diamondbacks became the first team in 15 years to win their first seven series of a season with a 4-2 victory over the San Diego Padres on Sunday.

Nick Ahmed hit a two-run homer for the Diamondbacks, who took the last two from the Padres after losing the series opener.

The last team to win its first seven series was the San Francisco Giants in 2003. Arizona's 15-6 record matches the franchise's best start after 21 games.

Corbin (4-0), coming off a one-hit, complete-game shutout of San Francisco on Tuesday night, allowed two hits, one of them a two-run homer to Christian Villanueva, and walked one. He also singled in the last run in the Diamondbacks' four-run fourth inning. The left-hander, again displaying a dominant slider, has 48 strikeouts in five starts.

Archie Bradley survived some trouble to get the final four outs for his second save. The shortstop Ahmed made a diving stop to get the first out in the ninth. Villanueva then doubled and moved to third on Eric Hosmer's groundout before Bradley struck out Jose Pirela to end the game.

Villanueva's seventh home run of the season came on an 0-2 pitch after Corbin struck out Wil Myers but the ball sailed to the backstop and Myers reached safely, avoiding what would have been the third out.

Arizona broke a scoreless tie with Lucchesi's help in a four-run fourth.

Paul Goldschmidt drew a leadoff walk and A.J. Pollock singled. With one out and runners at first and third, Pollock broke for second and Lucchesi threw the ball wildly over the first baseman Myers' head. Goldschmidt scored and Pollock raced to third. The next batter, Ahmed, hit a two-run shot into the Arizona bullpen down the left field line and the Diamondbacks were up 3-0. Deven Marrero walked, stole second and scored on Corbin's two-out single up the middle to make it 4-0.

Corbin struck out the first two he faced in the fourth, and got Myers to wave at a slider that bounced far off the plate. By the time catcher Jeff Mathis chased it down, Myers was on first, the inning was still alive and Villanueva was at the plate.