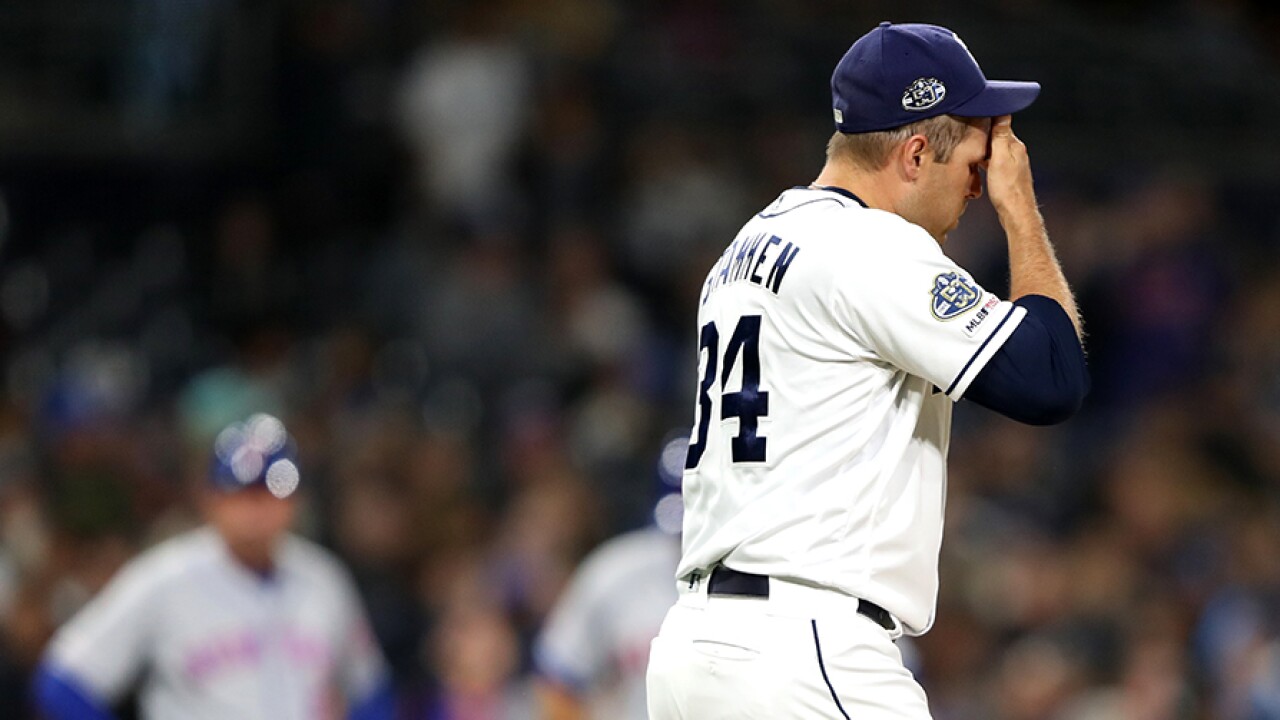 SAN DIEGO (AP) - Rookie Pete Alonso got his revenge against San Diego by hitting a 449-foot, two-run home run with no outs in the ninth inning to lift the New York Mets to a 7-6 victory over the Padres on Tuesday night.

Alonso celebrated his monster homer with a big bat flip. The shot, his 11th, came a night after Alonso struck out twice against Padres rookie Chris Paddack, who said he was "coming for" the Mets first baseman because he had won the NL's Player of the Month Award for March and April.

Robinson Cano was aboard on a single, his fourth hit of the night. Cano doubled in the first inning for his 2,500th career hit.

Alonso's homer gave the Mets a 7-5 lead. San Diego rallied for one run against Edwin Diaz in the bottom of the inning before he got Hunter Renfroe to ground out with the bases loaded to earn his ninth save.

The Padres' bullpen blew a 5-2 lead, allowing the Mets to rally for three runs on three hits and two walks in the seventh.

Alonso hit his second RBI single of the night, Michael Conforto followed with a sacrifice fly and Brandon Nimmo had an RBI double to snap out of an 0-for-28 slump.

The Mets jumped on rookie Cal Quantrill for two runs on four straight hits to open the game before the right-hander, making his second big league start, retired the side. Jeff McNeil doubled on Quantrill's third pitch and scored on Amed Rosario's single. Cano followed with a double that bounced over the fence in right-center and Alonso hit an RBI single.

The Padres got one run back in the bottom of the first on singles by Reyes and Manny Machado, and a throwing error by shortstop Rosario.

Reyes tied it with an opposite-field homer to right off Syndergaard with two outs in the third, his 10th.

Hunter Renfroe, who homered in his last two games, including a walk-off grand slam against the Dodgers on Sunday, came within a foot of a homer with one out in the fourth, settling for a double. France then homered into the seats in left to put the Padres ahead. France played for the late Hall of Famer Tony Gwynn at San Diego State and was promoted from Triple-A El Paso on April 23 after hitting .423 with nine homers and 28 RBIs in 19 games.

France was making his seventh start at third base. Machado moved over to shortstop after rookie Fernando Tatis Jr. sprained his left hamstring on April 28.

Syndergaard allowed five runs --four earned-- on nine hits in six innings, with five strikeouts and one walk. The big right-hander was coming off the rare feat of pitching a shutout and hitting a home run, which he did in the Mets' 1-0 victory against Cincinnati on Thursday. He struck out 10 and allowed four hits in his second career shutout.