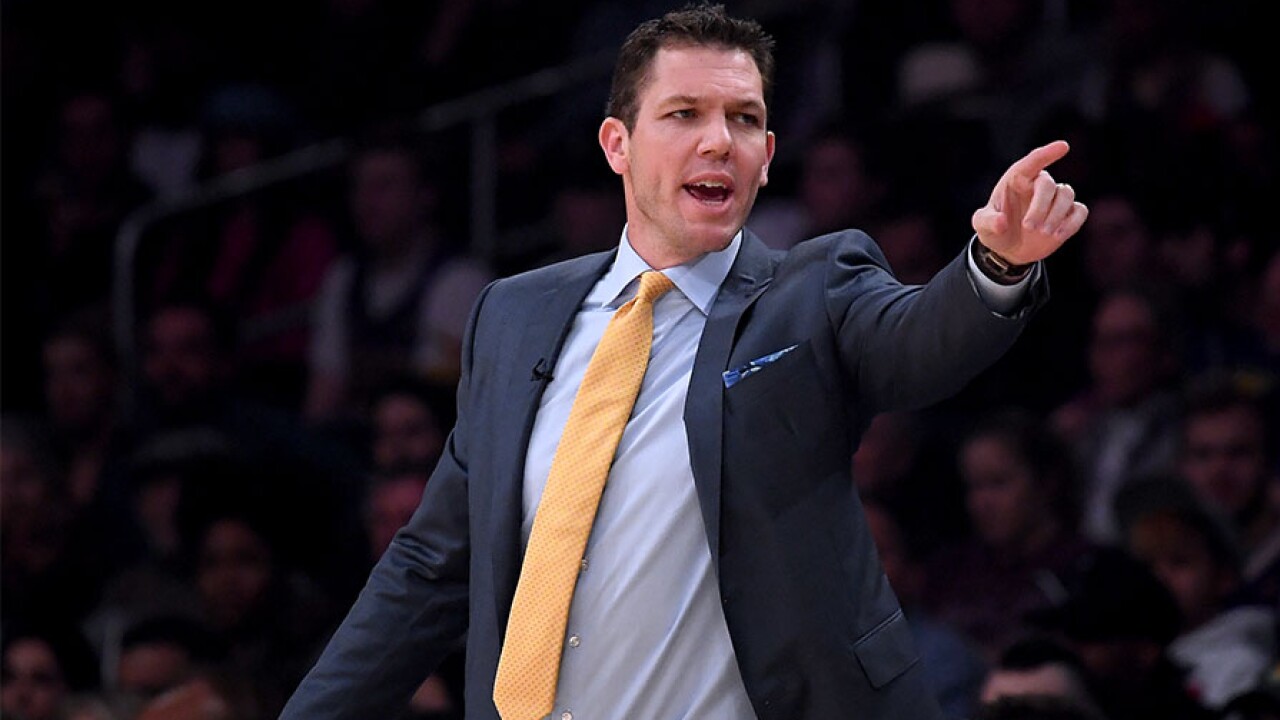 Harry How/Getty Images
LOS ANGELES, CALIFORNIA - JANUARY 21: Luke Walton of the Los Angeles Lakers during a 130-111 loss to the Golden State Warriors at Staples Center on January 21, 2019 in Los Angeles, California. NOTE TO USER: User expressly acknowledges and agrees that, by downloading and or using this photograph, User is consenting to the terms and conditions of the Getty Images License Agreement. (Photo by Harry How/Getty Images)

"The Kings and the NBA take these allegations very seriously and will collaborate to conduct a complete and thorough investigation," the team and league said in a joint statement released Thursday.

Kelli Tennant claims Walton assaulted her in a hotel room at the Casa Del Mar in Santa Monica, where he was staying while working as an assistant coach for the Golden State Warriors in 2014.

"Luke Walton retained me to defend him against these baseless allegations," Baute said. "The accuser is an opportunist, not a victim and her claim is not credible. We intend to prove this in a courtroom."

Tennant worked for the Spectrum SportsNet networks, working on baseball, basketball and soccer telecasts and studio shows for five years through 2017. She was a broadcaster on Amazon Prime's coverage of the Association of Volleyball Professionals beach volleyball tour in 2018.

Tennant now hosts a podcast she describes as "advocating for women to help them heal, grow and elevate their lives."

The Lakers announced on April 12 they and Walton "have mutually agreed to part ways" after he posted a 98-148 record in three seasons as coach. He was hired as the Sacramento Kings coach two days later.

The 6-foot-8-inch Walton played for the Lakers from 2003 through 2012 and was a member of their 2009 and 2010 championship teams. He is a son of Basketball Hall of Fame member Bill Walton.

Tennant claims in her lawsuit that Walton, whom she considered a mentor and friend, assaulted her at the hotel when she delivered him a copy of her book, for which he had written the foreword.

"Suddenly and out of nowhere, defendant Walton pinned Ms. Tennant on the bed, placing his hips and legs over her body," the lawsuit contends. "Defendant Walton then began forcing kisses on her neck, face and chest. Terrified, Ms. Tennant immediately yelled ‘Stop it,' and tried to free herself. Defendant Walton did not stop."

Tennant claims in the court papers that Walton groped her breasts and groin area, and that he "laughed at her pleas to stop."

Eventually, Walton relented and released Tennant, and when he ultimately allowed her to leave his room, he "made the disturbing statement: ‘Good to see you,"' the court papers state.