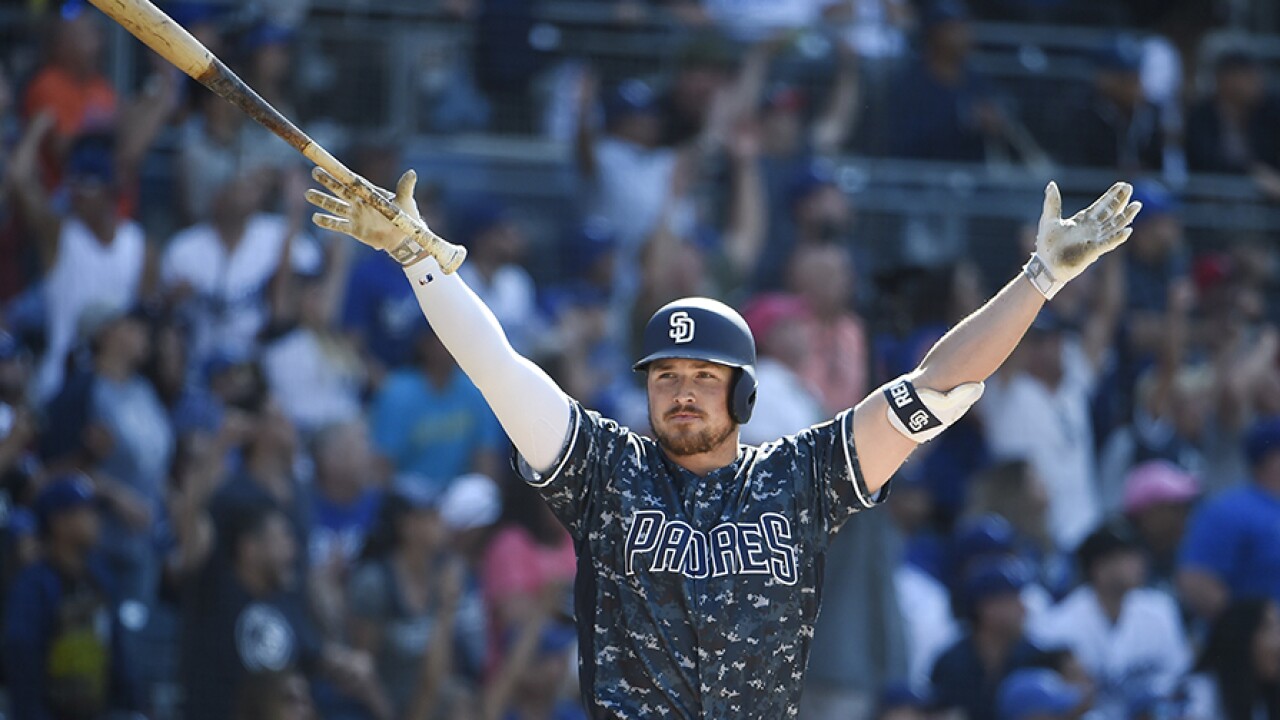 Denis Poroy/Getty Images
SAN DIEGO, CA - MAY 5: Hunter Renfroe #10 of the San Diego Padres celebrates after hitting a grand slam walk off home run during the ninth inning of a baseball game against the Los Angeles Dodgers at Petco Park May 5, 2019 in San Diego, California. The Padres won 8-5. (Photo by Denis Poroy/Getty Images)

SAN DIEGO (AP) - Pinch-hitter Hunter Renfroe hit a grand slam with two outs in the ninth inning off Kenley Jansen to give the San Diego Padres a thrilling 8-5 victory over the Los Angeles Dodgers on Sunday and avoid a three-game sweep.

Renfroe drove an 0-1 pitch into a balcony on the Western Metal Supply Co. Building in the left-field corner. He dropped his bat and raised his arms before beginning his trot.

The Padres started the winning rally with three straight singles off Jansen (2-1), who was trying for his third save in three games. Eric Hosmer hit a leadoff single to left and Manuel Margot and Wil Myers followed with bunt singles to load the bases. Jansen struck out Greg Garcia and got rookie Francisco Mejia to pop up before Renfroe's slam.

Adam Warren (2-0) pitched a perfect ninth for the win.

Chris Taylor hit a go-ahead, two-run home run in the eighth inning for the Dodgers off Robbie Erlin, his third this season and the Dodgers' fifth in the series. Max Muncy was aboard on a leadoff walk. Taylor also homered in Friday night's 4-3 victory.

Muncy got the Dodgers on the board with a three-run shot to right with two outs in the fifth off rookie lefty Nick Margevicius. Corey Seager was aboard on a walk and David Freese on a single.

Franmil Reyes hit a home run estimated at 458 feet, and Mejia drove in a run on his first career triple for the Padres.

Reyes hit a monster homer to the top of the second deck in left field with one out in the second, his ninth. It was the Padres' fifth homer of the series. It went 21 feet farther than Manny Machado's two-run homer off Clayton Kershaw in the first inning of LA's 4-3 win Friday night.

Mejia and Garcia helped give San Diego a 4-0 lead. Garcia walked with two outs in the second and scored on Mejia's triple to right. Garcia, who grew up in suburban El Cajon, doubled on Mejia's triple in the second. In the fourth, Garcia doubled to bring in Hosmer, aboard on a leadoff walk, and Mejia followed with a sacrifice fly to bring in Wil Myers, aboard on a one-out walk.