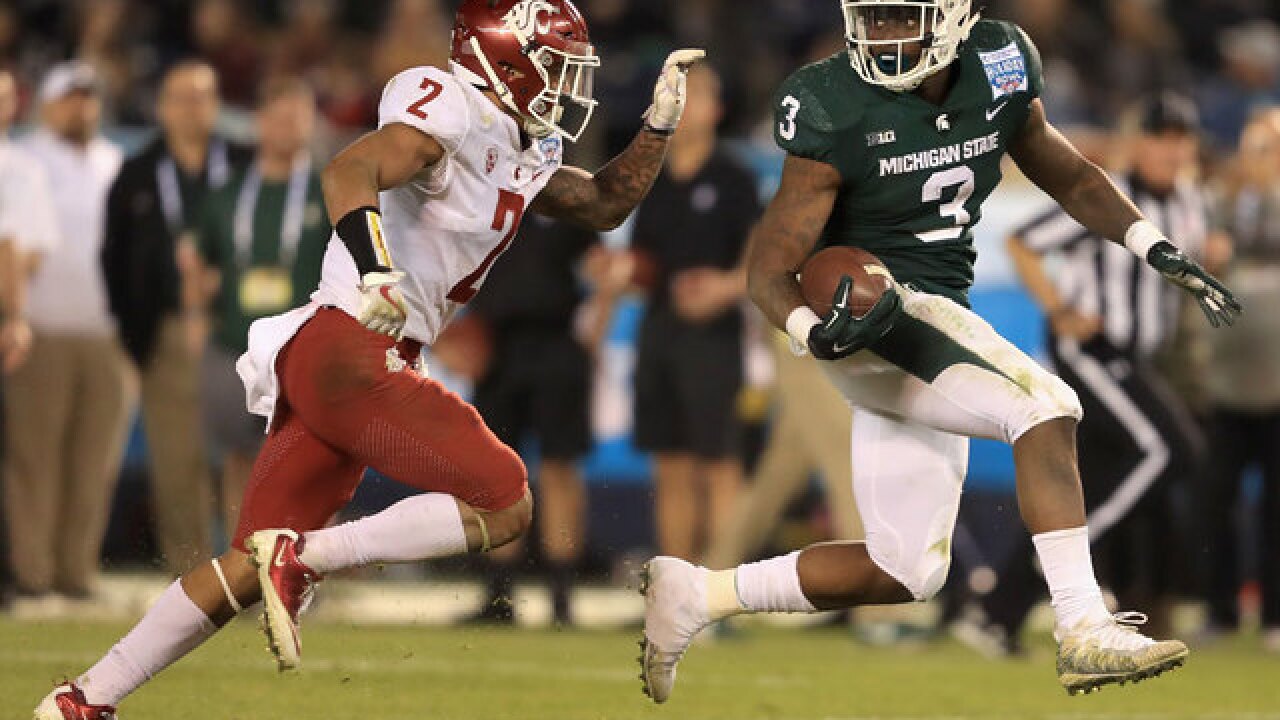 Copyright Getty Images
Sean M. Haffey
LJ Scott #3 of the Michigan State Spartans runs past Robert Taylor #2 of the Washington State Cougars for a touchdown during the second half of the SDCCU Holiday Bowl at SDCCU Stadium on December 28, 2017 in San Diego, California.

The Cougars played without record-setting quarterback Luke Falk, who missed the game because of an injury to his left (non-throwing) wrist.

Falk was in uniform for pre-game warmups, then changed into sweats when the team took to the field for the game.

Sophomore Tyler Hilinski started in place of Falk, completing 39 of 50 passes for 272 yards and two second-half touchdowns, both to Tay Martin, in his first college start.

The Spartans (10-3) scored touchdowns on five consecutive possessions in the second and third quarters as Mark Dantonio won his 100th game in his 11th season as their coach.

Lewerke threw a 15-yard touchdown pass to Cody White and a 49-yard pass to Felton Davis in the second quarter before a crowd announced at 47,092.

The Spartans drove 67 yards on 10 plays on the opening possession of the second half, with Lewerke throwing a 10-yard touchdown pass to White.

The Cougars (9-4) opened the scoring on Erik Powell's 45-yard field goal in the first quarter.

Falk entered the game second among FBS quarterbacks with 357 completions, 11 less than Mike White of Western Kentucky, which earlier finished its season. Falk was also second behind White in passes thrown with 534, 26 less than White.

Washington State was making its second consecutive appearance in the Holiday Bowl and fourth overall. The Cougars lost to Minnesota, 17-12, in 2016 and to Brigham Young, 38-36 in the 1981 game, in a game it trailed 31-7 early in the second half.

Michigan State made its first Holiday Bowl appearance and first appearance in California since the 2014 Rose Bowl Game when it defeated Stanford, 24-20.

The Holiday Bowl has annually matched teams from the Pac-12 and Big Ten Conference since 2014.

This was the first meeting between the teams since 1977. The Spartans increased their lead in the series to 6-2.