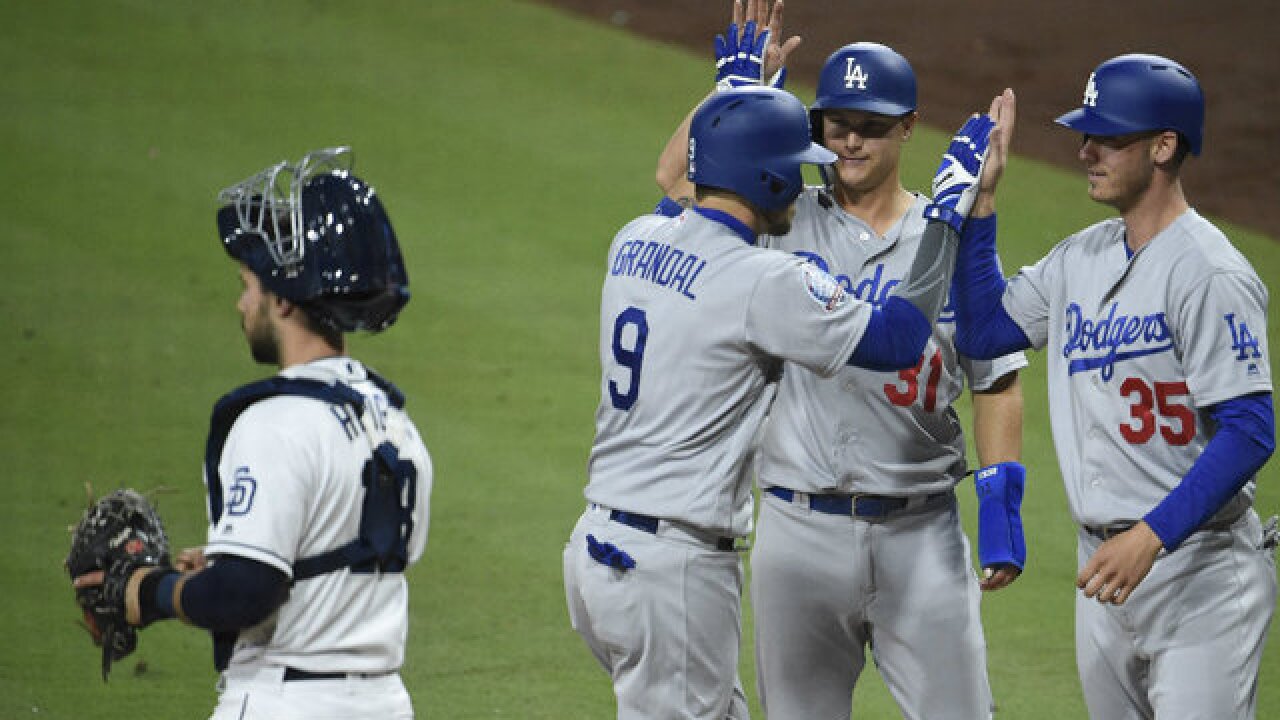 Copyright Getty Images
Denis Poroy
Yasmani Grandal #9 of the Los Angeles Dodgers is congratulated by Joc Pederson #31 and Cody Bellinger #35 after hitting a grand slam during the ninth inning of a baseball game against the San Diego Padres at PETCO Park on April 16, 2018 in San Diego, California.

Grandal, acquired from San Diego in a trade for Kemp in December 2014, hit his third career slam with two outs in the ninth off Kazuhisa Makita.

Kemp, booed by Padres fans as he came to the plate in the third, elicited cheers from Dodgers fans at Petco Park when he drove the first pitch he saw from lefty Robbie Erlin (0-2) an estimated 399 feet to left-center to highlight the inning, which was a mess for the Padres.

Third baseman Christian Villanueva and right fielder Hunter Renfroe committed errors that allowed Chris Taylor and Corey Seager to reach safely at the start of the inning. Enrique Hernandez hit an RBI single, Cody Bellinger had a base hit and Kemp launched his second home run for a 6-2 lead.

Kemp was the centerpiece of San Diego general manager A.J. Preller's wild shopping spree in the winter of 2014, acquired in a five-player trade with the Dodgers that sent Grandal to Los Angeles. That win-now approach with high-price veterans failed. Kemp was traded to Atlanta on July 30, 2016. The Braves dealt him to Los Angeles on Dec. 16.

Grandal hit an RBI double in the second, one batter after Kemp was thrown out by center fielder Franchy Cordero while trying to stretch a single.

Ryu (2-0) won his second straight start. His nine strikeouts were a season high and he walked none while allowing two runs and three hits. His only big mistake was a two-run homer by Villanueva in the second that came with Renfroe aboard on a leadoff double.

Villanueva has homered in three straight games and has six overall.

Erlin started in place of Luis Perdomo, suspended five games for his role in a brawl at Colorado on Wednesday. Erlin made his first start since April 17, 2016, against Arizona. He made three starts that season before undergoing Tommy John surgery. He missed all of last season and began this season in San Diego's bullpen.

Erlin lasted three innings, giving up six runs, four earned, and six hits while striking out four and walking one.