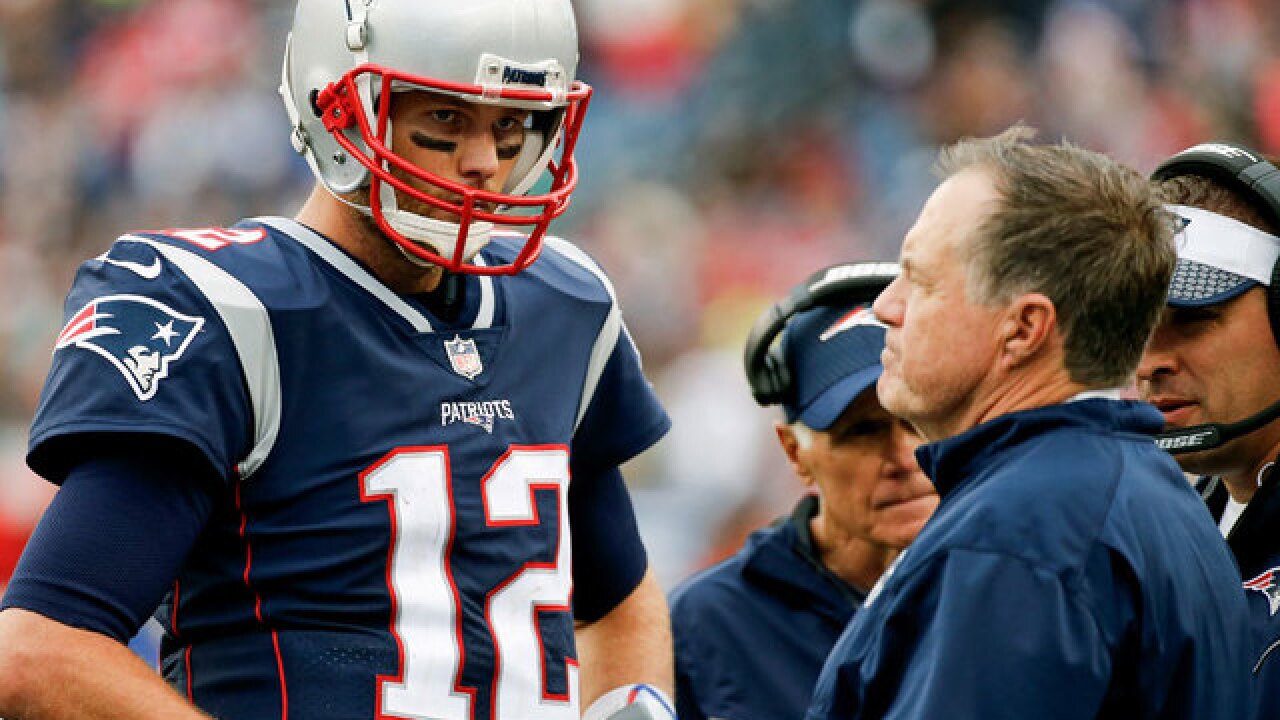 Copyright Getty Images
Jim Rogash
Head coach Bill Belichick of the New England Patriots talks with Tom Brady #12 during the fourth quarter of a game against the Los Angeles Chargers at Gillette Stadium on October 29, 2017 in Foxboro, Massachusetts.

(KGTV) - The New England Patriots' dynasty as we know it could soon be coming to an end, a new ESPN report suggests.

In a story by ESPN Senior Writer Seth Wickersham that was posted Friday, an apparent power struggle is underway between the three faces of the franchise -- owner Robert Kraft, head coach Bill Belichick and quarterback Tom Brady -- and it has created a sense of dysfunction within an organization that has seen consistent success for nearly 20 years.

According to Wickersham's report, despite the Super Bowl wins and the glory that comes with it, some within the Patriots organization believe the seemingly deteriorating relationship between Belichick and Brady, and Belichick and Kraft, is a sign that the end of the team's reign at the top could be over soon.

-- Brady and Belichick have been at odds over the star quarterback's relationship with his personal trainer/business partner Alex Guerrero. Belichick reportedly disagreed with players seeking Guerrero's advice, instead of the team's medical staff, on injuries and treatment. Guerrero's access to the team was eventually revoked by Belichick, possibly straining the coach's relationship with his quarterback.

-- After many years together, Belichick has been unusually open with his criticism of Brady's play this season. The nitpicking of his coach this year has reportedly irritated the quarterback.

-- Belichick was a supporter of backup quarterback Jimmy Garoppolo and was not actively looking to trade him, despite the fact he was on the final year of his contract and possibly looking to find a starting job in 2018. Many, including Belichick (reportedly), saw "Jimmy G" as the Patriots' next great QB, but their current great QB made it known he intended to play well into his 40s and not relinquish his starting role. Wickersham reported Kraft, on Brady's side in this situation, met with Belichick in October and forced him to trade Garoppolo.

-- While Belichick was upset over having to trade Garoppolo, Wickersham reported Brady seemed pleased with the decision. According to the story, Kraft has second-guessed the trade given Garoppolo's success with his new team, the San Francisco 49ers.

The Patriots responded to the story, telling ESPN there are "several inaccuracies and multiple examples given that absolutely did not occur."

Hours after the story was published, Kraft, Belichick and Brady issued a joint statement released by the team:

"For the past 18 years, the three of us have enjoyed a very good and productive working relationship. In recent days, there have been multiple media reports that have speculated theories that are unsubstantiated, highly exaggerated or flat out inaccurate. The three of us share a common goal. We look forward to the enormous challenge of competing in the postseason and the opportunity to work together in the future, just as we have for the past 18 years. It is unfortunate that there is even a need for us to respond to these fallacies. As our actions have shown, we stand united."

NFL Network reporter Tom Pelissero tweeted a statement from Don Yee, who represents Brady and Garoppolo, in response to the ESPN story:

Statement from Tom Brady's agent, Don Yee, on ESPN report about #Patriots power struggle: "I don't really know what to say — it's tough to have a response since it didn't appear to me to have one on-the-record quote. All I can suggest is don't believe everything you read."