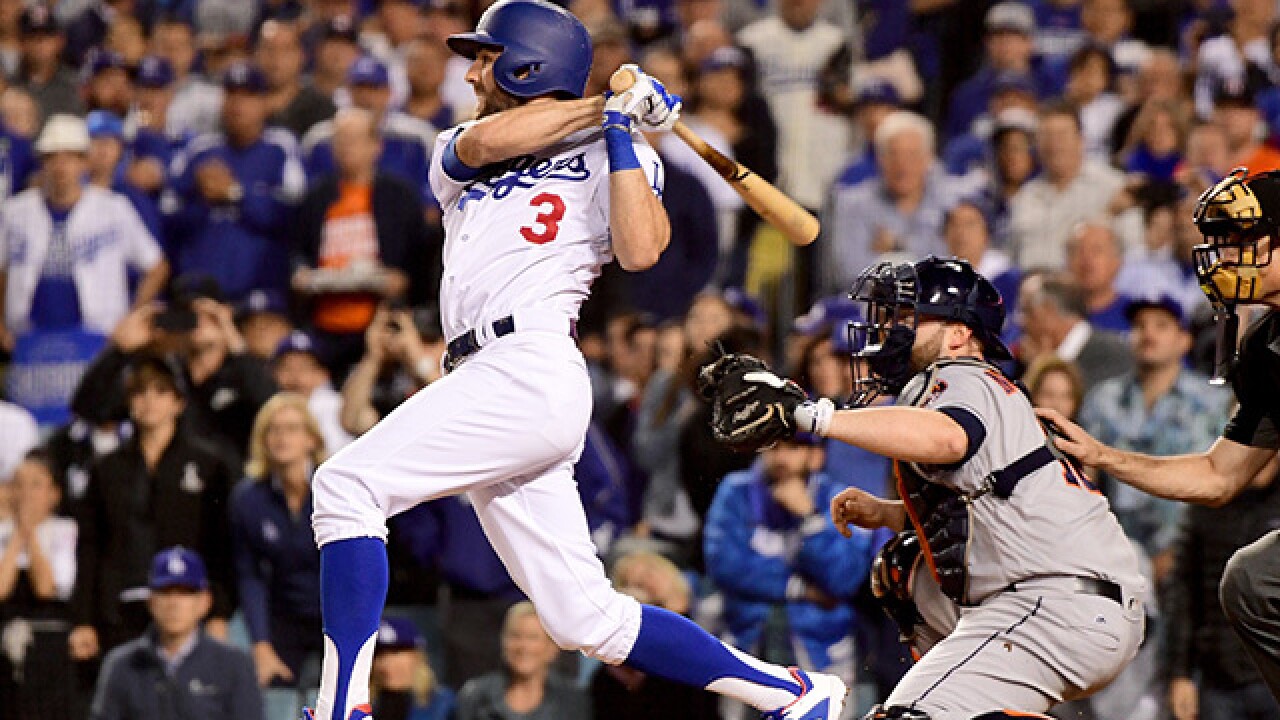 Image copyright 2017 Getty Images. All rights reserved. This material may not be published, broadcast, rewritten, or redistributed.
Harry How
<p>LOS ANGELES, CA - OCTOBER 31: Chris Taylor #3 of the Los Angeles Dodgers hits a RBI double to score Austin Barnes #15 (not pictured) during the sixth inning against the Houston Astros in game six of the 2017 World Series at Dodger Stadium on October 31, 2017 in Los Angeles, California. (Photo by Harry How/Getty Images)</p>

LOS ANGELES (CNS) - The Los Angeles Dodgers forced a seventh and deciding game in the World Series as four relievers shut out the Houston Astros over the final 4 1/3 innings in a 3-1 victory tonight at Dodger Stadium.

Corey Seager drove in the tie-breaking run in the sixth inning with a sacrifice fly and Joc Pederson hit a solo homer with one out in the seventh as the Dodgers tied the best-of-seven series at three games apiece.

Tony Watson, the third of five Dodger pitchers, was credited with the victory, pitching one-third of an inning. Kenley Jansen retired all six batters he faced for the save, throwing strikes on 18 of his 19 pitches.

The Dodgers scored twice in the sixth. Austin Barnes led off with a single and moved to second when Chase Utley was hit by a 1-2 change-up thrown by Justin Verlander. Chris Taylor's double drove in Barnes and advanced Utley to third. Utley scored on Seager's sacrifice fly.

The Astros opened the scoring in the third inning on George Springer two-out solo homer.    Manager Dave Roberts removed starter Rich Hill with two outs in the fifth and the bases loaded. Brandon Morrow induced Alex Bregman to ground out to end the inning. Hill allowed one run and four hits in 4 2/3 innings, striking out five and walking one, intentionally.

Verlander, the Houston starter, was charged with the loss, allowing two runs and three hits over six innings, striking out nine and not walking any batters. He allowed one baserunner through the first five innings -- Yasiel Puig, who singled with one out in the second and did not advance.

Verlander entered the game with a 9-0 record and 1.53 ERA since being obtained by the Astros Aug. 31 in a trade with the Detroit Tigers. Wednesday's game will be the first time a World Series Game 7 has been played at Dodger Stadium. This will be the Dodgers' first World Series Game 7 since 1965 when Sandy Koufax pitched a three-hitter, striking out 10, in a 2-0 victory over the host Minnesota Twins.

The Dodgers lost three Game 7s in best-of-seven series when they were based in Brooklyn, all to the New York Yankees. The Dodgers defeated the Yankees, 2-0, in Game 7 of the 1955 Series to win their only World Series championship in Brooklyn.

This will be the third time a World Series will conclude at Dodger Stadium, joining the 1978 and 1963 Series.

This was the second Game 6 to be played at Dodger Stadium. The other was in 1978 when the New York Yankees defeated the Dodgers 7-2 to win their second consecutive World Series title. The Dodgers swept the 1963 Series from the Yankees, their only World Series sweep.

The team issued a reminder to fans that masks and toy weapons of any kind were strictly prohibited at Dodger Stadium.