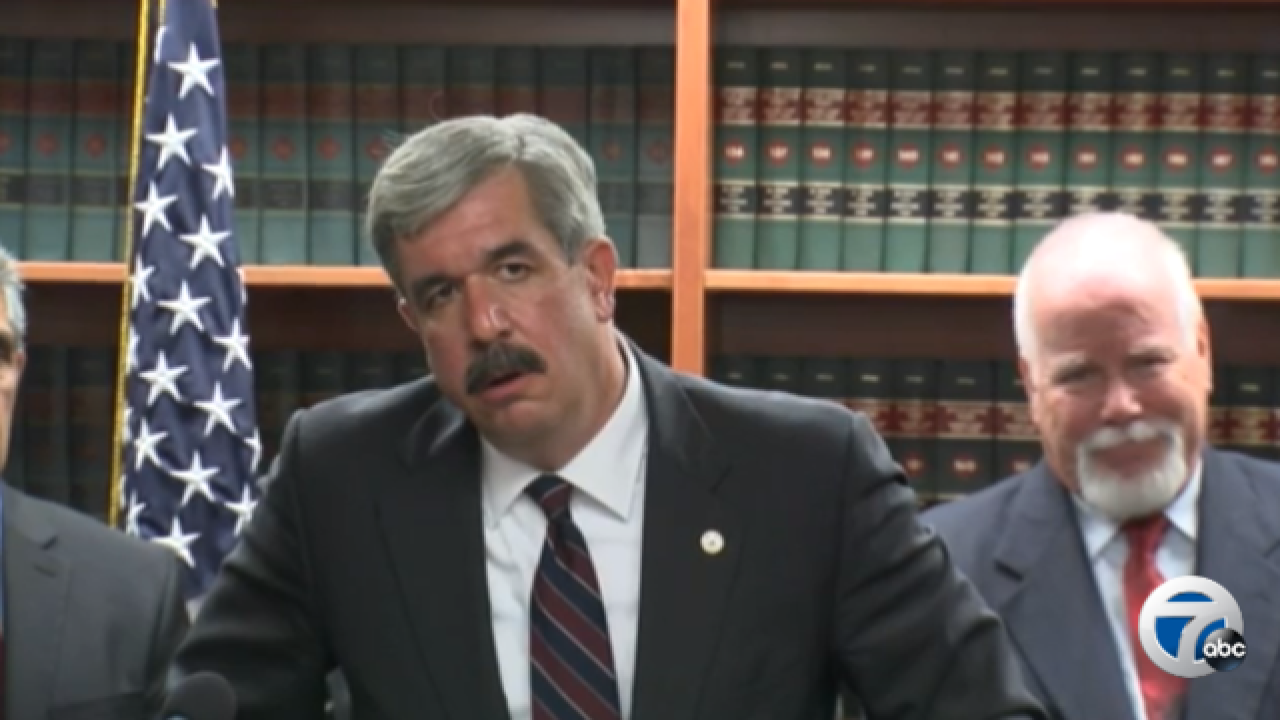 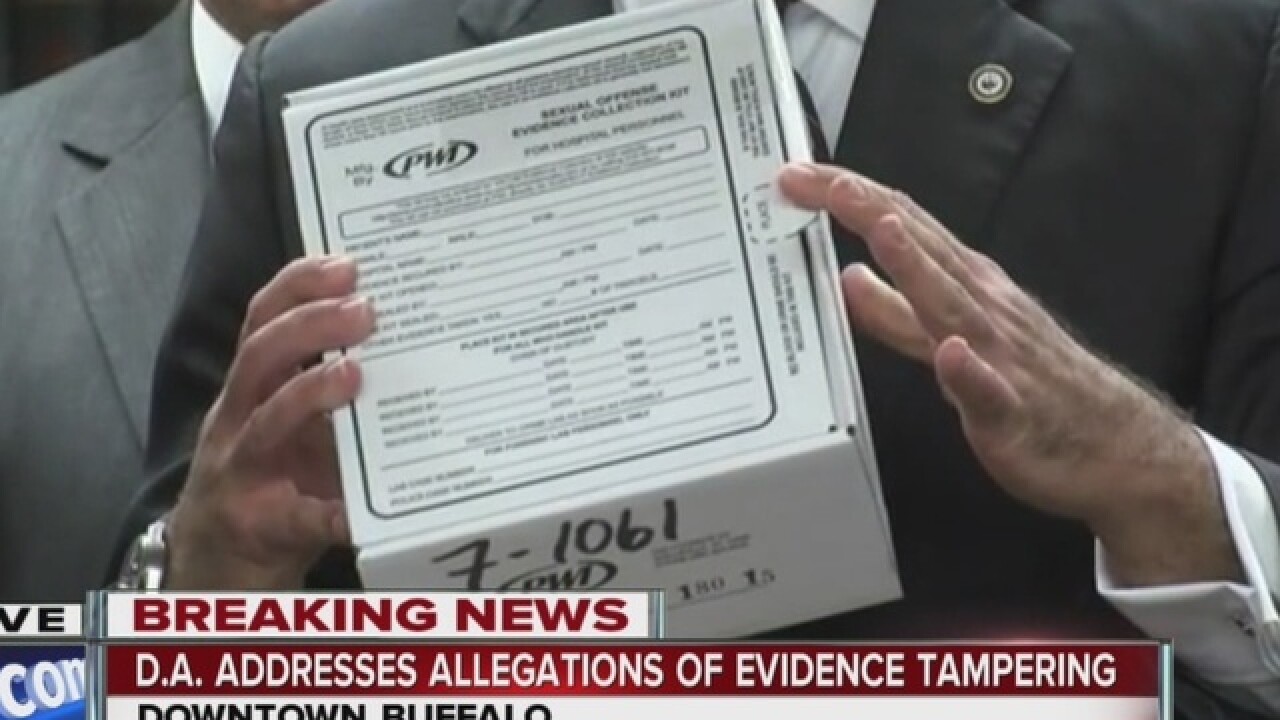 After the attorney for Patrick Kane's accuser made stunning allegations regarding the "rape kit evidence bag" in the case, only to later drop his client saying he doubted the story behind the bag, the Erie County District Attorney is speaking publicly.

Frank Sedita addressed the media at 11 a.m. on Friday. He said he will not address the ongoing investigation into what possibly occurred on August 2 between the accuser and the NHL star, but he did say the bag Eoannou presented never contained the rape kit.

Sedita said a rape kit in Erie County is a box, not a bag, and is never placed in a bag or submitted in a bag. He showed an example of a rape kit and the actual rape kit used in the case, clearly showing it was a box -- not a bag.

He said the rape kit was opened at 9:30 a.m. on August 2 by the sexual assault nurse examiner. It was sealed at 11:39 a.m. and turned over to Hamburg Police one minute later. Hamburg Police then turned it over to the crime lab at 12:06 p.m. Sedita played video of the box's delivery and it being placed in an evidence locker.

The investigation team Sedita assembled tracked the clear plastic bag the "rape kit evidence bag" was placed in down to the manufacturer. Eoannou later admitted it was from his office.

As for the brown bag, Sedita said the accuser went home in the morning on August 2 and changed her top. She then went to ECMC accompanied by her mother. At the hospital, her mother was given the brown bag and was asked by the nurse to put the top the accuser was wearing inside the bag for later collection by police.

Sedita said the accuser's mother is the last known person to be seen with the bag and the same person who purportedly "discovered" the brown bag on her doorstep. Sedita made it clear that the forensic evidence in this case has not been tampered with or compromised.

"We believed the complainant's mother has engaged in an elaborate hoax," Sedita said. The DA says he will be looking at the law closely to see if criminal charges can be filed, but it is unlikely the mother will face criminal charges, even if she misrepresented what took place, because there is no law against what she did. Sedita said she has denied her involvement.

This all started after the accuser's former attorney Thomas Eoannou held a press conference Wednesday at his law office saying the "rape kit evidence bag" used in the case was anonymously delivered to the home of the accuser's mother.

Eoannou initially claimed that this was "done to discredit my client in the public." But just 24 hours later, Eoannou dropped his client saying, "I was brought the bag by my client's mother who explained to me how she found the bag. My investigation reveals to me that I do not have confidence in that version. Our investigation looking into it revealed that there may have been some fabrications concerning the bag."

After Eoannou's press conference Thursday about the "rape kit evidence bag," the alleged victim's family gave this statement to the Associated Press: "While we are disappointed that Mr. Eoannou has withdrawn from his role providing advice and counsel in the criminal investigation of Patrick Kane, we have every intention of pursuing this case to a just conclusion. It must be emphasized that there exists no evidence or allegation that the accuser herself had any knowledge of the evidence bag until it was brought to Mr. Eoannou's office."

Patrick Kane's attorney Paul Cambria then responded to the latest developments in the case. He reiterated what he had said the day before.

"Well frankly, if you think about it, as I indicated yesterday, science was clear, the testing that was done here exonerated my client," Cambria told reporters. "I think from the statements Mr. Eoannou made today, somebody attempted to use him to fabricate - or to obstruct and undermine the science and he obviously now has made a very clear statement that he had to withdraw."

After Sedita's press conference on Friday, Cambria said even more, saying it was clear that this was an attempt to undermine the DNA results, which were favorable to Kane and inconsistent with the accusations made against his client.

"I think it's a critical fact that Mr. Sedita shared with us today that this girl knew an item of her clothing was what was in this bag," Cambria said. He added that this critical fact should loom large in the investigation going forward, saying Kane's accuser knew where the bag was from, knew what was in it because she was in the hospital with her mother, and made no attempt to stop this hoax from going forward.

As for whether the accuser's mother should face charges, he said "at the bare minimum, this is an attempt to obstruct justice here."

Cambria said he wants to see the case halted and not brought to a grand jury. He says Kane's DNA was not found on the victim from the waist down, though Eoannou said that was not true. Both attorneys said no settlement talks have occurred.

The Chicago Tribune is reporting a key witness in the case now "appears to be reluctant to testify."

The Tribune explains, based on its sources, the witness is a female friend of the accuser. She left SkyBar in Buffalo with the accuser, Kane and one of his friends early last month. They all went back to Kane's home in Hamburg.

More than a month after rape allegations surfaced, the Tribune reports the female friend no longer backs the accuser's story.

But 7 Eyewitness News spoke to the attorney for the accuser's friend, who disputes the Tribune article. The attorney said the friend “is not reluctant to testify. She has already been interviewed by police and will continue to cooperate fully.” It is unclear if she has given a sworn statement.